By BAVANI M and YVONNE NATHAN

A backhoe tractor from DBKL tearing down a row of seven stalls operating illegally in a private open-air parking lot along Jalan Tun Sambanthan in Brickfields.

While the local authority celebrated several wins over this past year, it also faced a couple of lawsuits from stakeholders

As THE year draws to a close, we look back on the past 12 months of Kuala Lumpur and its progress; 2017 is definitely a year of ups and downs for Kuala Lumpur City Hall (DBKL).

The local government saw many positive things to shout about this year with new projects launched, new regulations implemented, new attractions introduced and plenty of accolades to boot.

But the city took some bruising towards the middle and end of the year when it was also the target of law suits and protests by its citizens and stakeholders. At least three groups have sued DBKL over issues pertaining to over-development, encroachment and parking.

Here’s a look at some of the highlights and low points of the year at DBKL.

This year started with the ban on polystyrene in Kuala Lumpur, with a warning to businesses to start using biodegradable food packaging.

Although enforcement only started in September, it was reported that 80% of businesses had begun embracing the green way of life.

However, DBKL did not fare too well with its ruling on grease traps that was supposed to take effect in January as well.

DBKL is still facing problems with restaurants not cleaning their grease traps properly.

Kuala Lumpur mayor Tan Sri Mohd Amin Nordin Abd Aziz had said that installation and maintenance of the traps would be carried out by nine contractors appointed by DBKL, with the cost to be charged under the premises’ licence renewal fee. After making it compulsory for restaurant owners to pay for grease trap maintenance fee, DBKL then faced a hiccup with the appointment of contractors to carry out the cleaning job.

It is now learnt that the programme will only start early 2018.

DBKL also introduced a new rule whereby 50% equity in all businesses in the city must be owned by Malaysians. They must also ensure that 50% of hired workers are Malaysians.

DBKL Licensing and Petty Traders Management Department director Ibrahim Yusof said this was to break the monopoly that foreigners currently held in parts of the city.

He said Jalan Silang and Jalan Tun Tan Cheng Lok were being monopolised by foreign traders. Even though the ruling only applied to new businesses, many were still unclear over its terms and conditions. 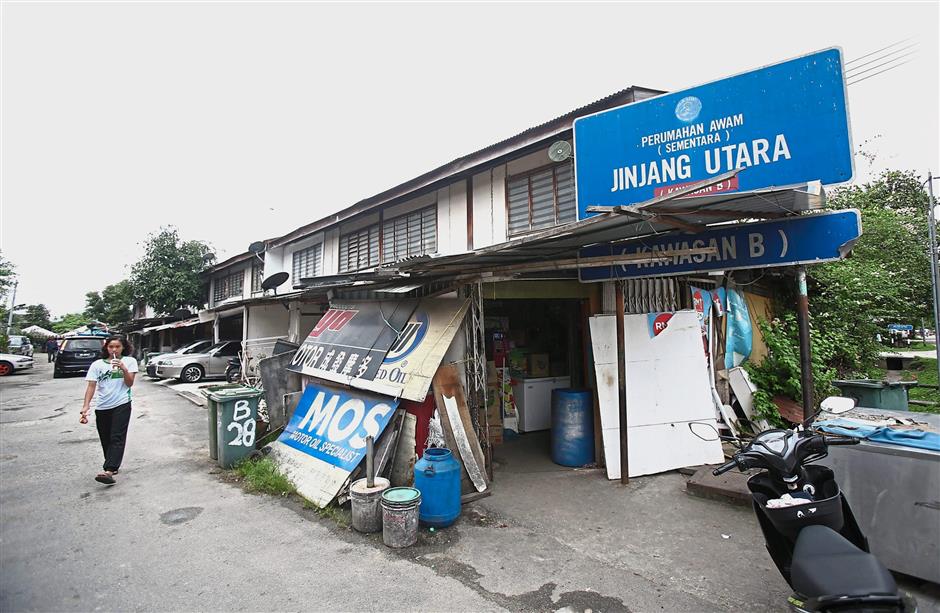 At the beginning of the month, the city took a blow when Federal Territories Minister Datuk Seri Tengku Adnan Tengku Mansor announced that the Kuala Lumpur City Plan 2020 (KLCP2020) draft would not be gazetted as planned. The minister was quoted as saying he would not sign or approve the plan as there was room in it for abuse. The draft plan is a blueprint for development in Kuala Lumpur.

But he brought good news to longhouse residents in the city. Bukit Kiara Estate, Jinjang Utara and Ikan Emas residents were told that they would get brand new homes at a fraction of the cost. The news was welcomed with much rejoicing.

The start of March was dramatically marked by a call by several MPs for Tengku Adnan to step down after his statement that the KLCP2020 draft might not be gazetted.

What quickly followed was a lawsuit filed by 11 Taman Desa residents on March 13 for a judicial review of DBKL planning permissions on a proposed development.

DBKL was said to have granted a development order for the project on the same day, holding discussions for a draft Kuala Lumpur City Plan 2050 several days later.

April – End of an era

The well-received MUD-The Story of Kuala Lumpur musical ended its run after almost three years, leading to the city’s oldest theatre -- Panggung Bandaraya DBKL -- to open up for rent on April 15.

A few days later, the 47-year-old Kuala Lumpur City Hall Sports Club was torn down to be rebuilt at a cost of RM50mil. The new sports club is estimated to be completed by 2020. 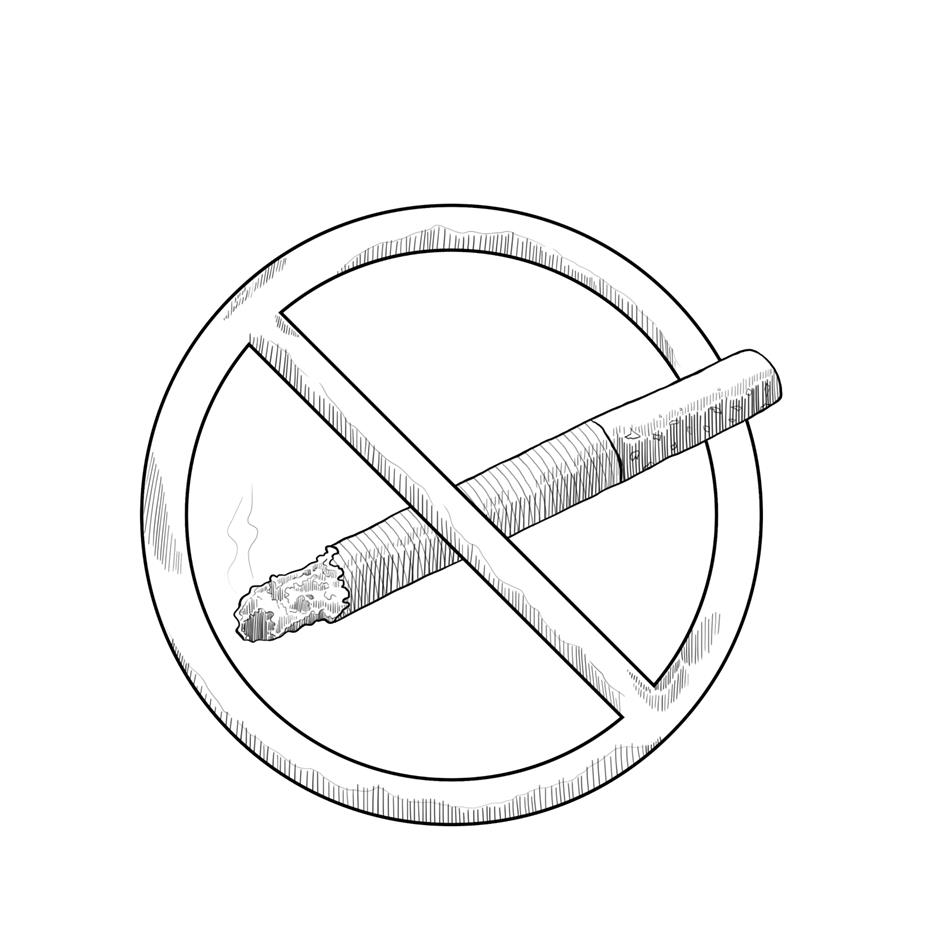 Issues surrounding a proposed development in Taman Tun Dr Ismail continued to heat up, culminating in an online survey that was removed after 93% of poll respondents selected Taman Rimba Kiara as their go-to recreational park.

The squatters who had lived in Jinjang Selatan Tambahan since 1969, failed in their appeal and were evicted. DBKL turned up in full force with bulldozers and police trucks to demolish 11 structures on May 26.

DBKL announced a smoking ban on 141 pedestrian and elevated walkways besides covered bridges across a 20km radius of the city, following the ban on smoking in public parks effective January.

Another report was filed with MACC in June, this time by 10 residents of Bandar Tun Razak over the sale of a football field in Cheras gazetted as reserved land for public use.

The Volunteer For Kuala Lumpur (V4KL) @Unity programme was launched to encourage volunteerism and as a platform for racial unity among youths.

This month also saw the Taman Tugu project’s 27ha urban forest park in the city receiving all the key approvals needed to kick it off.

The tender process also commenced for the north-east region of the park including food stalls, besides the supply, planting, maintenance and warranty of the trees. 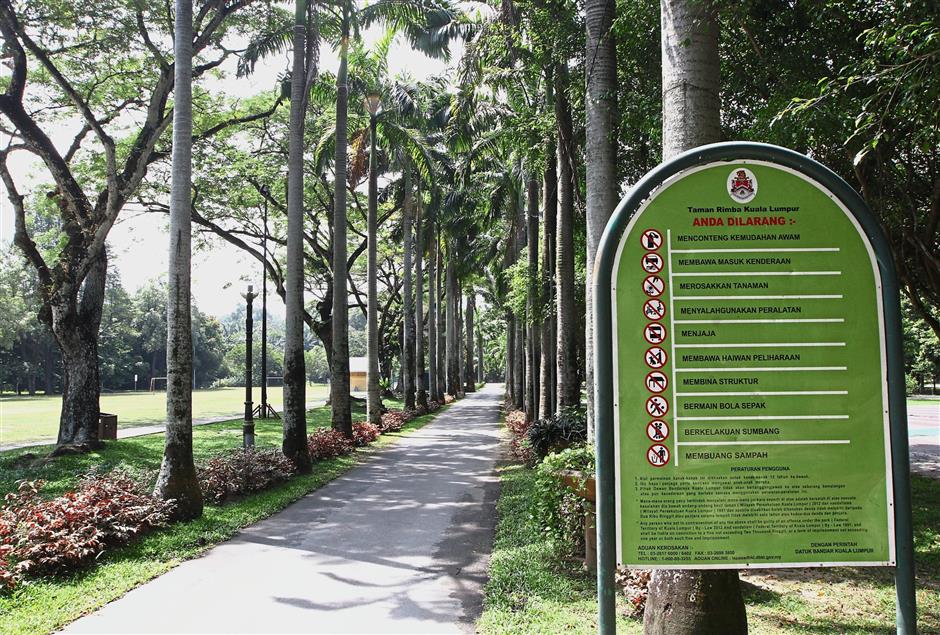 Amin Nordin’s tenure, which was ending on July 18, was extended for another two years.

Promising to end the presence of illegal businesses in the city, the mayor ordered the removal of illegal stalls after receiving numerous complaints against stalls operating in a carpark in Brickfields.

The unlicensed stalls located in the private open-air carpark, were said to have started operations about five years ago and were sub-let to mostly foreigners.

Enforcement officers at the scene said DBKL issued notices as early as July 3 to the traders there to cease operations. 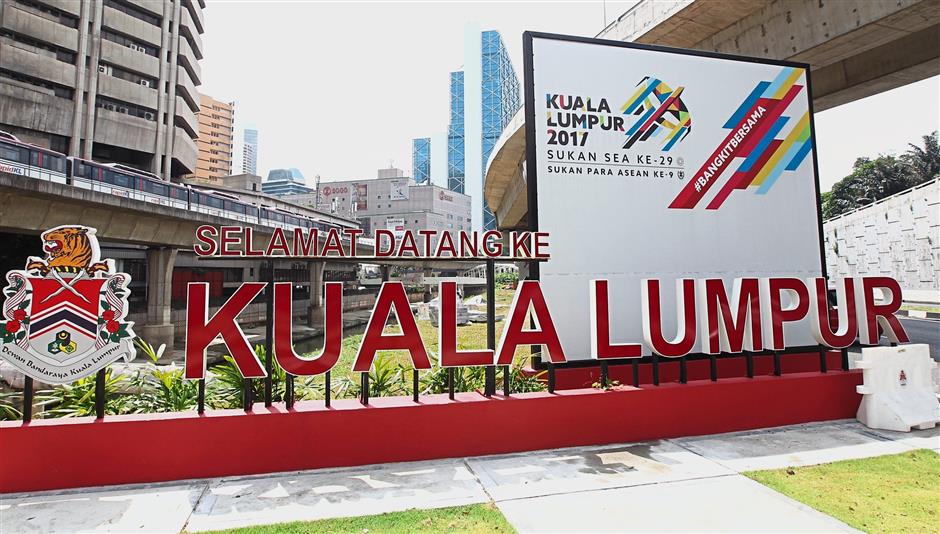 The city hosted the 29th SEA Games from Aug 19 to 30. DBKL was responsible for the accommodation and food as well as urban beautification projects. More than 4,000 volunteers were recruited to help clean up and paint road kerbs before the Games.

Dataran Merdeka, Stadium Titiwangsa, Taman Pudu Ulu and the football stadium in Kuala Lumpur were upgraded by DBKL to prepare them for events such as archery, sepak takraw, petanque and football.

As part of the beautification exercise, the city built an archway at the Kuala Lumpur-Selayang border in Jalan Kuching.

Welcome signboards were put up at seven locations in Jalan Kuching, Jalan Semantan, Stadium Titiwangsa and the Bandaraya LRT station near Jalan Raja Laut and from Jalan Sungei Besi to Jalan Istana. Malaysia last hosted the SEA Games in 2001. 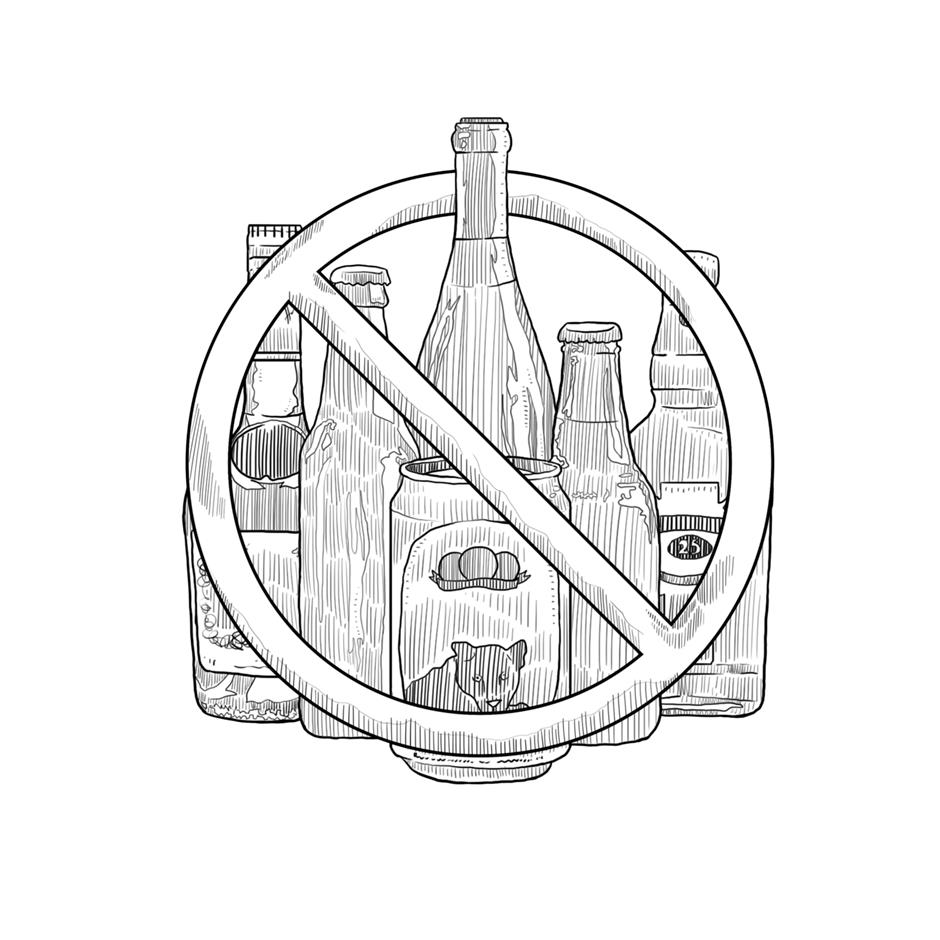 Perhaps the hottest topic of the month was the cancellation of Better Beer Festival 2017 that was scheduled for Oct 6 and Oct 7. Political sensitivity surrounding the event was cited as the reason.

The festival, which would have been Malaysia’s largest craft beer festival, was initially slated to take place in Solaris Damansara, until DBKL rejected the permit application. 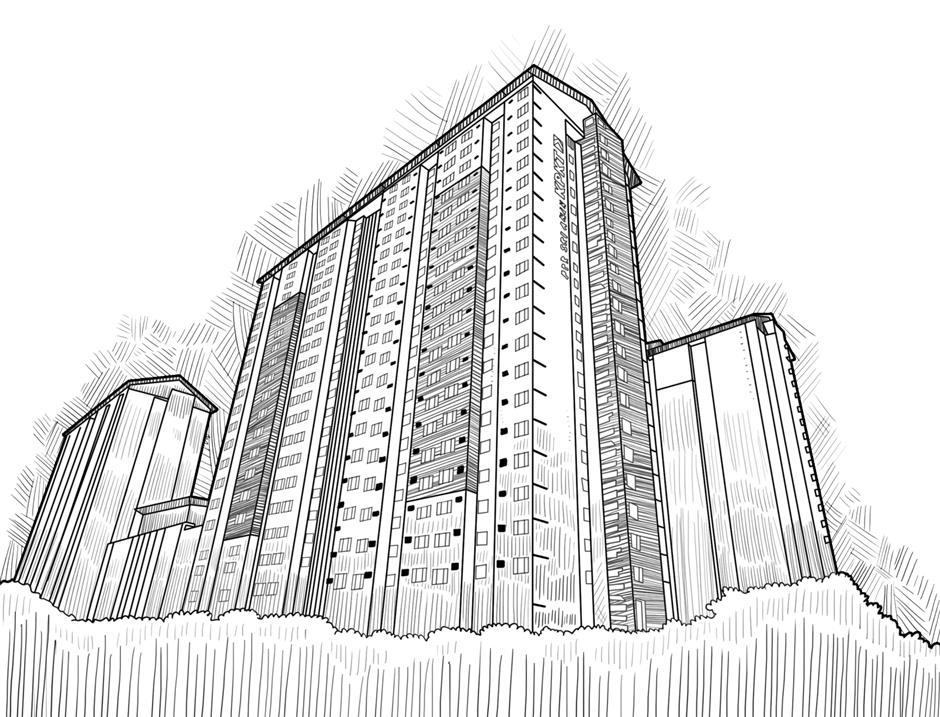 Notable was the Deepavali celebration by residents of the Jinjang Utara longhouse, who finally got to enjoy the Festival of Lights in their brand new flats in PPR Seri Aman, Kepong.

Keeping to its promise in February, DBKL presented 770 families keys to their new abode. Though only about 20 moved in in October, many were expected to move in within the next few months.

It was a relief for the families who had spent 26 years living in cramped quarters in the longhouse as they waited for their promised new homes.

DBKL introduced new building guidelines that would take effect next year, whereby buildings over five storeys high must undergo periodic inspection every 10 years to ensure that owners are held accountable for their properties.

Periodic inspection is now mandatory after the 10th year of commencement of the certificate of fitness (CF) and certificate of completion and compliance (CCC). The onus is on the building owner to hire a professional engineer to prepare and submit the report to DBKL.

Kuala Lumpur also received commendation for being ranked number four out of 51 cities on the Expat City Ranking 2017, with Manama in Bahrain, Prague in Czech Republic, and Madrid in Spain taking the top spots in the ranking in the annual Expat Insider survey.

Kuala Lumpur is followed by Amsterdam, Barcelona, Johannesburg, Bangkok and Basel with Frankfurt in the 10th spot.

Another huge decision that affected the city was the Government’s directive to DBKL to freeze approvals for four types of developments, effective Nov 1, following a study by Bank Negara that showed a glut in such buildings. They consisted of shopping complexes, offices, serviced apartments and luxury condominiums priced over RM1mil.

However, the decision was reversed a month later with the mayor saying that a blanket ban to freeze four types of high-end developments in the country would not be implemented in Kuala Lumpur yet. 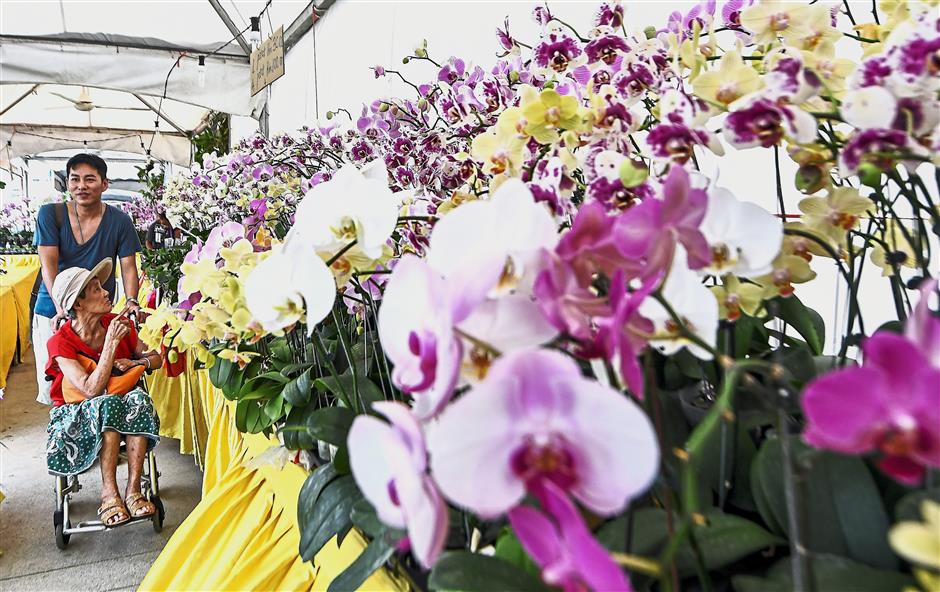 The city hosted the Kuala Lumpur Orchid and Bonsai Show 2017 (KLOBS) where 14 countries in Asia showcased their floral expertise at the exhibition in Taman Pudu Ulu, Cheras.

Five hundred orchid species from around Asia were also featured in the exhibition. In addition, there were activities such as flying fox and wall climbing, pony rides, photo and painting competitions as well as futsal or netball tournaments at the show venue.

It was also the month when city folk took to the streets in a series of peaceful protests in an attempt to get the powers-that-be to hear their dissatisfaction over issues such as overdevelopment and corruption.