Enthusiastic cyclists being flagged off by Salleh (right) as they aim to explore KDCFR’s newest trail.

The Salleh Trail, which was previously open only to hikers, can now be used by cyclists, thanks to a collaboration between Persatuan Rimba Komuniti Kota Damansara (KDCF Society) and Yayasan Sime Darby (YSD).

The trail is named after KDCFR honorary adviser and former Malaysian Nature Society (MNS) president Tan Sri Salleh Mohd Nor in recognition of his role in nature conservation in Malaysia.

YSD chief executive officer Yatela Zainal Abidin said YSD had contributed towards the realignment and refurbishment of the trail and would support its maintenance until 2021.

“The trail offers an opportunity for nature lovers and frequent visitors to discover another perspective of the forest reserve,” Yatela said.

The forest reserve is a popular recreational site among the community with about 1,000 to 2,000 visitors a week. 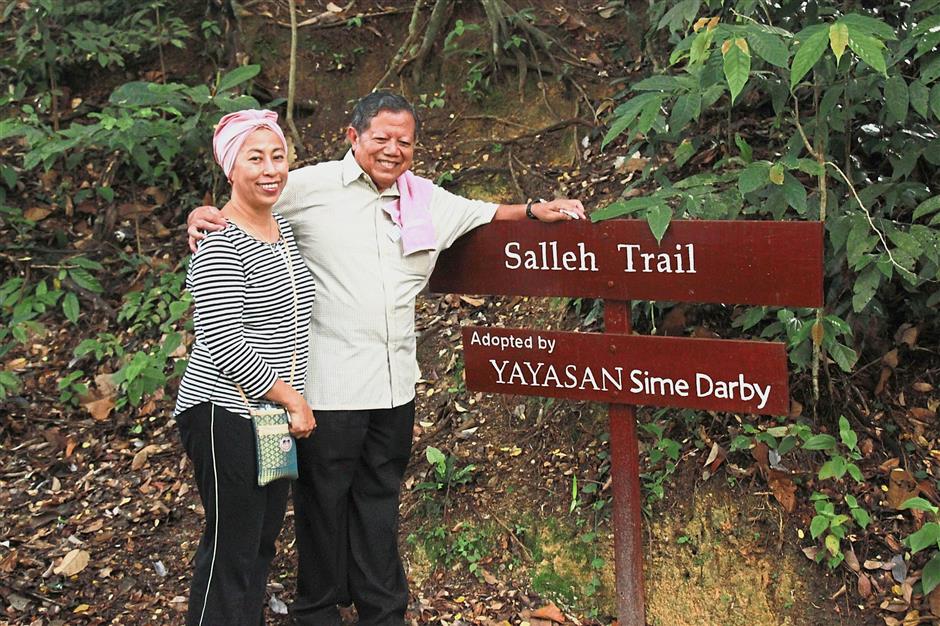 Salleh (right) and his wife Puan Sri Nor Aini Zainol Rashid at the beginning of the trail named after him for his efforts in conserving the environment.

Salleh said he believed that children were the key to the future and must be educated on the importance of green lungs.

“It is especially important for children visiting the forest reserve to understand the importance of environmental conservation.

“KDCFR was gazetted after a concerted campaign by local residents and I am proud to see the forest reserve being actively used until today,” he said.

Boasting a scenic route that circles a lake, the Salleh Trail is safe for beginner-level mountain bikers and leads to the Tahak Sipew Ethnobotanical garden, which showcases a variety of local and unique herbs.

The trail has been furnished with an area to facilitate “forest classrooms” intended for environmental education.

The Salleh Trail is one of the nine trails established by KDCF Society at the forest reserve over the past nine years. The other trails are Scouts, Temuan, Sahabat, Unity, Harmony, Unity Peak, Denai Tiga Puteri and Serenity.

In total, the society has established more than 16km of sustainable earth trails.

Under its environment pillar, YSD has committed RM138mil towards the protection of high conservation value ecosystems, vulnerable and endangered species as well as initiatives promoting the conservation of the nature.