Thumbs up for new bypass

EXCITED motorists driving through the Rawang-Serendah Bypass that was opened to traffic yesterday have described it as a beautiful and scenic stretch.

Some curious Malaysians even parked by the side of the elevated stretch to have a longer and better look at the surrounding beauty and to take photos.

The 9km bypass connecting Selayang with Serendah is surrounded by greenery as it cuts across the Selangor Heritage Park.

What makes it more unique is its 2.7km elevated stretch that is 58.2m high, said to be the highest pole structure in the country.

The entire stretch is hoped to reduce traffic congestion by half and shorten travel time during peak hours.

Previously, motorists travelling to Serendah or Kuala Lumpur would have to go through Rawang town but not anymore, thanks to the bypass which is expected to benefit about 30,000 motorists daily. Md Faizal and his children were among eager Malaysians who tested the bypass on the first day of its opening.

Sungai Buloh resident Md Faizal Baharon, 39, took the opportunity to go on a joyride with his three children to test the bypass.

“It is an exhilarating drive with towering trees on both sides. There is a gradual elevation, so it is not scary,” he said, describing the elevated stretch.

Sean Ho, 35, pointed out that more signs were needed to alert Serendah-bound motorists about the bypass.

“There is not enough distance between the first sign and the start of the road, so some motorists may end up on the bypass without meaning to.

“They would have to make a U-turn at Serendah, which is easily 6km away,” he said.

Motorist Jazz Yip, 45, was one of those eager to try out the new road.

“We have been hearing about it for some time. It will definitely be convenient when we need to get to our factory in Rawang.

“Previously, it would take almost an hour to get from Petaling Jaya to Rawang, but I read that it now takes half the time.

“The best part is there are no toll charges,” she said.

Yip added that the bypass would come in handy when visiting her mother in Selayang.

Launching the bypass on Tuesday, Works Minister Datuk Seri Fadillah Yusof said the construction of the RM628mil road began on July 16, 2005 and was completed on Nov 21 this year.

He said the project running through the Selangor Heritage Park only required about 9.7ha of land instead of 25ha if the bypass had been built without the elevated stretch. The design of the bridge was also meant to protect the rare merawan kanching or giam kanching tree species at the park.

The project was delayed for six years because of the work procedure and processes of third parties that were beyond the control of the Public Works Department (JKR).

The drive to and from Serendah and Selayang via the bypass was a breeze, bearing in mind it was the first day it was opened to traffic.

The four-lane dual-carriageway was slightly narrow and a little congested due to motorists stopping by the side to take photos of the scenery.

Heavy vehicles, however, were seen struggling up the elevated stretch of the bypass, slowing down traffic.

Rawang’s Bandar Country Homes Residents Association chairman Soong Beng Khoon said residents had to put up with bad traffic congestion for more than a decade and the elevated bypass was a solution to their traffic woes.

“It will definitely reduce traffic entering Rawang and ease congestion within the town. Journey time can be reduced by half or even more. 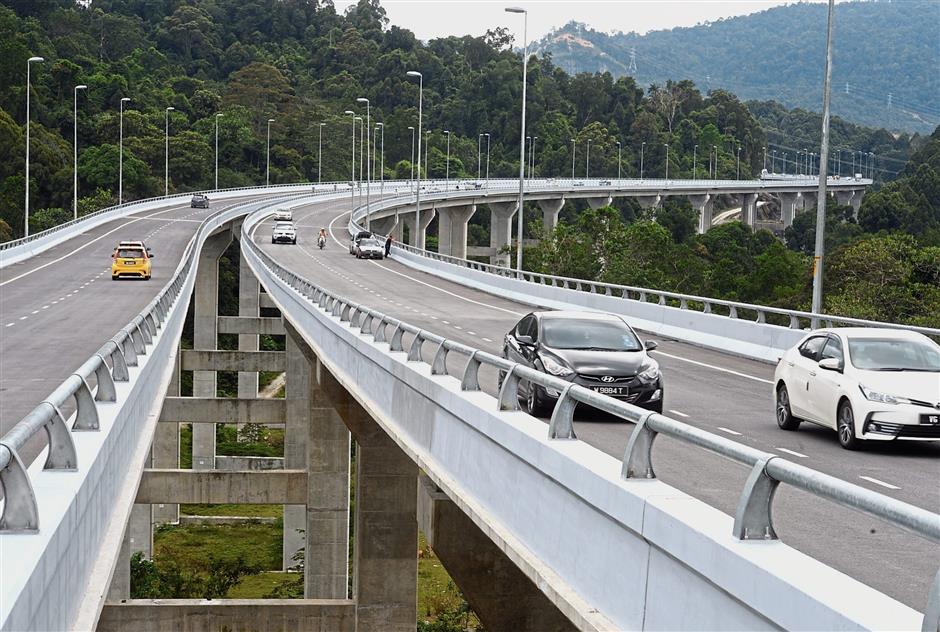 The RM628mil Rawang-Serendah Bypass is a four-lane dual-carriageway, which is expected to ease congestion in Rawang town.

“Not often motorists will get to have such a scenic view of tall trees and forest while driving. Even on a helicopter, you can’t see this as we will literally be riding through rows of trees,” he said.

“The bypass might look very tall and scary to drive on but I believe it is safe and sturdy as the free-moving traffic will not cause any strain on the structure,” he said.

Barisan Nasional coordinator for Rawang, Ryan Ng, also believes that the bypass is the answer to the problem of traffic congestion in Rawang town.

“I’m definitely pleased to see its completion after the six-year delay. Finally, we have direct access to Serendah via the bypass,” he said.

Ng, who is also Selayang MCA division secretary, said the project was initiated in 2005 as an alternative route to reduce congestion in Rawang. What makes the Rawang-Serendah Bypass unique is its 2.7km elevated stretch that is 58.2m high, which is said to be the highest pole structure in the country. — SIA HONG KIAU/The Star

“I am sure this elevated bypass, which is the highest here, was well thought through and we should have confidence in our professional architects and engineers to make it safe,” he said.

Asked how much time could be saved on the road, he said it should cut journey time by half but this is yet to be seen as it just opened.

Ng added that the bypass would also help ease congestion in Rawang, which is busy anytime of the day and not only during peak hours.

Rawang assemblyman Gan Pei Nei said the highway had to be elevated to protect the forest.

“The elevated stretch is the most significant part of the bypass as it was designed in such a way to protect the Selangor Heritage Park and the ecosystem.

Gan added that the other alternative route, apart from the bypass, to get to Sungai Choh, Batang Kali and Serendah was Jalan Ipoh, but that stretch was often congested.