The state’s medal winners made a significant contribution to the national contingent, delivering 81 medals including 23 gold to help Malaysia emerge champion in the 29th Sea Games and runner-up in the Para Games.

He also broke the games records in the 200m and 400m freestyle events.

Para athlete Mohd Adib Iqbal, despite not winning any gold medals, took home the second biggest haul for the night with RM29,000 for his feat of two silver and three bronze.

Overall, 24 Sarawak athletes contributed medals in the Kuala Lumpur Sea Games and 27 in the Para Games.

The national contingent emerged overall winners in the Sea Games with an impressive medal haul of 145 gold, 92 silver and 86 bronze medals, the most Malaysia has won in the history of the biennial competition.

Malaysia finished second in the Para Games after winning 90 gold, 85 silver and 84 bronze.

Abang Johari ushering a para athlete at the event.

The state rewarded the same amount to both able and disabled athletes with RM10,000 for a gold medal, RM7,000 for silver and RM5,000 for bronze. 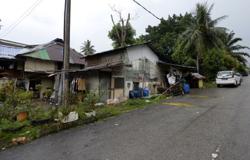