Pedestrians climbing over the railing to gain access to the pedestrian bridge in Subang Jaya.

WALKING from the MRT station to Phileo Damansara I and II can sometimes be very dangerous because of the lack of proper walkways and pedestrian crossings.

Much like almost every transit hub in Klang Valley, the paved sidewalk from the station ends prematurely without a proper crossing from the station into the business centre, causing pedestrians to halt cars and dash across the road.

Passengers alighting from a bus that stopped near a pedestrian bridge instead of a bus stop that is 400m away, in Subang Jaya.

One such example is a pedestrian crossing at the Subang entry point into New Pantai Expressway, where many pedestrians urge bus drivers to stop directly at the foot of the pedestrian bridge stairwell instead of the designated bus stop that is about 800m away.

For traffic planning consultant and MDS Consultancy Group managing director Dr Rosli Azad Khan, the answer is a definite no.

“Klang Valley is not pedestrian friendly. It is designed for motor vehicles.

“When we talk about what is pedestrian friendly, we often forget that it incorporates everyone.

“The moment you park your car and step out, you become a pedestrian.

“So, when we talk about pedestrian safety, what we are really focusing on is creating shared space for motor vehicles and pedestrians,” he said.

Dr Rosli added that shared space did not mean enabling motor vehicles to drive faster between Point A and Point B, but rather minimising conflict between pedestrians and motor vehicles, and enabling both parties to use the same road efficiently and safely.

Building a pedestrian-friendly city does not require a major overhaul.

As Canadian-based non-governmental 8-80 Cities founder Gil Penalosa pointed out, a few minor additions and changes could recreate a city to accommodate people from eight to 80 years old.

“We must stop building cities for those aged 30 and athletic only.

“Think of a child aged eight and an 80-year-old person, whether they would be safe if they crossed a crowded intersection.

“Older adults would not want to walk in the city because there aren’t enough benches along sidewalks, to enable them to rest every few blocks.

A cyclist avoids the designated lane because of the uneven road. — Photos: SAM THAM/The Star

Similarly, Rosli said there were guidelines for good road design, but those elements were only suggestions and were not enforced.

“Ideally, pedestrians must always be walking on a higher level or a slightly elevated kerb from the street level, to ensure they are not too close to passing vehicles. Pedestrian walkways should also not have too many steps as it could be a nightmare especially for the elderly and the disabled.

“Shaded pathways are important and this can either be covered walkways or canopy-like trees along the sidewalk.

“The most critical of all is to design pedestrian crossings that are suitable based on the road’s traffic flow and pedestrian usage.

A pelican crossing is when pedestrians press a button at a traffic light junction to stop traffic to enable them to cross safely, while a zebra crossing consists of black-and-white stripes painted from one side of the road to the other for pedestrians to cross. It is an offence if drivers do not give way to pedestrians on the zebra crossing.

In accordance to the Road Transport Act 1987 Section 75(5), should anyone violate any rule with regards to a pedestrian crossing, they are considered guilty of an offence and on conviction be liable to a fine not exceeding RM500.

AT 5.30pm on a Saturday evening, Petaling Jaya resident of 52 years N. James, 80, walked from his home in Section 10 to Amcorp Mall, just as he had done every other weekend for decades.

Pressing the button at one end of the pelican crossing and waiting for the traffic lights to turn red after a timed delay, he crossed Jalan Sultan only to be hit by a white sedan speeding to beat the traffic lights.

The car sped away, leaving James on the ground with a deep cut on the back of his head, cuts and bruises to his hands and legs, and a deep gash on his heel that resulted in him being warded at University Hospital for a week.

James believes that his accident could have been avoided if Petaling Jaya City Council (MBPJ) installed better infrastructure.

A car seen beating the red light at the pedestrian crossing in Jalan Timor, Petaling Jaya.

“The traffic calming measures were not enough.

“Jalan Sultan is part of the one-way loop and has multiple lanes, which motivates drivers to speed and switch lanes at the last minute.

“MBPJ needs to build a pedestrian bridge because this road connects most of the places by just a short walk,” he said.

Echoing similar thoughts, Petaling Jaya resident and performing artist Phraveen Arikiah, 27, said people would leave their cars at home and utilise public transportation only if there was better pedestrian connectivity between the train stations and bus stops.

“People are not going to walk if there are no designated lanes to do so, because it is not safe.

“For example, walking from KLCC to Pavilion Kuala Lumpur might have seemed like a ridiculous notion 15 years ago, but after the construction of proper walkways, many pedestrians use the route.

“Many of the other areas are not equipped with even properly planned sidewalks. They are just patches or strips of grass, but these are the only paths available once you exit the LRT or MRT station.

“I have faced many near-accidents because I have to walk on the same road with motorists,” said Phraveen, suggesting that council staff take the public transport to experience the problem that pedestrians faced.

Bank executive Siti Noor Aishah Samin, 32, pointed out that the placement and design of the pedestrian infrastructure sometimes did not match users’ needs.

“I cross Jalan Ipoh Batu 3, at a spot between two traffic lights, daily to get to a bus stop on the other side

A bus stop sign in Section 17, Petaling Jaya is placed right in the middle of the pathway, with no proper waiting area for passengers to wait. —filepic

“It is far away from the zebra crossing and there is no overhead bridge either. Crossing this road is risky because there are a lot of oncoming vehicles turning in from the bend and many of them are speeding,” she said.

While the onus to build better infrastructure remained in the hands of the local authority, pedestrian and IT consultant Hakim Albasrawy said pedestrians must play their role in keeping the council informed on the roads that needed immediate work.

“I considered giving up my car once the MRT began operations, but the walkways and crossings are incomplete.

“If you stop at the Bandar Utama Station, there is no pedestrian crossing and you will have to walk on the road to the other side.

“Existing roads need the bare minimum of a paved walkway that is well maintained.

“We pedestrians tend to know the roads better and how to connect to the key locations.

“That is why I think we need to participate in the conversation and more directly with the council, by informing them about unsuitable walk paths and locations in urgent need of crossings,” he said.

A solution at hand?

Last year, 511 pedestrian deaths were recorded in the country with an increase of 29 deaths from the previous year.

Proper signage and pedestrian crossing in SS15, Subang Jaya, nearby a school and university area make it easier for students.

While the common solution to curb pedestrian deaths is to have better infrastructure, local authorities struggle with providing relevant infrastructure for the sole reason of low usage.

In Subang Jaya, the completion of the Kelana Jaya LRT line with 10 new stations brought up issues of inadequate park-and-ride facilities as well as no continuity in pedestrian walkways from the station to key destinations.

Subang Jaya Municipal Council acting president Mohd Zulkarnain Che Ali explained that connecting the walkways were part of the council’s long-term plan, but it was not on the top of their list.

“We have a plan to build a pedestrian walkway loop that connects Sunway area to SS15 and Subang Parade, in Subang Jaya, that connects to the LRT stations.

“The other plan is to build connecting lanes between each LRT station for better pedestrian access, and this will be done in phases.

“But honestly, even if we build it, we are not optimistic that people will walk and use the facilities,” he said. 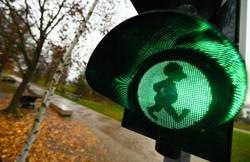