The recent graduate of Sunway University’s Psychology degree programme amazed the panel of judges with his artificial intelligence (AI) chatbot for psychological help.

“Most people who are depressed do not seek help because of the stigma and fear of being classified insane.

“Unity Therapy is an AI chatbot that ‘talks’ to people who are facing mental problems so that it is like texting a friend,” the 24-year-old said.

Yim, who worked with a partner based in Singapore, hoped it would make mental care awareness more accessible.

They came up with a motorcycle helmet visor projector which could be inserted into any existing helmet to project maps.

Third placing was shared by teams Suka Go – a platform to match volunteers to non-governmental organisations – which was represented by Muhammad Zarif Shamil Jamil and Nurul Jannah Najman and Power Waver (a self-charging power bank) by Muhammad Razlan Dhamir Hamdan.

The winners were awarded RM9,000 in cash prizes and will be accepted into the Sunway iLabs accelerator programme, which would begin in January 2018, to further develop their ideas.

The teams were among 10 teams which pitched their ideas to the judges.

Sumitra during the panel discussion at Sunway iLabs Start-It Challenge.

Besides the pitch, there was also a panel discussion by industry heavyweights on “The Role of Millennials to Drive Innovation in a Digital Era”.

Sponsor companies such as Sunway, DiGi, CIMB, Axiata Digital, Lazada, Impiro and Grab also announced the names of the candidates who tackled their challenge and would be invited for an interview for a potential internship or employment. 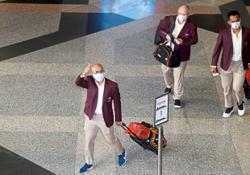