Company tests the viability of vivariums as a business

Replicating nature: Some of the plants that will be placed in a vivarium.

A PASSION for living things, especially amphibians, reptiles and plants, gave Chau Chun Seng the impetus to set up Riumz Sdn Bhd in 2011 to bring vivariums, or enclosed miniature habitats, into the homes and offices of city dwellers.

A vivarium, which literally means a “place of life” in Latin, is an area, usually enclosed, for keeping and raising animals or plants for observation, research and decoration.

“I remember my mother’s expression when I brought a toad and snakes home after a walk in the park when I was five years old,” he tells Metrobiz.

Fascinated by animals even at that young age, he had to find creative ways to keep the frogs and snakes secretly because he wasn’t allowed to have pets. As a result, he resorted to keeping small creatures inside jars and putting in a few tree branches and leaves to simulate a natural environment. And when the animals did not eat, he had to quickly release them back into the wild.

He says he realises now that he was lucky then as he could have ended up messing with venomous snakes without knowing it.

Of course, that lack of knowledge is now long a thing of the past. In fact, his passion and knowledge grew to the extent that it became the basis for him to set up two businesses built around plants and animals. The first, Reptilasia Sdn Bhd, was set up in 2007, at a time the Internet and e-commerce were starting to take off in Malaysia. With the help of the Internet, Chau was able to learn about the animals that fascinated him and their habitats. He decided to start Reptilasia to supply animals listed as “tradable” under Appendix II of the Convention on International Trade in Endangered Species of Wild Fauna and Flora (CITES) to licensed importers who then sold them to pet shops in countries like Canada, the US, Turkey, Japan and Europe.

Chau, a certified accountant, had left his job in the competitive world of auditing with one of the Big Four auditing companies to start Reptilasia. He used RM5,000 to set up the website www.reptilesmalaysia.com and purchase equipment to keep the animals.

His work now involved going to places like Cameron Highlands to obtain animals. In 2008, he expanded Reptilasia’s company’s services to include what he calls brokerage work to supply birds, mammals and also some consultancy for public parks.

The brokerage work involved handling requests for animals, supplying them, and then obtaining the necessary approvals from veterinary, wildlife and customs authorities to export them.

The company also advised on husbandry matters such as dietary requirements and how to breed amphibians and reptiles.

“We provided things like frogs, king cobras and small crocodiles, in accordance with CITES. To do this I also employed part-time employees with zoological knowledge to assist me,” he says.

The work involved having to check animals for injuries, ticks and parasites, which would then be treated before shipment.

“We acquired some of these animals from pet shops that had extras. But we weren’t proud of it as some of these frogs and snakes died during transit or while in our care. The tragic loss of the animals aside, it is also bad for business,” he says.

The unwanted loss of animals in fact became the motivation for changing directions and setting up to Riumz to make vivariums.

Chau still does some brokering for supplying animals as and when the requests come. 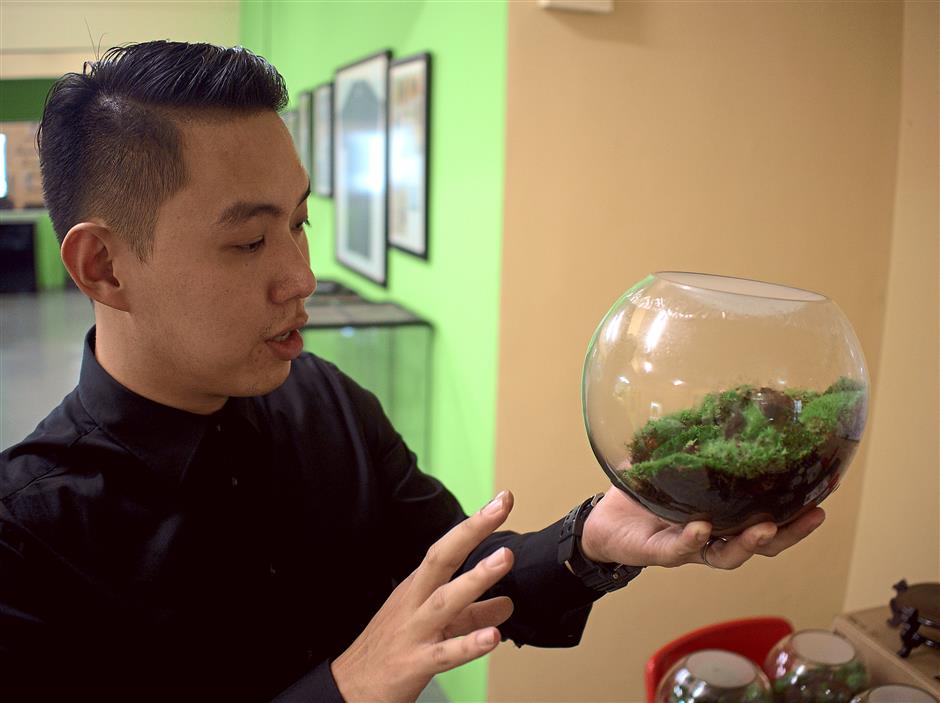 Nature in miniature: Chau showing an example a small vivarium.

Prior to launching Riumz, he built many prototype to find out what types of plants were suitable for being housed in a vivarium, taking into consideration the design, growth medium, humidity, sunlight and other factors.

He says he only began to actively market the company and its services last year after becoming confident in its ability to create vivariums. On average, the company presently handles two major projects for clients every month.

Today, the company operates in a 2,400sq ft rented office in Ara Damansara with a staff of five.

Their products range from vivariums in simple glass bowls costing RM180 to larger complex designs that can cost tens of thousands of ringgit.

The company uses a distributor to market the simpler designs in major shopping malls, while the more complex vivariums are built after in-depth discussions with clients, which range from government agencies, businesses to ordinary individuals.

“We can put in over 20 species of plants, from moss to scrubs and orchids, in larger examples that take a few weeks to build,” he says.

Most of the plants for the vivariums are purchased from nurseries and the company then installs the equipment, including LED lighting and misters, to simulate a natural environment within the vivarium.

“The equipment makes up the largest portion of the overall cost, particularly custom made glass containers and cabinets,” he said. Less activity: An area for housing animals is less utilised these days as Chau focuses more on growing the vivarium business rather than the export of animals to licensed importers.

For clients who want to include animals in their vivariums, Chau recommends frogs as they can come in bright colours and take well to the environment in vivariums.

Otherwise, he says the vivariums are fascinating on their own with just plants.

As the company expands, he says he will be hiring more creative people, particularly artists with a keen eye for bringing nature into people’s spaces, and also specialists in life sciences.