Chef trades in apron for T-shirts

Long hours: Liew on duty at one of the night market stalls in Cheras.

The approval of a credit card with a RM10,000 credit limit became the catalyst for Liew Ken Seng to start his own business selling rock tee-shirts, caps, belt buckles and wallets.

“Instead of buying a car or chalking up a huge shopping bill, I used it as start up for Ah Soon Acessories Enterprise(ASA),” said the 36-year-old Sino-Kadazan who has been running the enterprise for eight years.

Liew, who operates six days a week at night markets in the Cheras area also has two shoplots in Taman Connought.

The idea to go into business came in 2006 when, Liew, then working as a sous chef in Legend Hotel in Jalan Putra, decided to take a stroll down Jalan Chow Kit after work. There, a display of flashy belt buckles at Plaza GM caught his eye.

“I was always a wild child,” he confessed.

A motorcycle enthusiast, Liew liked nothing better than to embellish his two-wheeled iron horses with decorative elements like belt buckles. Upon discovering how reasonable the wholesale prices were, an idea struck him to start a business in the very items that had caught his eye. 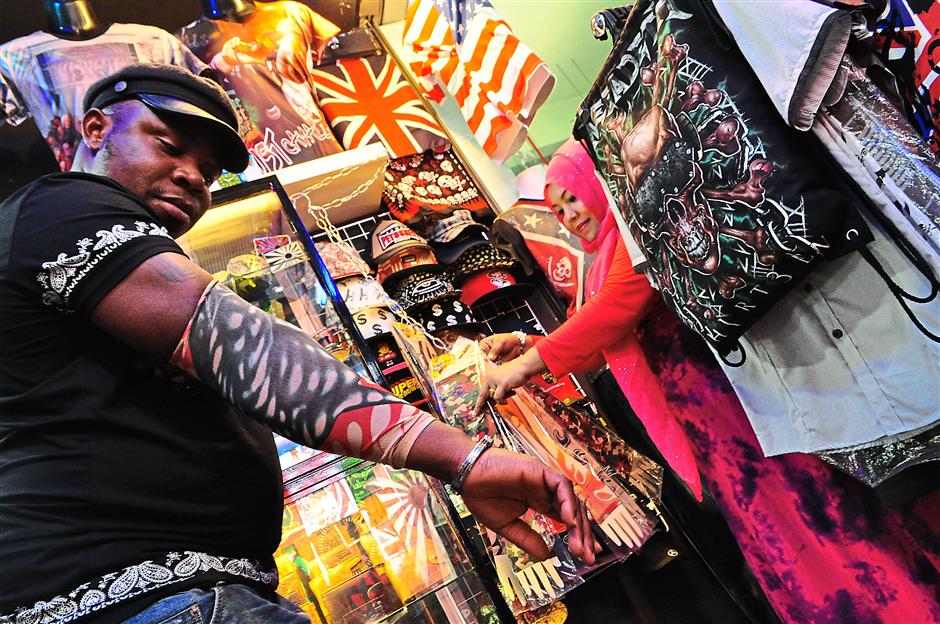 “So, I picked 50 designs, paid RM300 for the lot and went to the night markets to survey price points.

“This came from my childhood experience from watching my grandmother sell vegetables at the market,” Liew says.

From belt buckles, he eventually progressed to selling rock-themed T-shirts in 2010, sourced at first from Thailand but eventually found a local wholesale supplier who could provide him a wider choice of designs at the same time freeing him from having to tie up capital in large amounts of stock.

The early days saw Liew packing his entire inventory, plus table stand and wooden boards, behind his Yamaha Virago motorcycle. It also saw him taking the rebel approach of operating without a permit for the first few months.

“The unwritten rule between night market traders is for a newbie to ask his neighbours for permission before setting up shop. I saw an empty spot at a night market along Jalan Cheras, and after verifying with my neighbours I would not be their direct competitor, I started. On the first day, I made RM100, which I thought was not bad,” Liew reacalls. 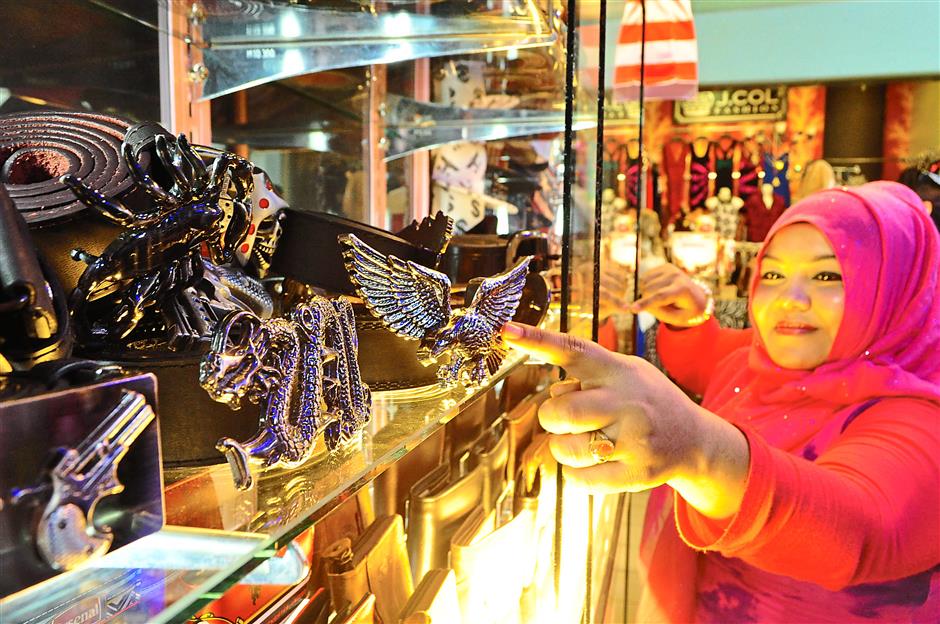 Growing business :Liew's assistant shows off some of the premium buckles in his collection at his shop in Taman Connought, Cheras.

Having started life as a kitchen helper with a catering company in Brunei at age 14, trading in night markets was supposed to be just a moonlighting venture until the credit companies and banks started calling.

“Between 2006 and 2007, credit companies seemed to be ever ready with approvals. I was earning RM3,000 a month, a princely sum for a bachelor in those days. That might have been one factor why they approached me so often.

“When I asked how they obtained my personal particulars, the agents who called revealed they got my name from my friends but declined to reveal who they were. Rather than ponder over what would be regarded as an invasion of privacy, I took it as an opportunity to expand. My loan applications for was RM10,000, then RM4,000, followed by RM6,000, were all approved,” Liew says.

With RM20,000 in hand, Liew decided to obtain a bigger mode of transport for his business.

“I got a PeroduaViva,” said Liew.

Having made do with transporting his goods by motorbike for the first few months, Liew soon gained a reputation among colleagues in night markets around Cheras for the ability to transform his Viva into a tiny van.

“I could stuff inventory to fill three night market lots into my Viva. That was how good I was at packing,” Liew says with a smile.

“The price of lots differs by location. In Cheras Perdana for example, the rent for one 2.4m by 2.4m lot was supposed to be no more than RM200 to RM300 but because I chose to sit in a nice place, I paid RM1,800 for two lots. In my books, it is always worthwhile to invest on choice spots. This explains why I can make up to RM600 in daily sales, provided the weather permits,” said Liew.

However, as with all businesses, globalisation is bringing traders new competition. hard work: Examples of the caps the company sells. Liew says the company has grown because he works all the time.

According to Liew, citing Mahkota Cheras as an example, the night markets of today are hosting too many traders. Though it offers consumer the advantage of choice, revenue from sales is spread too thin.

Another bone of contention is the presence of immigrants who have opened up shop without permits.

“Though I myself went without a permit in the beginning, it was only for a few months. These illegal immigrants, I notice, have been around for over a year. They are also spoiling the market by lowering prices. Can you imagine selling an item for RM15 when the cost price is already RM12?” Liew says incredulously.

Such factors, together with a slew of challenges in 2008 almost had Liew calling it quits.

“For some reason, it rained non-stop in the evenings that year. As you must realise by now, the night market crowd is very sensitive to weather. At one point during that year, my earnings per night dwindled to RM100, insufficient to cover my loan repayments. After three months, my stock dwindled to near zero. I was near bankruptcy,” Liew says.

What followed suit was a desperate search for solutions which led him to discover how strong the camaraderie is among night market traders.

During this trying year, Liew found a spot in the Masjid India night market — a much coveted spot among nigh market traders especially during the Ramadan season.

“Someone introduced us to a man called Pak Yub, the person who called the shots with regards to lot allocation in Masjid India. When we went to him, he told us the rate per lot would cost RM3,000 and since it was Ramadan, all the lots were already full,” recalled Liew who only had RM300 in his pocket then.

However, Liew took this Pak Yub aside, explained his predicament and promised he’d settle all dues within a week.

To Liew’s delight, he was given the all clear to start the very next day.

“I felt a great burden had been lifted off my shoulders. True enough, by the end of the first day, we made RM3,000. That went to replenishing my stock. By the fourth day, I made good on my promise to Pak Yub. By the end of the month, I managed to settle my loan repayments,” said Liew.

Today, Liew’s business has stabilised and he now occupies three lots in night markets around Cheras.

“At any one time, there is always RM1,000 in my wallet. The rest of my life’s possessions are all in my stock,” said Liew when asked how much ASA makes in sales every year.

As to how he has held on despite the tough conditions, he says there is one simple formula.

But the Sabahan has dreams to retire.

“One day, I hope to save up enough to move my business back to Kota Kinabalu where I can be close to my family,” he says.