WITH startups on the rise, many young entrepreneurs now have the freedom to define their own leadership style and to chart a culture that will attract the right talent to join them towards their vision.

This requires a leader to be authentic, open, transparent, and more importantly, have the ability to address differences through mutual respect. And respect can be earned through empathy.

In a highly uncertain and stressful environment, this also means that many leaders are faced with tough decisions every day. But we weren’t taught how to deal with conflict or be better communicators in school.

When I was running my startup in Silicon Valley, I read the book Difficult Conversations, by Douglas Stone, Sheila Heen and Bruce Patton, which has been tremendously useful.

As I reflected on the book, I realised the one thing that ultimately matters and determines our happiness is our relationship with others in both professional and personal life.

Unfortunately, most of the time, people don’t talk about the thigs that matters most. We either avoid confrontation or we tend to argue, blame, and hurt each other. 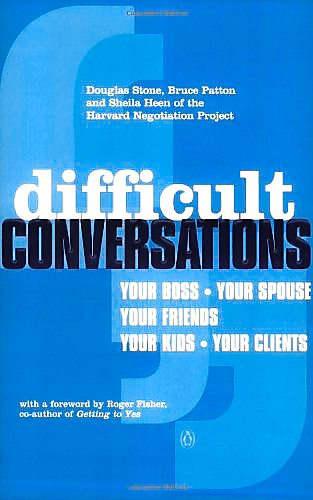 Important lesson: The cover of the book Difficult Conversations, by Douglas Stone, Sheila Heen and Bruce Patton. One of the lessons in the book is that everyone has different versions of the same story coloured by their experiences.


And then we don’t end up talking about our feelings and the underlying issues that caused it. When the roots of conflict are not resolved, it lingers and ultimately damages relationships. It takes so much to build trust and respect, but only one misstep to destroy it.

One of the best lessons learned from the book is that everyone has different versions of the same story that’s colored by their past experiences, leading them to interpret the situation through that lens. But both versions could be true.

The best path to resolving differences is to be open enough to learn about the other person’s version and what lies underneath those reactions. Starting from a point of mutual understanding rather than going down a path of blame is already an improvement.

When we argue, we inhibit the opportunity to understand the other person’s worldview and make conclusions about their intentions and character. We compel them to change. Unfortunately, telling someone to change actually makes it less likely that they will. This is because people almost never change without first feeling understood.

For example, I once dealt with an employee who kept missing deadlines even with constant reminders. And when I brought it up, she got annoyed. I could have assumed that she was irresponsible or underperforming.

But when I shifted my purpose from trying to change her behaviour to trying first to understand her, then to be understood by her, the situation improved dramatically.

In the end, she described how stressed and overworked she was. In her mind, she had put a lot of effort into her work, and felt that I didn’t really appreciate it. In fact, I actually didn’t because I felt that she was not prioritising her tasks correctly.

On my end, I explained that I had to do extra work when she was late, and I explained that in great detail. She felt badly about it and it was clear she didn’t think about it from my perspective. Her performance changed for the better from that point onwards.

To get anywhere in a disagreement, we need to understand the other person’s story and refrain from blaming or shaming them. We should also think about how we may have contributed to the situation. Then focus should be how to solve the root causes of the problem and prevent it from happening again.

Another good example is the co-founders chat.

These difficult conversations are especially crucial in the beginning. People often avoid deep conversations about values and aspirations for fear they won’t match. If mutual expectations are not established from the beginning, issues are bound to pop up when the startup is either doing really well or really badly, which can escalate into explosive conversations.

More than 20% of startups fail because of cofounder or team issues that have been suppressed for too long. Don’t suppress nagging doubts and don’t work with people you dislike. It’s much easier to fix problems earlier in the company than later.

People are the most important ingredient in a startup, so never compromise there.

The ability to bring up difficult conversations is an important skill that I believe everyone should work on. As entrepreneurs who push boundaries for change and positive impacts in our community, our tasks are more complex and our environment harsh. Conflict is bound to happen.

Unfortunately, in the worlds of both business and personal relationships, too often we deal in blame when our real goals should be understanding and change.

As with any misunderstanding, someone has to bridge gaps, and the first step is to move from certainty to curiosity. Instead of thinking “How can they be so irrational?”, try changing to “I wonder why they’re acting this way?” and take the brave step in starting difficult conversations up front.

“Be kind, for everyone you meet is fighting a hard battle,” ~ Ian Maclaren.

¦ Cheryl Yeoh is the CEO of MaGIC, the Malaysian Global Innovation & Creativity Centre.