The company’s Rero kit encourages children to experiment with the basics of robotics.

Robots — whether we like them or not — are here to stay and it is only a matter of time before we see something resembling sci-fi characters like R2D2 and C3PO in real life.

Although robots have long been used in areas such as manufacturing, military operations and space science, a whole host of robotic innovations could be running many aspects of our lives within a few years.

The fact that giant Internet-related services and products company Google bought eight robotics companies over the a span of two months last year illustrates the interest robotics is drawing.

Names like BigDog, Cheetah, WildCat and Atlas have joined Google’s growing robot menagerie and most recently, it acquired Boston Dynamics, an engineering company that has designed mobile research robots for the Pentagon.

Although Google has remained mum about their recent acquisition, it is safe to assume that the next wave of robotics outside of structured environments is here. Learning to live with it is key.

Enter Cytron Technologies Sdn Bhd, a local company based in Penang that manufactures parts and components used to build or assemble robots. The future: Phang says the next big wave in technology will be robotics.

Established 10 years ago, the company is looking to kickstart an interest in robotics among young Malaysians.

Founded by a group of tech geeks who grew up watching Transformers, the company has gone from strength-to-strength over the last decade.

Cytron Tech was born in a dorm room in Universiti Teknologi Malaysia (UTM), where the founders were pursuing a degree in mechatronics and mechanical engineering.

“It started with the Robocon Malaysia event in 2004. As we were studying robotics, it was important for us to participate in that competition to benchmark ourselves against others in the scene. We did not expect to win but we did,” said Phang Chin Yee, one of Cytron Tech’s founders. Starting them young: The company’s kits help children learn about robotics through play.

“Throughout that competition, we realised that many teams had trouble getting parts and components for their robots. That sparked a business idea,” he added.

The company has also developed a series of robotic training kits and development boards for university projects, robotic labs and even robotic competitions. By the end of 2006, Cytron Tech had successfully supplied robot components to almost every institution of higher learning in Malaysia.

The same year, Cytron Tech attracted a new investor. With fresh funding the team was able to develop more advanced robot controllers and parts used by researchers, engineers and students to accomplish their robotic projects.

“As we were building the company, we were also invited to give talks in secondary schools. That was an eye-opening experience for us. We realised that all these students did not understand robotics, nor did they have a platform to fully experience it,” said Phang.

“We wanted to change that. We want young Malaysians to be familiar with robots. Starting in varsity is too late. We need to get them interested when they are young” he added. 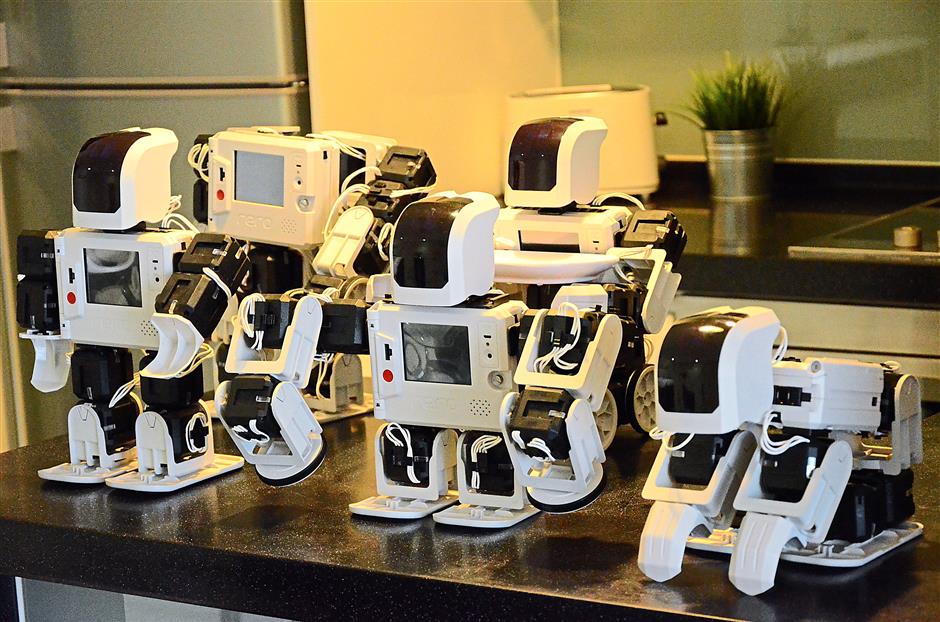 Targeted at children aged 10 to 17, the kit enables them to assemble and disassemble parts of the robot based on their own imagination and also programme desired movements.

“Beginners are able to utilise a teaching mode using a touch-screen device provided in order to gain familiarity with the components and pick up the basics of programming,” Yess explained.

“Rero users will be able to move on to advanced programming once they have mastered the basics,” he added.

With a starting price of RM1,500, Phang hopes that Rero will become an essential learning tool for all Malaysian students in primary school.

Rero kits will soon be available in the outlets of electronics retailer Radioshack in Malaysia. Cytron Tech also has a five-year plan to ensure Rero’s success.

“Markets such as Singapore are very attractive to us. We took four samples to Singapore before our official launch and they were all taken up,” said Phang.

The company is also moving to a bigger plant as the demand for their products look promising.

The global demand for all things robotics is on the rise. According to the International Federation of Robotics, robot sales increased by 12% to 178,132 units, by far the highest level ever recorded for one year, in 2013.

“Robotics is the next technological wave. We had the personal computer boom before mobile devices came along. Next will be robotics and it would be great if it was included in our education syllabus,” said Phang.