A lot goes into planning a city: According to Norliza, a township or city, which could take two to five years of planning, could incur fees of up to RM4mil.

Entrepreneurship isn’t necessarily just limited to having a business idea, some capital and then starting out on one’s own.

It can grow from an interest in something while being an employee of a company, and subsequently having enough confidence to create a business unit within the company.

That was how AJM Planning and Urban Design Group Sdn Bhd (APUDG) managing director Norliza Hashim set up the consultancy. Her knowledge and passion earned the trust of her bosses in Akitek Jururancang (Malaysia) Sdn Bhd (AJM) to create the town planning unit.

Norliza said APUDG, which was incorporated in 1993, was not active until 1995, when AJM began to seriously look at establishing centres of expertise in fields such as interior design and town planning.

“I had already been offered another job with a public-listed developer, but I chose to stay with AJM because there was so much more I could do here,” she tells MetroBiz. Human capital vital: APUDG’s experts going through the various elements that make a township, from the housing to the water supply and sewage systems involved.


Her passion for town planning made her the right candidate to set up APUDG, which she said was an uphill task at the beginning.

With a loan of RM80,000 from the parent company to cover operating costs for the first six months, Norliza and her team of five started bringing in clients ranging from private property developers to government agencies and local councils who trusted in their ability to deliver.

“As a service-based sector, the human touch is vital. Clients recognise you and follow you as long as you are able to deliver,” she said.

Having done planning for projects ranging from a one acre site to a 16,000 acre township, she said fees charged vary according to the complexity and time needed to accomplish the project.

According to Norliza, the fee for the straightforward planning of a residential project on a one acre site taking about three to six months to complete is around RM35,000. A township or city, which could take two to five years of planning, could incur fees of up to RM4mil.

“Even then, we have to use part of the fees to pay some of the specialist consultants — from engineers to sociologists — involved with the project. Our biggest cost is human capital,” she said.

This, she said is due to the complexity of the work, which involves looking into the social and economic aspects of the city planning. Physical aspects, such as housing and public infrastructure, from water supply to sewerage, become vital.

“We have to look at how various communities, from the small traders to multinational companies can benefit from the way a city or township is laid out for things like financial districts, urban transportation, greenery and conserving the heritage of the site,” she says.

The company, which has since grown from a rented 1,000 sq ft shop lot in Kampung Attap, Kuala Lumpur, to a 10,000 sq ft five storey building in 8 Suria, Petaling Jaya with a staff of 35, comprising architects, environmentalists, quantity surveyors and other specialists.

The company now has clients in China, India, Russia, Indonesia and the Middle East. 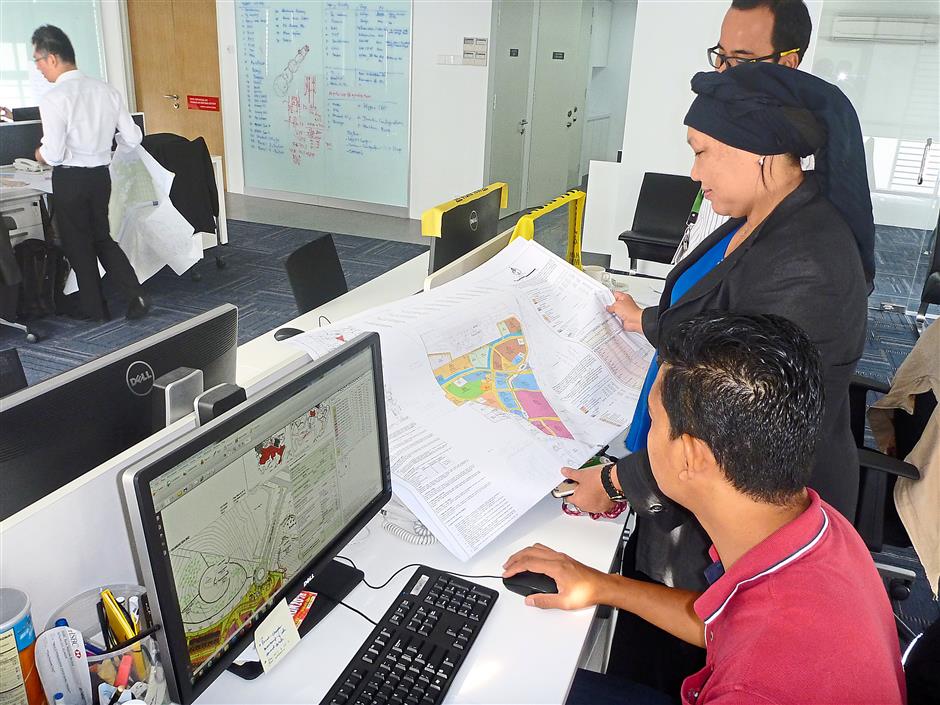 Hands-on boss: Norliza (in black) going through the plans with her staff.


Norliza says a wide range of expertise is vital as every project is different.

“There are no projects that we can repeat directly from our past. Every location has different challenges due to its land characteristics,” she said.

Another challenge that her team needs to address is social needs.

The well-being of people is an important element is housing she said. This involves looking at who the buyers are and their income levels.

“We try to plan a town with a diversity of economic means so that low-income earners have access to planning elements, which would include public transport and job centres,” she said.

Norliza, who had the opportunity to experience life in Kota Kinabalu, Sabah when she was in primary school, says there is a need to balance simple living with economic activities and security issues in town planning.

“All these elements have to be observed and experienced. They are not taught in universities,” she said. 
With environmental awareness growing, she says her team needs to keep themselves up to date with the developments in low-carbon township planning as well.

Knowledge aside, her work requires diplomacy when it comes to pushing for better townships.

Norliza, who was secretary general of the Eastern Regional Organisation for Planning and Human Settlement from 2011 to 2013, and president of the Malaysian Institute of Planners from 2005 to 2011, added that outreach programmes to spread the message on the importance of having sustainable communities is vital.

She says that, in urban planning, it is not always about the bottomline, but rather, about seeing a town come to life.

One of the things that she passionately advocates is the keeping of low-cost homes within Kuala Lumpur. She says people need to think about how this demographic group can help to serve businesses in the city.

She also believes traditional villages should be retained within a city so that the people in the villages get to enjoy modern infrastructure. In return, cities retain an element of their history.

“We also do not want to keep them in a museum. We might not get everything we want to implement as it involves various stakeholders who have different viewpoints. But something is better than nothing, and there’s much more to achieve when we are able to change their viewpoints,” she says.