New look: (Left) The facade of the renovated PCCC building in Penang Street.

THE Penang Chinese Chamber of Commerce (PCCC) has moved back to its original building at 3, Penang Street in George Town after 32 years.

PCCC president Datuk Seri Choot Ewe Seng said they spent about RM7mil to renovate the building about two years ago.

“The renovation is in the final stages, and will be ready in a couple of months.

“Seven shop houses have been leased out to various businesses, which include food and beverage enterprises.

“Twelve rooms have also been rented out to a hotel operator,” he said.

The PCCC, which has a 112-year-old history in Penang, shifted to the Penang Chinese Town Hall (PCTH) in 1983.

Choot said the newly renovated building would also house the PCCC headquarters and the secretariat office, but they were also maintaining their rented premises for now. 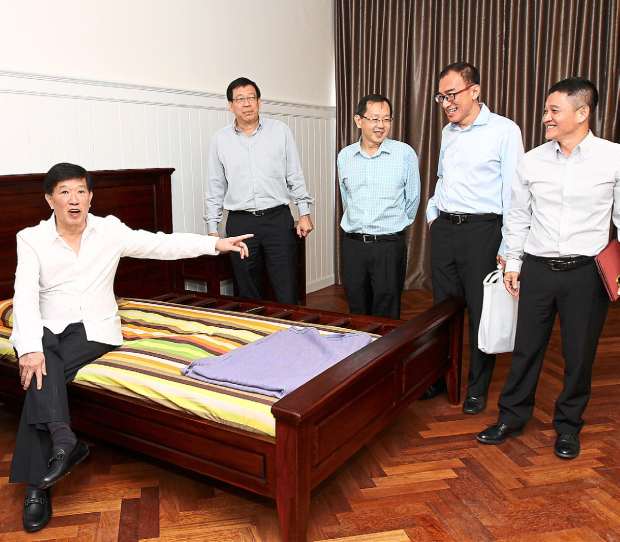 Tan, Choot, PCCC vice-president Tan Hiang Joo, Loh and Choong inspecting one of the rooms in the PCCC building that has been renovated for rent to a hotel operator.

He spoke to the press after chairing PCCC’s first meeting at the building’s Tan Kok Ping Hall.

Meanwhile, Choong said the PCCC had formed a Property Development, Construction & Management Committee (PDCMC) to tackle the problems faced by businessmen who were involved in property construction and utilised properties to generate an income.

“Besides developers, this involves a broad range of professionals and businessmen who have to use properties to provide crucial services for the people, covering engineers, accountants, bankers, lawyers, agents, and hotel operators,” he said.

Choong, who heads the PDCMC, said the budget hotel operators frequently faced problems such as the requirement of having two staircases in their premises which were already facing space constraints.

“This is a requirement by the local authorities.

“What we can do to assist these hotel operators is to appeal to the local authorities to give them the flexibility of using alternative staircases such as cat or net ladders, which are commonly used overseas,” Choong said.