Liverpool fans celebrating after Divock Origi nettedthe second goal past Hugo Lloris in the second half of the match.

FOOTBALL fans from around the world converged in Madrid, Spain, early this month – some without tickets – for the UEFA Champions League final between English clubs Liverpool FC and Tottenham Hotspur FC.

These fans, mostly of the two English clubs, were hoping for the impossible – to get tickets for the big match at the Wanda Metropolitano Stadium in northeast Madrid.

But a majority ended up watching the game at the many fan zones in the city, including the UEFA Champions Festival in Puerta del Sol, Plaza Mayor, Plaza del Callao and Plaza de Oriente.

“If we don’t get tickets, it is ok. The trophy is coming home. We are going for the celebrations as Liverpool will be crowned Kings of Europe for the sixth time,” said a confident Dean Harris from Sydney, Australia, who was with his two sons when I met them in Doha before boarding for our connecting flight to Madrid. (From left) Wong, Cheow, Pang, Lam and Jasmesh pose just before the game between Liverpool and Spurs at the Wanda Metropolitano Stadium in Madrid. — Photos: Frederick Fernandez/The Star and courtesy of Heineken NV

Five lucky Malaysians, however, did not have to worry about tickets as they were the winners of the “Experience Unmissable Moments with Heineken” contest held in April. 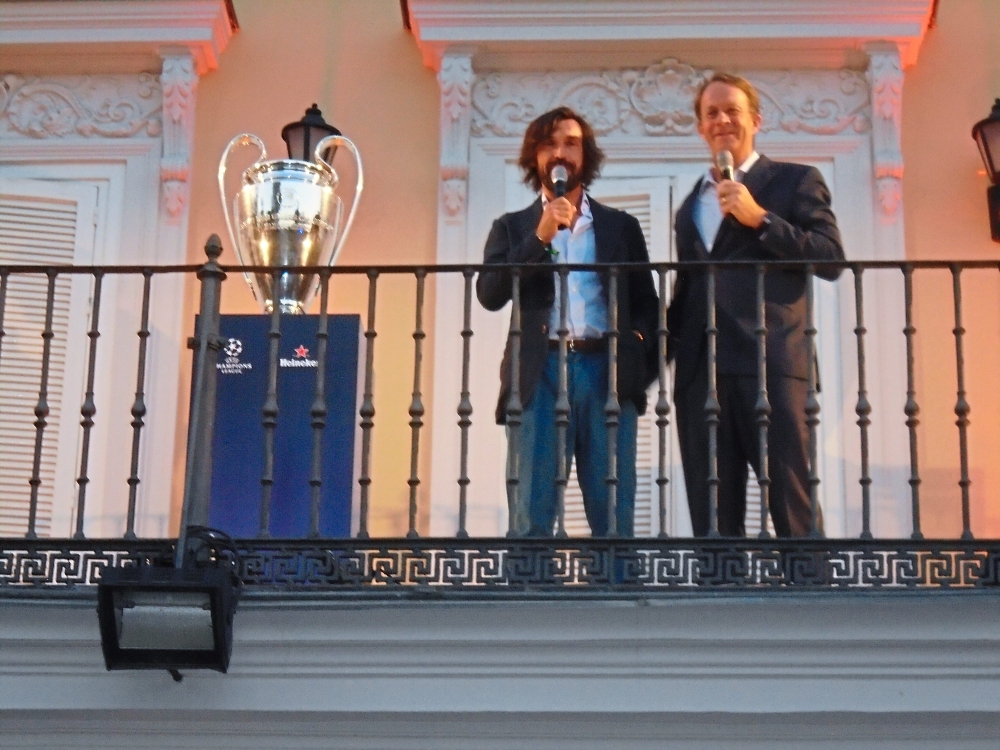 Van Karnebeek (right) and Pirlo unveiling the trophy during the welcome party.

We stayed at the centrally located Novotel Madrid Centre, in an area unsurprisingly surrounded by plenty of Reds fans, as it was close to Liverpool’s fan zone in Felipe II in the Goya township.

There were so many of them singing You Never Walk Alone and Allez, Allez, Allez at every walkway and pub, that it was hard for this Manchester United fan to endure; it felt like I had walked into a lion’s den!

Meanwhile, the Spurs supporters converged at Plaza de Colon, located between Recoletos and Calle Serrano at the other end of the city.

Chong said the five winners were among 1,100 Heineken NV contest winners and guests from around world who were in Madrid to watch the final and join in the pre- and post-match Heineken revelry.

“It is an exciting outing for them as this is the first time Malaysian winners are getting to watch the UEFA Champions League final live at the stadium,” said Chong.

Parties before the game

The first of three parties was held at the Palacio de Los Duques de Pastrana, a day before the big match. Naturally, food and booze flowed freely through the night.

We dined on food such as paella, tapas and pizza alongside an endless supply of Heineken, whisky and wine.

We were also treated to several performances, including a flamenco dance which truly captured the guests’ attention. 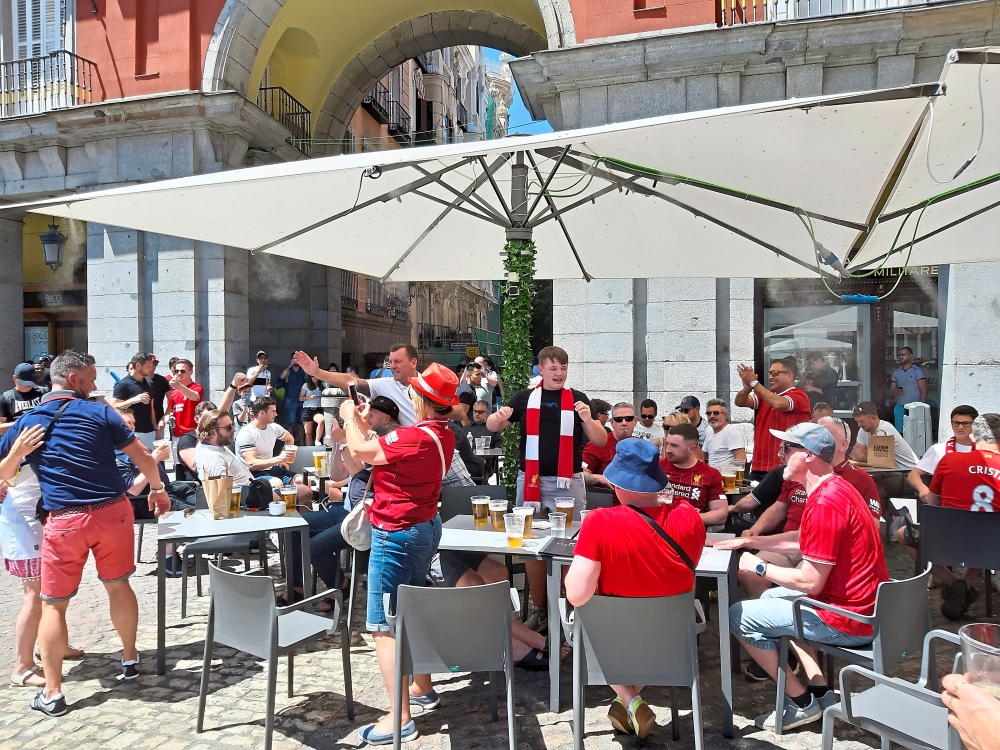 A lively bunch of Liverpool fans warming up before the match against Spurs in Madrid.

We met Heineken Malaysia managing director Roland Bala, other senior company management and contest winners from around the world at this party.

Roland congratulated the Malay-sian winners and said they were indeed a lucky lot as many in Madrid at the time were without tickets.

Battle of the fans

Wong, Cheow, Jasmesh, Pang and Lam not only had a memorable experience watching the match, but also got to experience the antics of the rival English fans in Madrid, especially those supporting Liverpool as they literally painted the town red before and after the match.

Being big-time Liverpool fans, Wong and Loh were understandably excited to see the Reds conquer Madrid around the city and stadium.

We began our match day adven-ture with an exclusive tour of the Reina Sofia Museum, which boasts one of the world’s finest art collec-tions, including Picasso’s iconic “Guernica”.

We then headed to Puerta del Sol to check out the Champions Festival, which was abuzz with activities and games such as caged football.

A popular booth here was the UEFA souvenir store selling official merchandise for the final, including T-shirts, caps and mufflers. 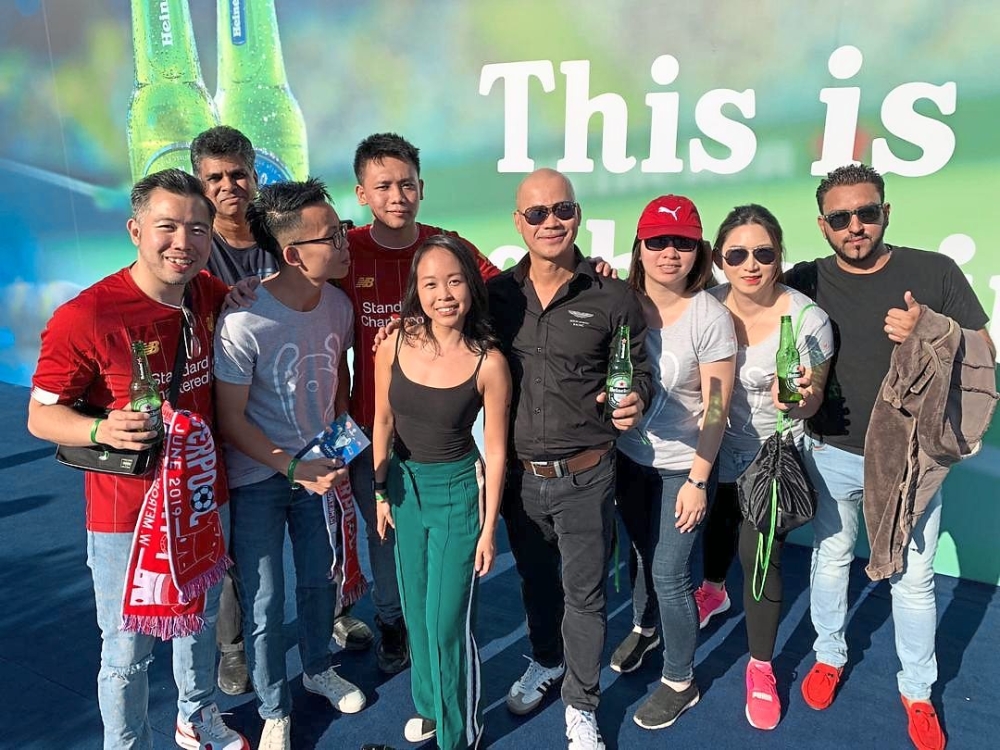 The group with Roland (fourth from right), Chong (fifth from right), Loh (left) and Fernandez (second from left) at the Heineken Hospitality Village.

“It was exciting to see football fans from around the world gathered at the squares around Madrid to chant and sing the anthems of their football club,” said Lam, whose husband is a Liverpool fan.

The mother of two said the trip was more than an adventure for her as she managed to make friends with other fans from South Korea, Singapore and Spain.

For Wong, 26, the feeling of watching Liverpool become the champions of Europe was euphoric.

Before the kick-off, fans were treated to a high-octane performance by Imagine Dragons, the band behind hits such as Believer and Radioactive.

“The performances by the band before the match was outstanding; I also enjoyed the well-choreographed dances,” said Pang, 34, from Johor Baru.

“With Liverpool having a larger number of supporters at the stadium, we managed to drown the voices of the Spurs fans and that gave us a great start,” said Wong, a former fan of arch-rivals Man United until just a few seasons ago.

Great view of the game

Loh said the seating arrangement at the stadium – directly opposite the grandstand – could not have been better.

“It is a beautiful stadium and the atmosphere was awesome because we were very close to the pitch. Despite the noise from the fans, we could hear the players communicating with one another on our side of the field,” said Loh, who is from Kuala Lumpur.

For Man United fan Jasmesh of Taman OUG in Kuala Lumpur, it was hard to watch his team’s bitter rivals win the championship, but lauded Liverpool’s cap of an outstanding season in the EPL. 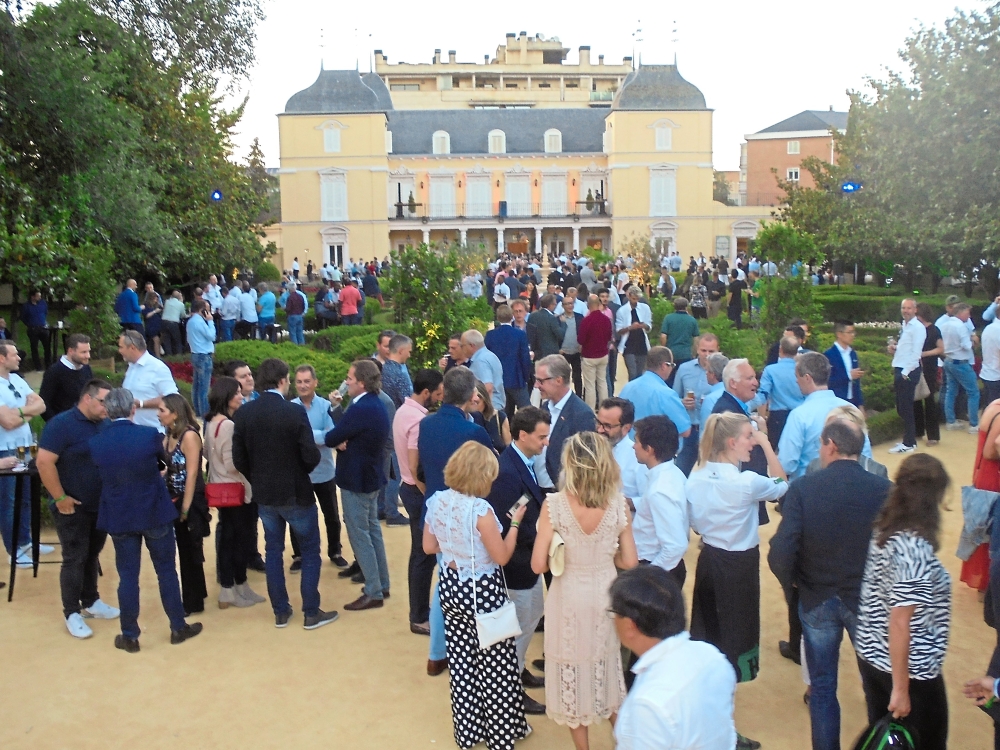 Guests enjoying themselves at the Heineken party at Palacio de Los Duques de Pastrana a day before the game.

He said other than getting to watch the game live, he thoroughly enjoyed the numerous parties hosted by Heineken.

“We celebrated before the game and celebrated again after the match. Thanks to Heineken, we had plenty to eat and drink,” added Jasmesh, who is self-employed.

Pang, a mother to a two-year-old girl, considered herself lucky to

make the trip to Madrid for the match.

“The atmosphere was unbelievable as we saw how excited the fans were not only in the stadium, but also around the city,” she said.

Cheow, who is also from Johor Baru, thanked Heineken for doing a good job taking care of the contest winners and guests.

“I must say that we were well taken care of and well fed. We had plenty of tasty Spanish food and Heineken beer during our stay in Madrid. Hats off to the Heineken staff who were friendly and helpful attending to our needs,” said Cheong. The Spurs supporters were stunned after the referee awarded a penalty to Liverpool in the first minute of the UEFA Champions League final.

Hours before the match, we were ushered to the Heineken Hospitality facility in the Champions Village adjacent to Wanda Metropolitano for more drinks and an array of Spanish and Mediterranean cuisine.

It was truly an amazing and unmissable experience to be given the opportunity to watch the highly-anticipated final, and savour the wonderful moments during the parties hosted by Heineken NV in Madrid.

There was not much time for siesta during the five days as we were all immersed in the exceptional fiesta atmosphere Madrid had to offer.

The writer’s trip to Madrid to watch the UEFA Champions League final was sponsored by Heineken Malaysia Bhd.

Green Line convenience to get around Madrid