Recognition no illusion to magician

WHEN Iranian illusionist Mahdi Moudini began entertaining friends with his magic tricks, he did not think his name would one day be associated with US greats such as David Copperfield.

Recently, Moudini was named a Merlin Award winner -- the eighth he has won in a row since 2012.

The award is to magic what the Oscar is to movies or the Emmy to television.

However, the latest award is an especially significant one for Moudini. It is the Merlin for “Hollywood Star Illusionist 2019” – the last of which went to Copperfield 20 years ago. 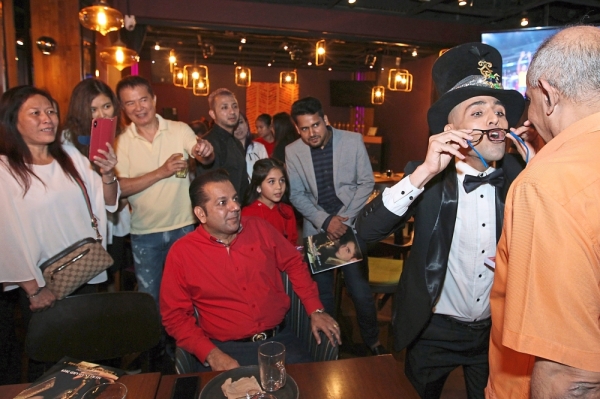 The magician entertaining guests with his tricks during the award presentation.

“After years of practising, I am really happy and truly honoured to receive the award, and to be in the company of one of the most popular magicians in the world,” said the 40-year-old who is based in Kuala Lumpur.

The father of two said the award recognised the years of hard work and preparation he had put into his art.

Moudini said prior to winning his latest Merlin, he went through some tough shows in Thailand before the final seven magicians competed for the title in Hong Kong.

“It was tough, everyone was so good at the finals and I am lucky that the judges and the audience enjoyed my performance,” he said, adding that he had to perform three tricks in seven minutes.

“When people clapped enthusiastically and screamed my name, I knew then I had a good shot at winning the Merlin.”

The award was presented to Moudini by International Magicians Society chairman Tony Hassini in Kuala Lumpur.

“We have over 37,000 members worldwide and we honour magicians who have achieved the highest level in their craft on the national and international stage,” said Hassini who had flown in from New York to present Moudini with a trophy and certificate.