All decked up for the season

By EMIRA FARAHNAZ and

Dazzling reindeer and glitzy lighted arches are among the hotspots to take Instagram-worthy photos at IOI Mall Puchong.

IT IS that time of the year when shopping centres start looking like a magical place where reindeer frolic in the snow amid towering pine trees decorated with glittering lights and baubles.

And don’t forget the piped music of familiar Christmas tunes that never fail to make you sing along. Yes, Christmas is around the corner, and regardless whether the tropical sun is blazing hot or the monsoon rain is lashing heavily outside, malls in the Greater Klang Valley are in a cool, wintry mode as shoppers go about preparing for the festivities.

StarMetro takes a peep at more shopping centres in the Klang Valley and Ipoh to marvel at the Christmas decorations. A dragon that flaps its wings and knights in shining armour take shoppers at IOI City Mall  Putrajaya to the Middle Ages.

Bangsar Shopping CentreThis shopping centre in upscale Bangsar, Kuala Lumpur, has pulled out all the stops in its efforts to transform its concourse area into a wonderland in line with its “Christmas Under the Stars” theme.

A wooden reindeer automaton takes centre stage atop a circular shopping booth and all around it are Christmas trees laden with ornaments.

Hanging from the high ceiling and walls are boughs of green and red holly while shimmering white lights to resemble falling snow add to the Chrismassy atmosphere. This mall in the administrative capital of Putrajaya dares to be a little different as its centre piece is an orange dragon whose wings whooshes up and down as it sits atop a hillock at the mall’s Lower Ground Centre Court.

IOI City Mall general manager Chris Chong said the dragon and knights in shining armour were in line with the mall’s “A Medieval Christmas” theme.

“We hope this year’s theme will add some fun and excitement for shoppers, especially children who will be enthralled by the dragon and the knights,” he added.

IOI Mall PuchongInstead of the traditional Rudolf the Red-Nosed Reindeer and his sleigh-pulling gang, for IOI Mall Puchong’s centrepiece there are dazzling intergalactic reindeer and glitzy lighted arches set beneath a chandelier. Its general manager Roger Ko said the holiday season was all about cherishing memories and celebrating the spirit of togetherness with friends and family. 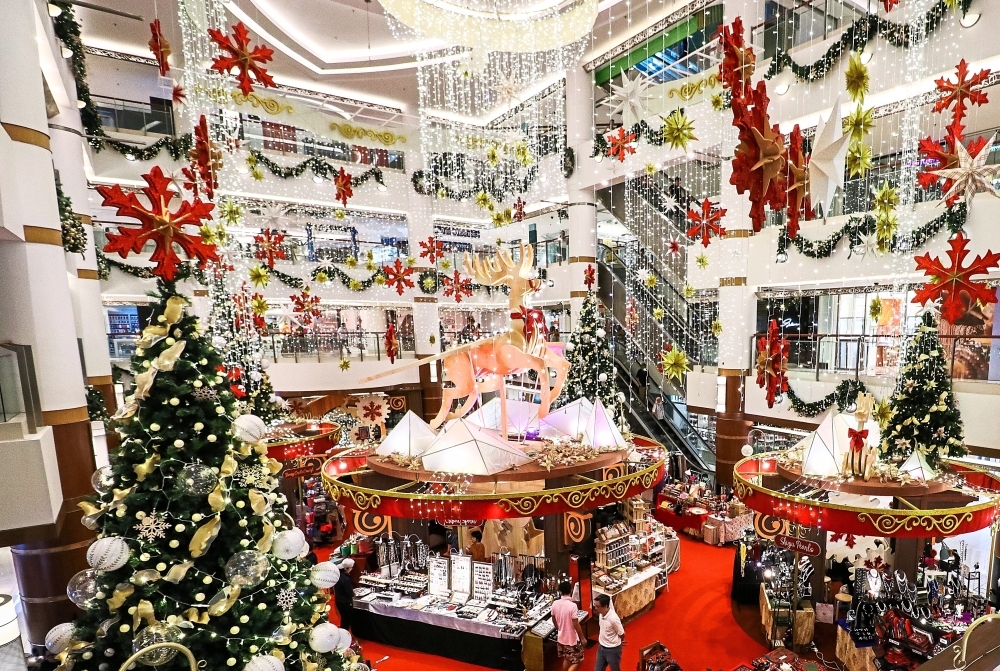 The WeldIn line with the tradition of gift-giving during Christmas, The Weld Kuala Lumpur’s decor features gift boxes hanging from giant pastel-coloured balloons that will definitely appeal to children. Like other malls, this mall is festooned with colourful fairy lights.

Ipoh ParadeIt is winter time at the atrium of

Ipoh Parade where there is a carnival atmosphere with merry go round, colourful balloons, snowmen and Christmas trees. Cut-out snowflakes and huge balloons were also hung down from the top while a merry-go-round is situated across from the main stage area. Children playing on a slide at Aeon Kinta City mall.

The three Aeon malls in Ipoh – Station 18, Klebang and Kinta City – share similar Christmas decor with a stage, faux treehouse, tower and a children’s slide. There are also booths selling items such as decorations, clothing, sweets and bags.

Their themes, however, are different – Station 18’s and Kinta City’s are called “Jolly Christmas Land” while at Klebang, it is themed “A Million Stars Christmas Land”.

At Klebang, giant “stars” and glittering lights hang down from the ceiling while a tree filled with origami stars are set up near the stage.

At Kinta City, various dance and singing performances have been scheduled to entertain shoppers on weekends until Dec 22. The Christmas decoration at Aeon Mall Station 18 in Ipoh.