HELPING people in need is what the Lions Clubs International (LCI) aims to do, just like its motto, “We Serve”.

Lions Club of Kuala Lumpur City had started the Pediatric Cancer Project a few years ago as a part of LCI’s five-key project. The five elements in the project includes hunger, environment, vision, diabetes and paediatric cancer.

Now, it is Jayden Ban’s turn to receive help through the Pediatric Cancer Project. The two-year-old from Penang was diagnosed with a very rare form of cancer called neuroblastoma.

This embryonal cancer (solid tumor) affects mostly children under the age of five. Jeyden recovering at the hospital after the chemotherapy.

Neuroblastoma is a type of cancer that forms in certain types of nerve tissue. It frequently starts from one of the adrenal glands, but could also develop in the neck, chest, abdomen or spine.

Currently, Jayden has just completed his fifth cycle of chemotherapy in Gleneagles Medical Centre, Singapore. Doctors have advised that given the option of immunotherapy post-treatment, Jayden’s survival rate will be as high as 80% instead of just 40% with chemotherapy alone.

He will be undergoing immunotherapy to get rid of the cancerous cells in his body. His parents have chosen Singapore as the best place of treatment after having carefully evaluated the available expertise in this rare form of childhood cancer.

LCI Global Service Team (GST) vice constitutional area leader Datuk Patrick Chew said the Pediatric Cancer Project was one of their efforts to support the emerging needs of children with cancer. “Neuroblastoma is a rare form of cancer that requires special expertise treatment and is very costly,” said Chew, adding that the project served as a channel for the affected family to receive monetary aid.

Known as the heart and soul of the project, her passion and kindness has made it possible for the two families to receive help for their children.

Some of the steps Foo has to undertake includes checking the families’ background and of the patients’ to verify if the cases were indeed genuine. Once confirmed, information on flyers and social media were sent out so the public could donate to help the children.

“It doesn’t take much to help another person. With just a few small gestures, you can even save a life,” she said.

According to Jayden’s father, Marcus Ban, a project manager for an engineering company, Jayden was diagnosed with cancer in February. He was exactly 26 months old.

“When my wife and I first heard the doctor’s diagnosis, our hearts sank.

“I almost couldn’t breathe. My poor little baby has one of the rarest kinds of cancer at the age of two.

“We were all pretty devastated,” Marcus said.

It took Marcus and his wife some time to digest it and to finally research and understand everything they could about neuroblastoma.

“Understanding the cancer is very important as we needed to know what kind of treatment to give Jayden,” he said.

Calls upon calls passed as Marcus and his wife tried to search for help to save Jayden. The cost for Jayden’s treatment is not affordable.

“One day, a friend recommended Stella’s contact and I rang her up quickly.

“Thankfully, she said that she was able to help me and I felt my burden lifted a bit,” Marcus added.

Currently, the family is still short of RM250,000 for Jayden’s treatment.

The Lions Club of Kuala Lumpur City has appealed in its bulletin for donations to help Jayden by “giving him a fighting chance to have a shot at life as this would mean the world to his family”. 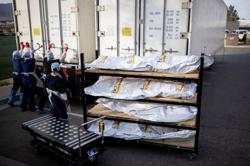