An angler with a sailfish caught off Rompin.

KNOWN as one of the top 10 sailfishing destinations in the world, Kuala Rompin in Johor has a lot to offer for serious sports anglers.

Located four hours from Kuala Lumpur and about two hours from Johor Baru, this place is a hotspot for anglers seeking to catch sailfish.

This year, the sailfish is back early – at least six weeks ahead of its normal season – according to boatman Zambri Othman, who offers fishing charters from Merchong.

Catching sailfish can be exciting. It gives plenty of adrenaline kick.

The game here is to prevent the fish from darting away with only rod, line and a small reel.

Sailfish has a potential of taking off to a speed of 110km per hour.

Once hooked, this fish will also perform the acrobatic displays, as it tail-dance to throw out the hook lodged in its mouth.

The challenge is in this tug of war, a battle that can last for an hour.

The hardest part here is to be able to keep the tension on the line and tire the fish in each of the runs it mounts.

Sailfish is a real fighter. It can burst into a surge, over and over again, and dive deeper into the sea, in a bid to escape.

Of course, the other challenge is to use a light poundage rod and line to fight with it. 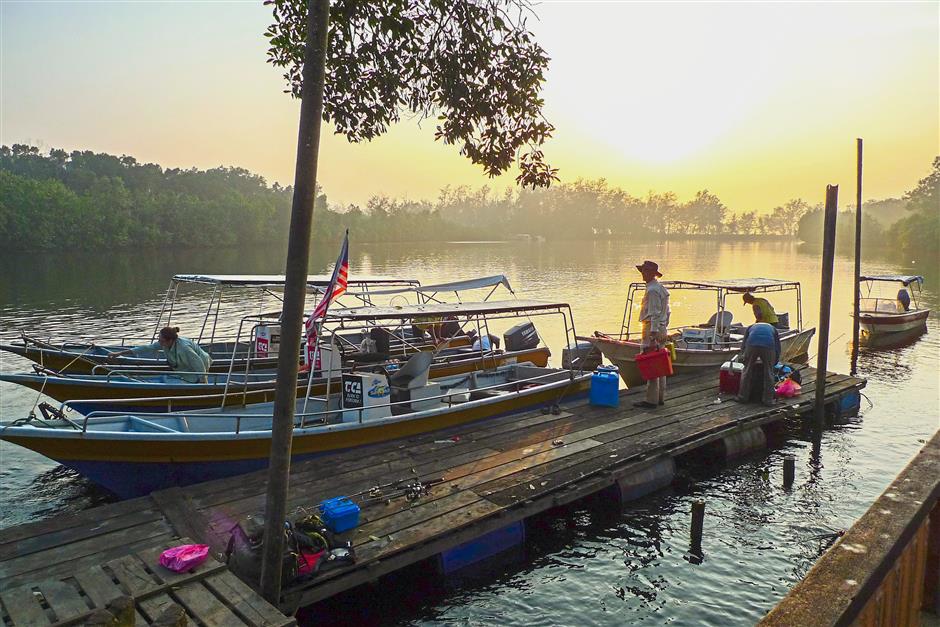 Anglers getting ready to board their boat at Merchong jetty for a sailfishing trip.

One needs a good boatman who knows the fish habitat off the Pekan-Rompin coastline to spot this species.

Another tell-tale sign is to look for a school of anchovies, one of sailfish’s main diets.

One also has to know the water temperature, wind condition and the current movement to be successful in spotting the fish.

As for the fishing method, there are a few – trolling, drifting, popping, casting, jigging or bottom fishing.

The drifting method is straightforward and simple. Kembong, selar, sardines and tamban can be used as live bait. It is attached to a hook, which is pierced on the body near the upper fin, and released back into the sea.

The struggling motion as it makes its way, with a balloon tied to the mainline to maintain a certain depth, would imitate a fish in distress. This would attract the sailfish.

Trolling, casting and jigging, however, require some preparation and knowledge in picking up the right colour of lures and skirtings to charm the sailfish.

Bottom fishing, which is less effective, is a straightforward technique. One has the option to reel in other species if they fail to get the sailfish. As part of the catch-and-release practice, sailfish needs to be revived after a long fight before it is released back into the sea or it will drown due to fatigue.

Deep runners and surface lures are commonly used for casting. The lures are attached to a single hook rather than treble hook as it is found to be more effective.

Of course, carbon barbless circle hook, preferably a 4/0, is recommended.

The idea of using this hook is to allow it to disintegrate with the sea water after the fish is released back to the wild if the hook is not removed.

I used a 40lb to 60lb leader and attached it to a 30lb or 40lb monofilament or braided line. Anything beyond the recommended poundage can be overkill.

A medium size multiplier or spinner, between 4000 and 4500 series, is my favourite. It is normally attached to a medium-heavy or heavy rod, depending on the size of the fish sighted in that particular area.

Sailfish is a silent predator. So, watch out for a light nibble, followed by a sudden jerk and a quick run. Don’t panic but strike the line to set the hook in.

The sailfish would take several dives and mount multiple runs. It would also surface to perform tail-dance and dive back into the water in its attempt to dislodge the hook.

But keep the line tension tight. This will prevent the fish from throwing out the hook and escape.

The fish can be landed when it is tired.

But remember to practise the catch-and-release method.

To release the fish back, it needs to be revived, allowing it to gather the strength back from the fight, or it can drown.

The catch-and-release practice is important to keep the Rompin sailfish population.

A total prize purse of RM145,000 is up for grabs at the Igloo Surfcasting Challenge 2018 this May 6. Fishing fans should head over to www.ufl.com.my for more information.