A fireworks display livening up the night at Chap Goh Meh celebrations in the Thean Hou temple last year. — filepic

THE joyful celebration of Chinese New Year (CNY) comes to an end today, the 15th day of the first lunar calendar month which is also known as Chap Goh Meh.

Today may signify the last day of Chinese New Year celebrations but it is more widely known as Chinese Valentine’s Day among Malaysians when singles would hope to find a suitable partner.

Traditionally, men and women come out and mingle on this day in hopes that love blossoms.

Such traditions are observed by the Chinese community in Malaysia while different clans might celebrate the occasion in their own special way.

StarMetro talked to three clans about the similarities and differences in how they observe Chap Goh Meh. 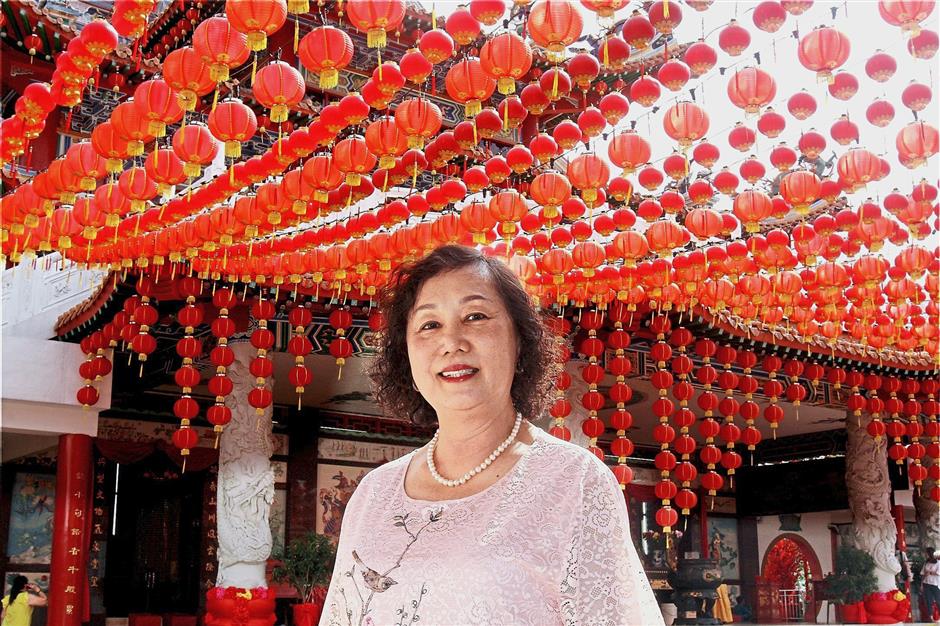 Tan says the most important element of the day is the reunion dinner.

Klang Hokkien Association president Datuk Teh Kim Teh said Chap Goh Meh (which is Hokkien for the 15th night) is also known as Yuan Xiao Jie or lantern festival.

“The streets are usually filled with lanterns and the community gathers to celebrate the occasion together.

“Couples would date and during ancient times in China, singles would pray for love and hope for a match during Chap Goh Meh.

“It is also a day for youths to get to know new friends,” he said.

Teh also said that the tradition of throwing oranges into water during Chap Goh Meh originated from the Hokkiens in southern China.

“Our ancestors who came to Malaysia brought along these traditions and we continue to observe the practice.

“Single women would write their contact details on the mandarin oranges and toss them into the river, hoping a suitable partner would pick them up.

“Some men would even go deep into the water to pick up the floating mandarin oranges.

“Kam, the Chinese word for mandarin oranges, also sounds like the word for prosperity and good luck. It also has the symbolic meaning of having good luck in love,” he said.

Teh added that Chap Goh Meh used to be a merry affair in Bagan Hailam, Klang, but the tradition was slowly fading.

“I hope that other associations can uphold the tradition as it is part of the Chinese culture.

“They can think of more creative ways to update the tradition and incorporate it into current times,” he said. 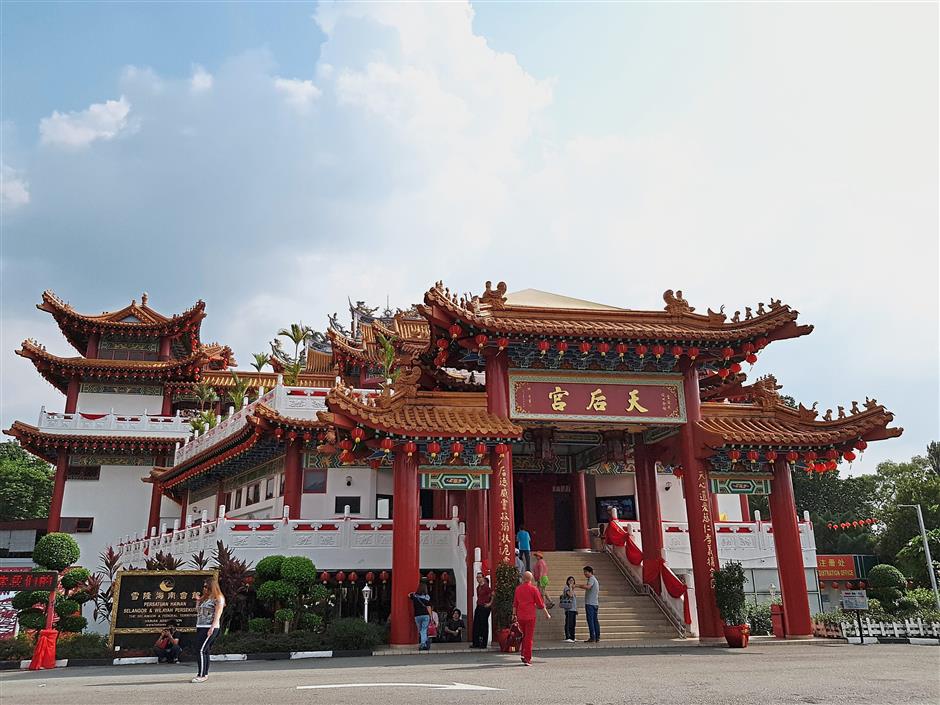 Decorative lantern appreciation sessions will be organised in the Thean Hou temple today.

Selangor and Federal Territory Hainan Association women’s section head Tan Kai Jong said the Hainanese people always treat this festival as a significant occasion because Chap Goh Meh symbolises the end of the spring festival and it is a tradition that should not be forgotten.

“Interestingly, the young, shy Hainanese men from Wenchang in Hainan, China, would use Chap Goh Meh as a precious opportunity to confess their feelings to the women.

“They would steal vegetables from the houses of the women they love, because the men then believed that the act of stealing vegetables on Chap Goh Meh would bring them good fortune and better luck in attracting the opposite sex throughout the year.

“However, the most important element during this festival is the reunion of the whole family for a scrumptious dinner together,” she said.

“What makes the Hainanese people slightly different from the other clans is making and eating the Hainanese snack Yi Bua, which is a coconut kueh made from glutinous rice flour, sesame seeds, roasted peanuts and shredded coconut, instead of sweet dumplings such as tang yuan.

“The snack is soft and smooth in terms of texture and sweet in taste.” Tan added. 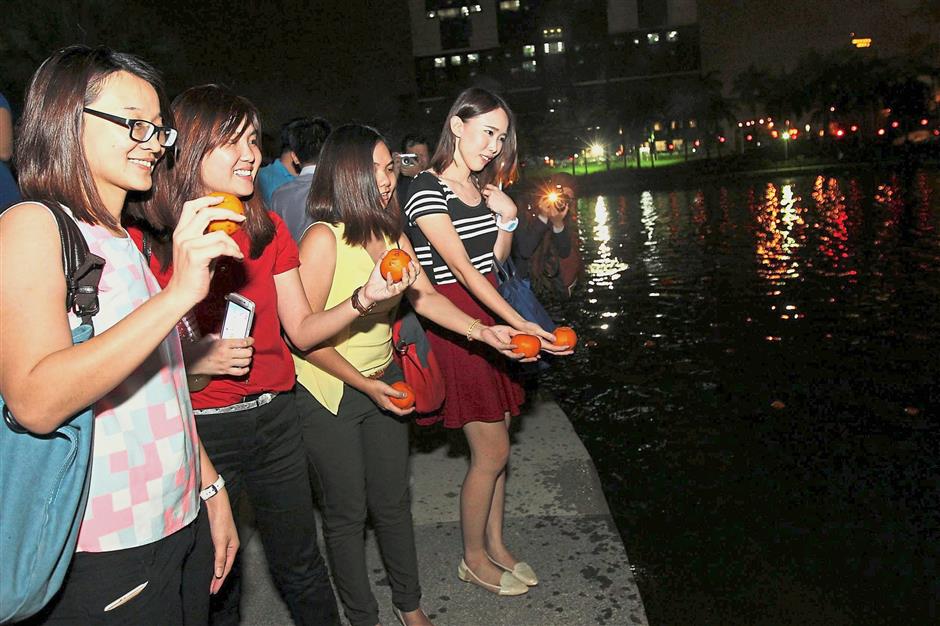 A group of women getting ready to toss mandarin oranges into the lake. — filepic

“However, eating the Hainanese coconut kueh is not restricted to Chap Goh Meh. It can also be eaten on any other occasion,” she continued.

In conjunction with the festival, Tan said there would be tons of activities organised for the public in Thean Hou temple, including lion dance performances, lantern riddles, decorative lantern appreciation sessions, as well as a series of stage performances by various artistes.

“We will also be holding a lantern-making competition in the temple during Chap Goh Meh as a means of engaging with visitors, making it one of the main highlights of the day.

“Not only that, the association will also organise an exclusive game known as the “embroidered ball tossing session” at the temple, where women would be invited on stage to throw an embroidered ball towards the men standing in front of the stage.

“Those who catch the embroidered ball will be rewarded,” she said, adding that in ancient times, the traditional game was only meant for women from affluent families. Teh (third from left) greeting the lions at last year‘s Chap Goh Meh celebration organised by the Klang Hokkien Association.

“During the Tang Dynasty, the city palace gates would be closed at 11pm, except on Chap Goh Meh when it would remain open.

“On normal days, women were not allowed to show their face and leave the palace, but on this day, men and women would come out and celebrate the occasion together,” he said.

The merriment of the day is captured in rows of brightly lit lanterns with the celebrants exchanging romantic poems.

As it is the first full moon since Chinese New Year, residents staying in areas close to the sea or river can witness two full moons due to the reflection in the water.

“There is a saying ‘yue yuan ren yuan, (the moon is round and hope that it will bring better relations with people), encouraging most people would make a wish in the temple to find a suitable partner.

“While most Chinese would pray to Guan Yin and Guan Gong during the celebration, the difference is that the Hakka people pray to deities such as San Shan Guo Wang and Da He Gong instead,” he said.