Teoh has been producing the ‘heong peah‘ for more than 20 years at his house in Kampung Baru Gunung Rapat.

KAMPUNG Baru Gunung Rapat is synonymous with the traditional Chinese biscuit heong peah, although the origins of this sweet treat is said to be in Teluk Intan, which is about 60km away.

“According to some elders, the early heong peah bakers in Gunung Rapat learned the trade in Teluk Intan, then known as Teluk Anson.

He said today, there were more than 10 small heong peah factories in Kampung Baru Gunung Rapat, which is located on the fringe of Ipoh city centre.

On how the village became famous for heong peah, Tee reckoned that it was because the villagers gave their full focus to perfecting the recipe over time. 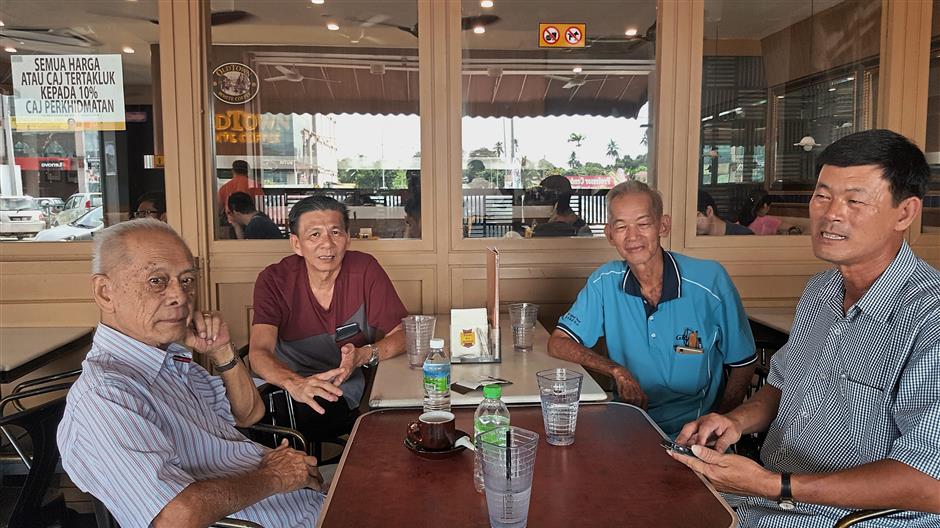 (From left) Yep, Cho, Lee and Tee are proud of how far the village has come in terms of development.

The villagers, he said, were very discerning when it came to getting the heong peah to taste right.

“The biscuit must be fresh from the oven,” Tee said, clearly proud that the village had earned a name thanks to heong peah.

Baker Yee Hup, who started small by making and selling heong peah in the village, has today expanded his business to include other types of traditional Chinese biscuits, which he also exports overseas.

Meanwhile the smaller factories, mostly family-run, continue to be an integral part of the village’s identity.

Teoh Seng Kwok, 49, is a second-generation heong peah baker. His 70-year-old mother Chew Yoke Kim, who started the business, continues to work with him.

Chew started out working in a factory producing heong peah before setting up her own business.

“Durians are very popular nowadays and the new flavour has been well-received,” he said, adding that the other two flavours were original and black sesame.

Teoh stressed that the biscuits had to be crispy, a measure of their freshness.

These days, he added, the sweetness of the heong peah was also reduced to cater to the health conscious.

A typical work day for Teoh starts around 5am and ends at 7pm, sometimes he starts as early as 3am to meet production demands. 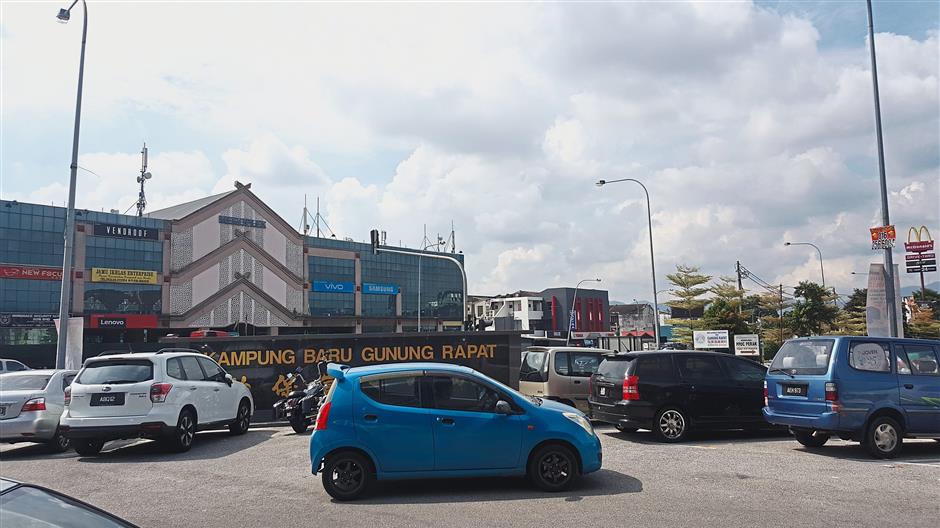 The main entrance to Kampung Baru Gunung Rapat, along Jalan Raja Dr Nazrin Shah in Ipoh, is a thriving commercial area these days.

Kampung Baru Gunung Rapat, which has some 900 houses and a current population of 5,000, is among the large new villages set up during the Emergency period.

In the old days, the villagers were mostly rubber tappers as well as vegetable and fruit farmers.

With much of the agricultural land given to development, most villagers are now businessmen, petty traders and hawkers.

Like most villages, Tee said, Kampung Baru Gunung Rapat was also a greying community as many of its youths had migrated to big cities in search of jobs since the 1970s.

Today, there appears to be more business opportunities in Gunung Rapat that can help check this outflow – one such sector being tourism.

Gunung Rapat has become highly popular among food lovers from both Ipoh and other states.

Many of its coffeeshops are packed for breakfast and lunch. Despite traffic congestion, people continue to visit the place to enjoy favourites such as dim sum, noodles and pau.

Strategically located and only 7km away from the Simpang Pulai Toll Plaza, Gunung Rapat is a good stopover for meals or to shop for food.

The road leading to the village’s main entrance is a hive of activity all day long.

Retiree Lee Ah Jee, 71, is perhaps one person who can tell how the village has evolved over the decades.

“The houses here were all wooden and attap ones in the old days,” said Lee, who was a postman for 32 years. He retired in 2001.

“There would be letters with incomplete addresses and the names of recipients written in Chinese.

“But they would still reach the recipients because we all knew each other in the village,” he said, visibly proud of the place where he was born and bred.

Despite the bustle of a “village in a city”, Kampung Baru Gunung Rapat still has its old-world charm.

While Lee is single, retired teacher Yep and salesman Cho are married with three children each, all of whom are now in Kuala Lumpur and Penang.

With good connectivity and development, the new village will continue to evolve in the right direction.

Travelling is convenient from this village to cities like Kuala Lumpur and Penang.

In fact, the Sultan Azlan Shah Airport in Ipoh is just 2km from the village.

Traffic congestion in the village on weekends is a good sign of development so the locals do not mind when they experience a little inconvenience, especially if these out-of-towners are here to purchase heong peah.