Quiet village by the sea

The beach area outside Kampung Hailam is still a landing area for local fishing boats, where two long wave-breakers, which also function as a waterfront promenade, help keep the artificial cove waters calm for boats to shelter.

NESTLED right next to Malacca’s oldest club, prosaically named the Malacca Club, Kampung Hailam is nearly as old as the institution, when Hainanese emigrating from China settled at the shoreline.

To get to the village, one has to drive along Jalan Tanjong Kling, en route to Sungai Udang and Masjid

Tanah, then turn left at the traffic lights just after the Everly Resort Melaka into Jalan Pekang Tanjung 2.

There is no traditional da men or village arch typical of other Chinese villages, and only a Malacca City Council landmark to show the border of Kampung Hailam.

Starting out as fishermen, the settlers unsurprisingly also branched into the kitchens, as their fellow Hainanese have, in other parts of Southeast Asia especially during British era.

Lim Heng An, 76, who was born and bred in in the village, said the club was “the place” to be back then. He said there were many mat sallehs (local slang for white folk) who were members at the club pre-Independence and even for some time after.

“After finishing school, I wasn’t the sort who could study, so I went to the Terendak army camp and worked as a cook, when the British were still stationed there.

“When they left, I also left and became a cook on board a ship until I retired and came back here,” said Lim.

Apparently dozens have been successful, or will be getting their wishes granted judging by the streamers hanging from the village’s ‘wishing tree’.

More typical of villages, be it a New Village or otherwise, those left in the community are increasingly older residents and retirees. Even some retirees have moved out.

“A couple of old guys still go out and fish from time to time, but most of the fishing is done by the Malay community now,” said Lim.

Until about 10 years ago, there was not even a community hall and the menfolk, after returning from the day’s trip out to sea, would just sit in a rustic pondok under the tree to relax or play mah-jong,” said Lim.

Now, a brick community hall sits at the shoreline, and the retirees go there to play mah-jong on weekends.

Pointing to a table nearby, Lim said half the people there were all back for the weekend from other parts of the country, mainly the Klang Valley.

“It’s really quiet here, where nothing much ever happens,” Lim wryly notes.

In fact, crime is something of a surprise here, where a house break-in back in 2011 was publicised in the local section of one Chinese daily and is still pinned up on the softboard at the community hall.

Established in 1890, the Malacca Club, just next door to Kampung Hailam, is easily the most well known landmark in these parts here.

“Otherwise, from time to time you get an addict coming around to steal shoes,” said Wong See Kiow, 51.

Wong also recalled that although the road leading to the club was properly tarred, it was not until about 15 years ago that the village’s roads got tarred.

For a fishing village, apparently deities like Tua Pek Kong and even Matsu/Mazu get short shrift here.

“Tua Pek Kong is more of a Hokkien deity, and we only just started celebrating Mazu’s festival this year,” said Wong.

Closer to the club premises, there’s also a “wishing” tree, similar to the one in Sekinchan, where for RM5, one can inscribe your wishes, tie it to a traditional coin and let fly unto one of the branches in the hopes that the wish-cloth catches and one’s wish comes true.

Batu Pahat-born Pang Nu Shi, 76, a Peranakan who married a local Hainan man and settled here in 1972, recalls how most houses were built from atap and bamboo.

“A lot of salt-processing took place here along with the fishing, but you can still see which households still go out, by looking at the small fishing boats sitting under boatsheds next to the houses,” she point out.

Hang Tuah’s tomb, which is located on a small rise opposite the Prisons Department’s corrections institute in Jalan Pekan Tanjong 2, less than 500m away from Kampung Hailam.

Less than a kilometre from the village, one major landmark is legendary Malaccan warrior Hang Tuah’s reputed tomb, a popular tourist landmark.

“It’s not far, you just travel down this same road and after the Corrections Institute, you have a Malay graveyard on your right and the tomb is up on a small hill,” said Muhammad Jafar, 55.

Muhammad, who lives in nearby Kampung Kelungkung, runs a large foodcourt which caters to the night crowd coming in for some sea breeze. “Last time, there used to be kelongs out there, but now you don’t see these anymore. But it’s a good place because the fishermen beach here, so you get the freshest catch,” he said.

Indeed, the waves just outside Muhammad’s eatery is much gentler, thanks to two artificial wave-breakers built about 500m apart, which form an artificial cove and also become a promenade when it is not monsoon season.

Similarly, after fears in 2011 of wave erosion, large rocks have been placed along the open shoreline across Kampung Hailam for a similar function.

With all these, Kampung Hailam may not be long for this world though, following a May 2015 Sessions Court decision which found that the village has been occupying the land it is on without title, and the villagers will have to move out next year, although compensation has been negotiated. 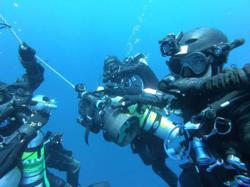 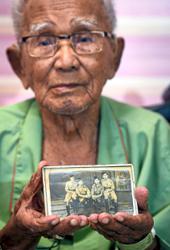