Catville by autistic painter Tam. Notice the detail in the cats’ eyes and window shapes.

THEY say you cannot question art.

That what you see is entirely up to your own interpretation, and that the artist’s view does not matter.

But the Nukilan Jiwaku art exhibition at Balai Seni Menara Maybank, which features works by artists with special needs, is like an endless questionnaire.

It is a show that will bring to mind thousands of “why”, “what” and “how”. 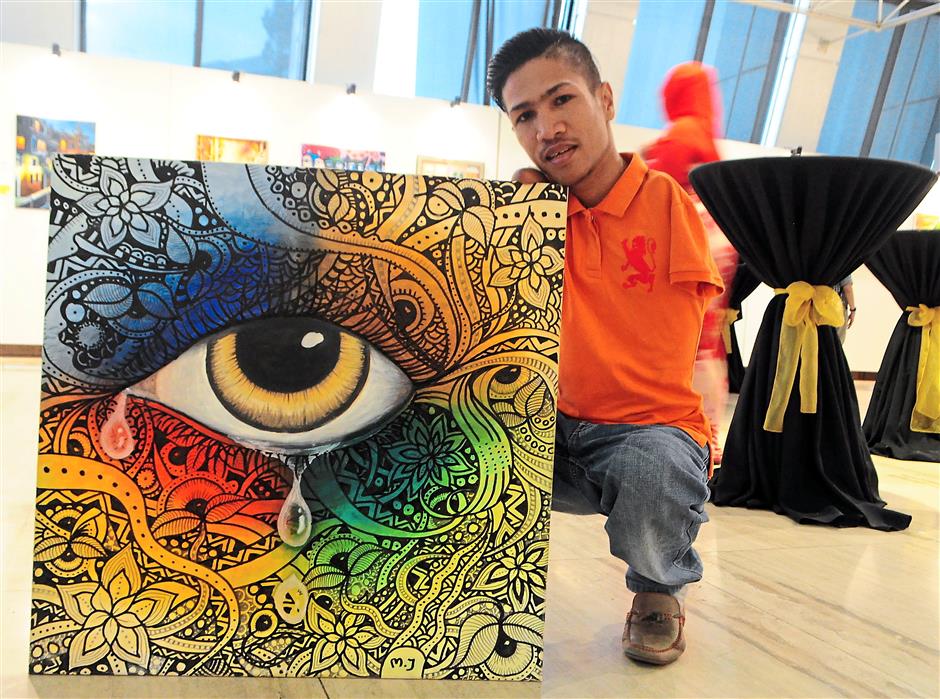 Mat Jamil, a foot amd mouth artist poses with an unamed artwork at the show.

The artists’ parents have some of the answers. Courage. Determination. Persistence. Hard work.

There were a total of 26 artists with 16 who were mentally challenged and 10 born with physical disabilities.

For each piece sold, 30% goes to the Malaysian Council for Rehabilitation (MCR).

This is something the artists are proud of. Naturally, they want to say something.

“Charm counts,” said Mat Jamil Ramli , 31, with a wink, who was born without arms.

He was referring to how he met his wife (on Facebook) and Peacock, his 57x70cm batik piece.

The belief that she was put on Earth to bring joy, works for Izzati Shahrin, 24.

She said her acrylic piece, “Flowering” is a reflection of what she sees in her mind’s eye – flowers in heaven.

That is why they are so colourful.

She is also the type who wears her colour philosophy. No blacks or greys for this young lady.

Her mother did try to introduce her to more sombre colours once.

She insisted she knew better. 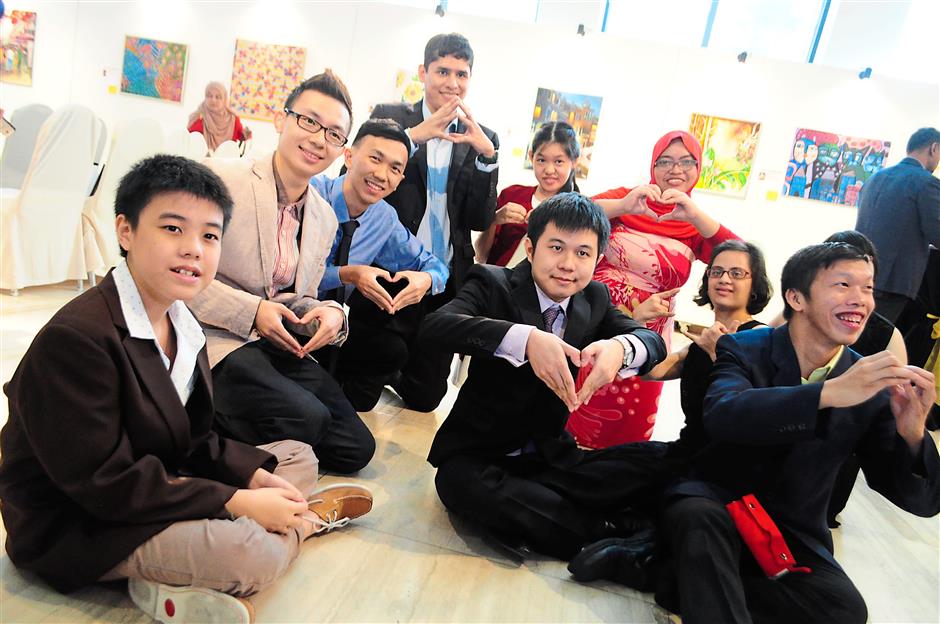 What did mum know? She was not an artist, after all.

Allowing oneself to be constantly inspired by everyday things gets Sarah Yusop, 25, going.

Her drippy “Watering Fruits”, she says, is a happy picture because it features her favourite produce – mango, orange, durian, apple, watermelon and durian.

She cannot stand the smell of durian but the thorns hold a certain fascination.

Her next painting will feature Miley Cyrus in her role of Hannah Montana, the Malaysian flag and a kampung house.

“I have done well,” she says with a bow when asked how she feels about her choice of subjects.

In addition to painting, Sarah wants to be a baker. Her chocolate brownie cakes, she said, were really good.

Stephanie Tam, 17, sticks to being true to herself. 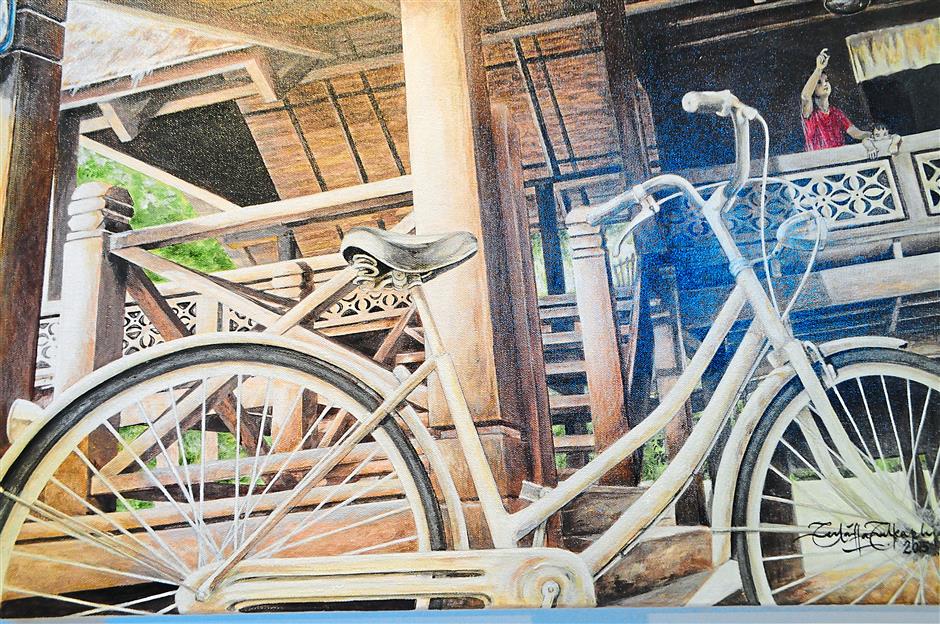 Different-shaped windows-circles, triangles, squares- in the buildings of her modern abstract, “Catville” makes you wonder about her take on architecture.

But what is finished is finished. She has been promised a trip to a CD shop after the show and that is all she wanted to talk about.

When asked about his work, “Galaxy”, the 25-year-old simply summed it up as, “splash”, which was precisely how got the starry effect for his piece.

The art show is the end result of an intensive five- month art training programme organised by Maybank Foundation in partnership with MCR and Universiti Malaya.

“Sales were spurred by sympathy at first.

“But when we put up the second show we had Indonesian buyers.

“They said the works were of a high standard. 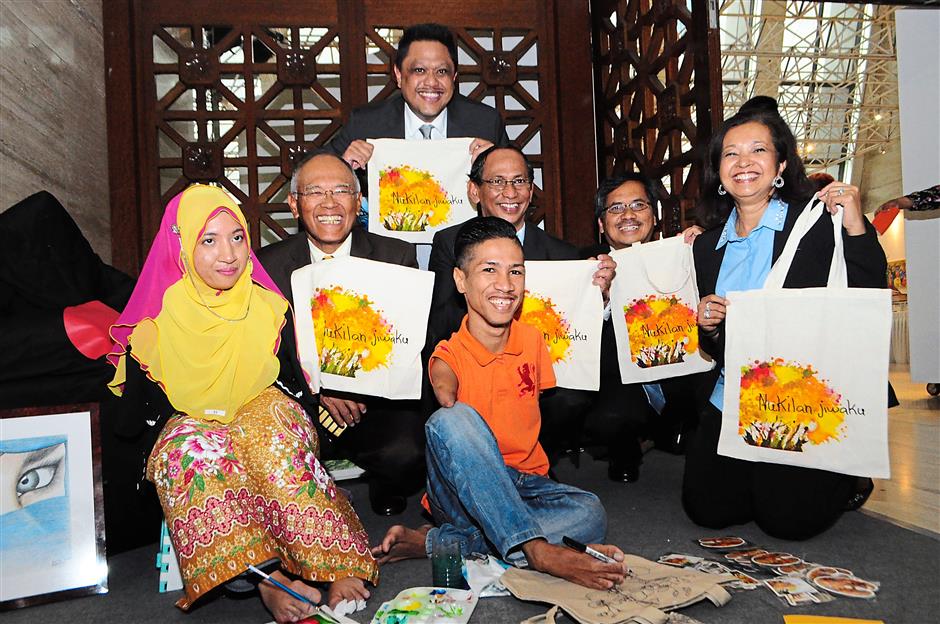 “That was when we went back to the parents, asking them for the commitment to allow us to train their children,” said Noor Feezailah Noordin, its project director who started the programme in 2012.

Nukilan Jiwaku can be viewed from 10am to 5pm (Monday to Friday) until Dec 4 at Balai Seni Menara Maybank.