Halloween’s roots can be traced to ancient Celtic and Gaelic culture (modern-day British isles), where it was celebrated as a festival to honour the dead.

The tradition of putting up macabre symbols and disguising oneself in a costume served to scare away evil spirits and protect the living.

But in this day and age, and especially in this part of the world, Halloween is of no religious or cultural significance and most Malaysians see it as just another occasion to enjoy themselves.

Here, it serves mostly as a creative theme at parties and events, providing the fun in seeing the various spooky costumes and how people dress themselves up to look scary.

For those wanting to celebrate Halloween with a bang, here are some tips by John Gullidge, attraction manager of Lynton V. Harris’ Scream Park in Sunway Lagoon.

Instead of going through the trouble of organising something yourself. Halloween parties are pretty common but on a bigger scale, there are theme-park events such as Sunway Lagoon’s Nights of Fright, Lost World of Tambun’s Spooky Halloween in Ipoh, Genting Highlands’ Halloween party and Legoland’s Brick or Treat Party Nights in Nusajaya, Johor. No festival of fear can be complete without watching some great Halloween films. Tim Burton’s 1993 classic The Nightmare Before Christmas is a great family movie, but films like Halloween (1978) and Trick or Treat (1986) are good ones for those who enjoy a bit of a scare. Malaysian cinemas are also screening some good titles to catch this month: Goosebumps, which is based on R.L. Stine’s popular children’s horror book series, and Tales of Halloween, which combines 10 scary stories in one film. 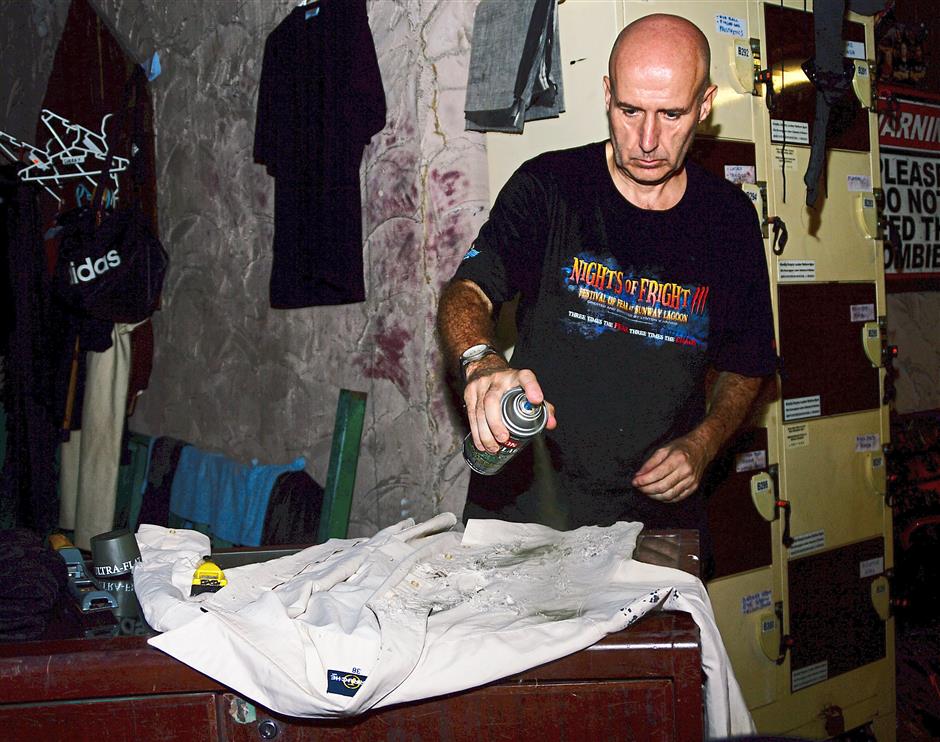 Costumes are central to Halloween and many costumes are pretty easy to make with a bit of creativity. When it comes to zombies and other ghoulish characters, all you need is old, unwanted clothes. Use a coarse hand rasp (a tool for filing wood) to shred portions of the clothing, spray brown or black paint to give it a dirty appearance, and splatter fake blood on it to give it that finishing touch.

4 Make your own horror video 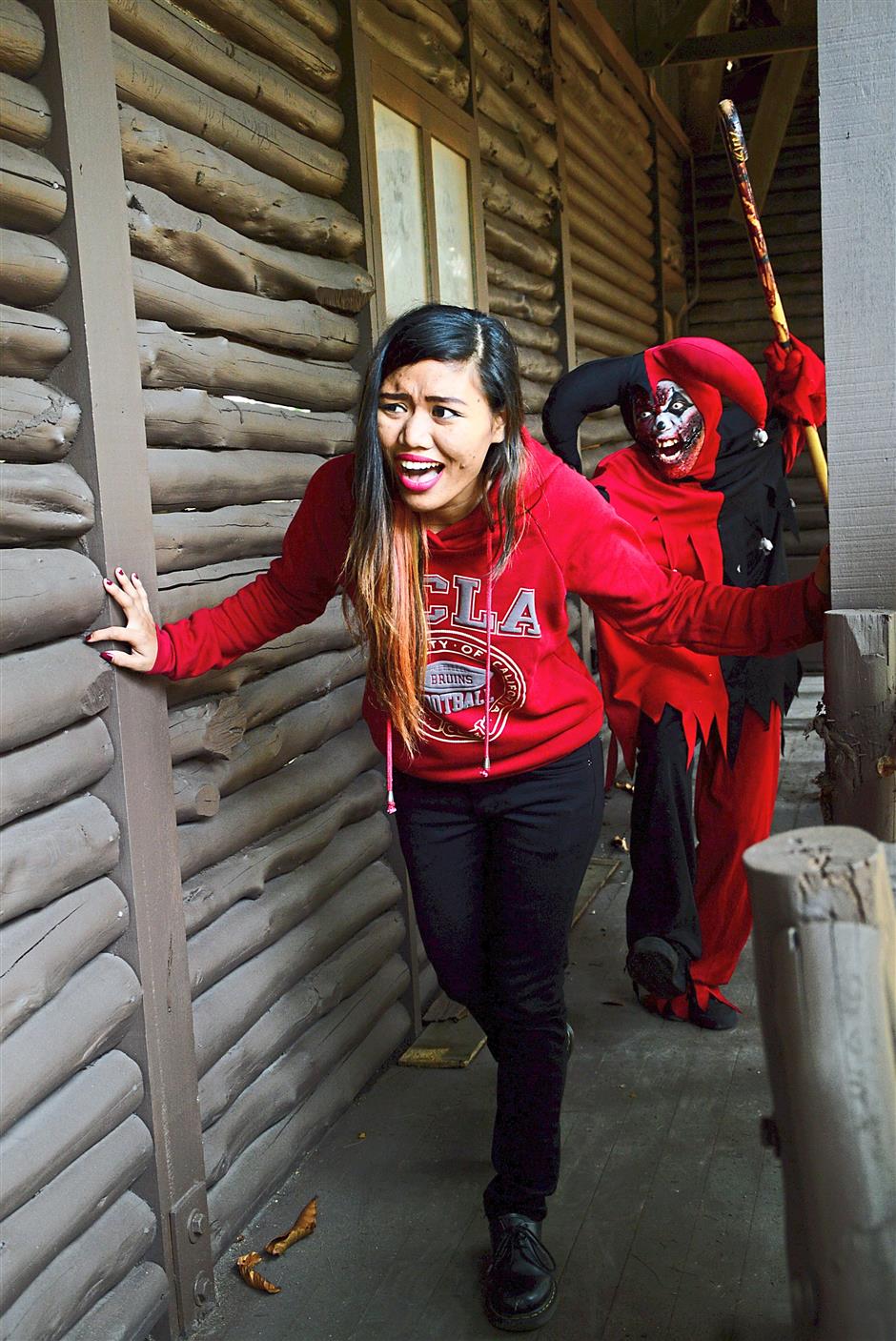 Gather some friends together and have fun shooting a homemade horror video. Put together scary props and costumes, and get some actors who can really scream for a spine-chilling production. For ideas on good camera angles to create suspense, watch some well-known horror movies for inspiration. Add in homemade sound effects and put it all together via easy-to-use video editing software for a scary flick you can share with family and friends. Scary makeup can be pretty easy to do and there are many ideas and video tutorials online. Recipes for fake blood primarily use a mixture of water, corn syrup and food colouring, and most recipes are edible. Combining toilet paper and paper glue to make papier-mache is an inexpensive way to create realistic-looking open wounds and fake scars that can be safely removed later. People scare each other or pull scary pranks during Halloween, but Gullidge insists that the scarer must do so in a responsible manner. For example, scaring someone who is in the middle of texting, carrying heavy objects, or on a staircase can be dangerous, and this takes the fun out of the scare. Remember, the point is to frighten others first and then laugh about it later. 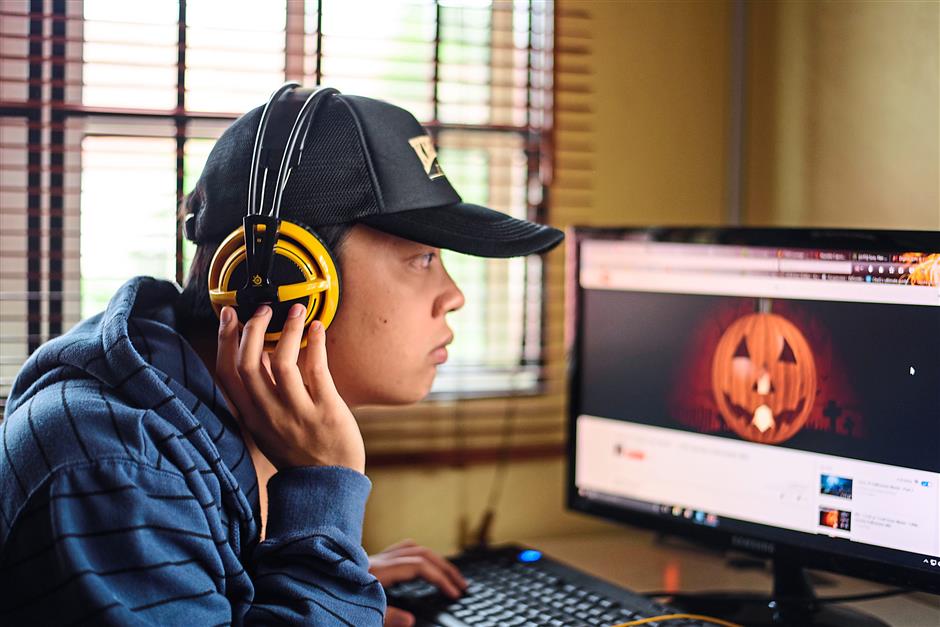 Get some spooky music to set the mood, especially if you plan on hosting a party. Horror movie soundtrack make great ambient music, and Gullidge’s personal favourites are from Halloween, Nightmare on Elm Street, Hellraiser and an Italian film called Suspiria. But if you are more in favour of having a fun party with upbeat music, there are many songs that fit the theme, and Michael Jackson’s Thriller is a good one to start with. Decorating a home or workplace for Halloween will put everyone in the mood. For those who plan on trying pumpkin carving to make jack o’ lanterns, there are designs that can be found on the Internet. There are many other ideas online; Gullidge himself has seen one with a Malaysian flavour – a “pocong” (a living corpse in a burial shroud) made from plastic bottles and a big white sheet. Halloween does not have to be all about scaring. Have some delicious fun by making spooky foods and treats; for example, carving sausages to look like severed fingers and adding ketchup for blood, or embedding blueberries inside longans to make eyeballs, which you can serve in glasses of rose cordial syrup. Get creative! Check out recipes on the Internet for more yummy ideas. 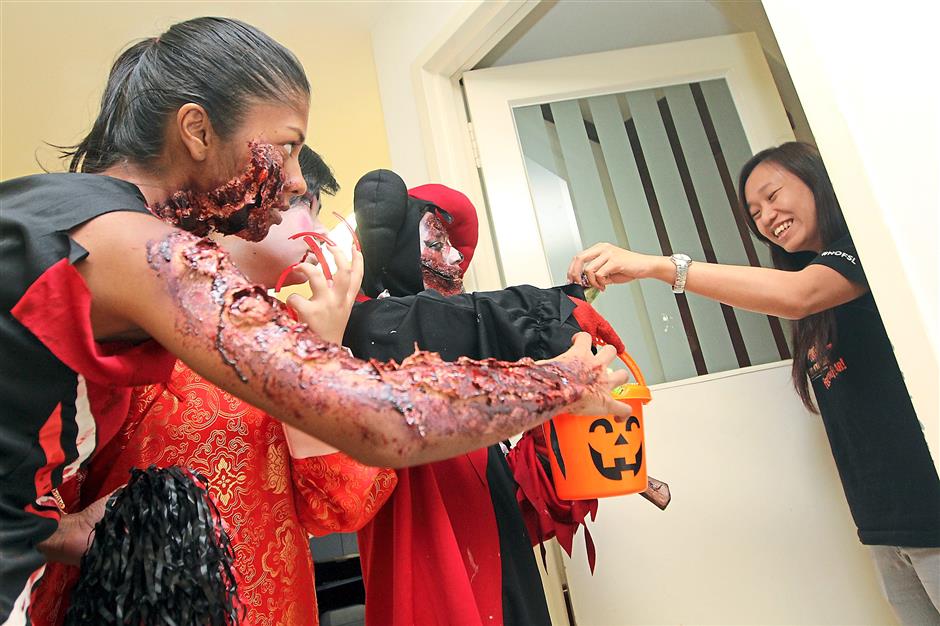 Trick-or-treating currently strictly only happens in expatriate neighbourhoods, but why not be the first Malaysians to get things started? Gather the support of members in your community and have them join in. Participating trick-or-treaters can visit designated decorated homes to collect sweets and snacks from participating homeowners, and then gather at the end of the night for one big party. Just be careful not to disturb other neighbours.

Special thanks to Sunway Lagoon for their collaboration on this story.