Beating a path to Lagong Peak

IT WAS a scorching 35°C when we started the hike up to Lagong Peak, which stands at 575m above sea level, from the Taman Botani Kepong west entrance to the Forest Research Institute Malaysia (FRIM).

The return trip would take five hours with possibly some jungle bashing, as we would be traversing a virgin forest.

A parang and sturdy stick were added to our usual hiking essentials of water, energy snacks, mobile phone, raincoat, mini first-aid kit, and compass. Cameras are optional, but recommended.

On hot days like these, it is important to stay hydrated and not over exert. To escape the heat of the midday sun, we ducked into the Bukit Hari trail, a longer but shadier tree-lined route offering some respite from the relentless sun. The easy gentle slopes were also a good warm-up for what was to come.

Up a grassy ridge, and across an open meadow, we got to our first landmark. A small hut signals the entry point to the forest with the single-track Pacat Trail immediately rising up, winding through trees, shrubs and broadleaf vegetation.

All the way up, the crunching sound of dead leaves matched the cadence of my steps until we hit the Pipeline Trail.

Here, the terrain turned rocky as we followed the pipeline that runs on the ground, eventually leading to a pool. The way to Lagong Peak is to get onto a path on the right, somewhere along the Pipeline trail.

We missed it the first time, back tracked and found the not-so-obvious track without losing too much time. We also took a good look, so that we could recognise the spot for future treks.

Back on track, our party of seven pushed on, having walked for an hour by now. In the virgin forest, the trail was easy to follow, opening to a clearing with a high-tension pylon after 30 minutes. At this 350m vantage point, a row of pylons stretching out in either direction can be seen.

Though we may hike at different paces, there is safety in numbers. We wait for each other, we help each other through tight or difficult spots and we give support when needed. And along the way, we just enjoy each other’s company. 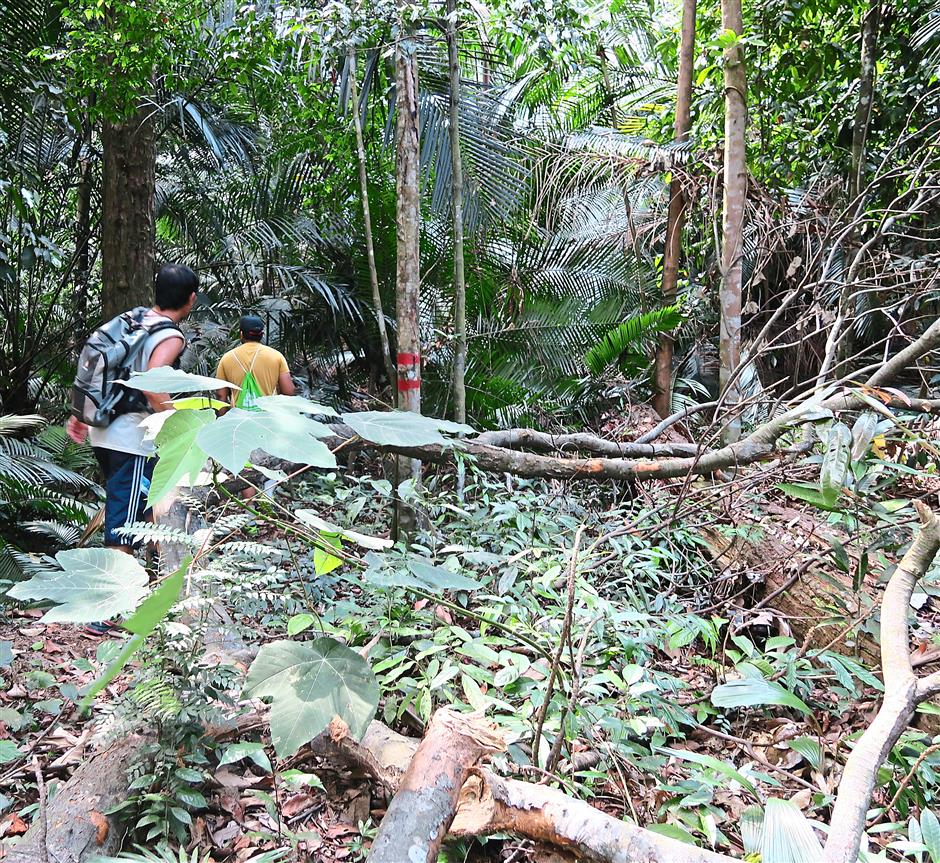 Continuing into the forest after the clearing, the long, straight, steep climb with fallen trunks across the 1.7m-wide trail was strenuous with an elevation gain of 50m. Luckily, the trail descended after that, giving our knees a much needed rest.

As the third hour approached, we took a five-minute break to brace ourselves for the final brutal uphill. And brutal it was, and slow.

There was no clear path so we hacked our way through leafy vegetation, branches and thorny trunks, guided by tree trunks painted with twin red stripes.

For the next 90 minutes, the alpha males in the group wielded the parang, beating down a clear path, while the rest of us spread out, searching the dense foliage for the next marked tree.

Finally, after three hours, we reached the 575m peak, which was overgrown with creepers and not much bigger than my living room.

Hot and thirsty, I was ready to throw in the towel and wished I could be helicopter-lifted out. I have gone longer and further than this before, but have never felt such utter exhaustion. 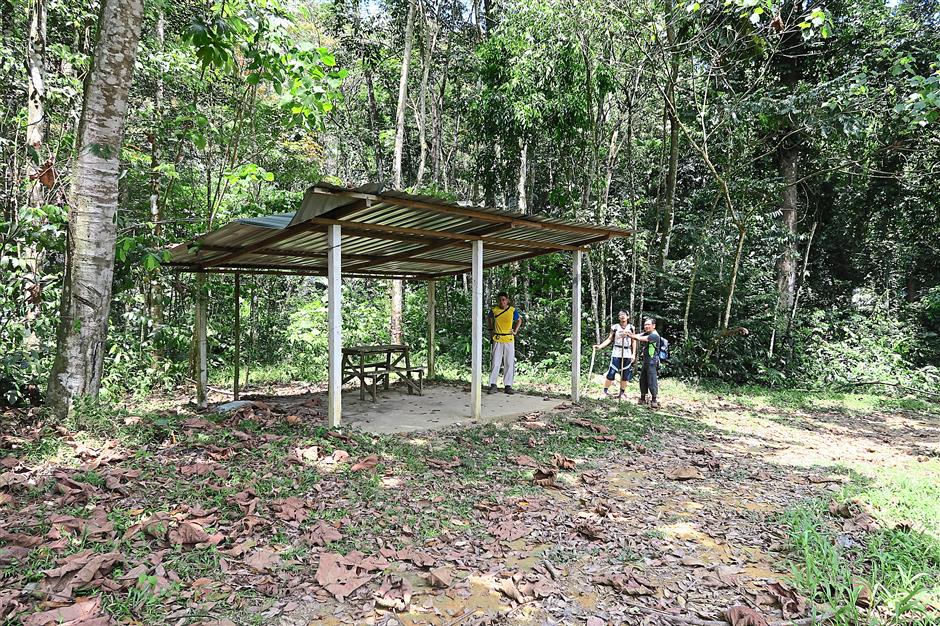 The ‘pondok’ that marks the start of the forest climb.

I tried restoring my sugar levels with a biscuit, but found it too dry and had difficulty swallowing. The heat will definitely take a lot out of you.

While resting, my attention was drawn to a leech on my shoe, slowly making its way up my leg.

Though I had leech-proof socks on, I dislodged my unwanted passenger as I was in no mood to donate blood.

The journey down is usually faster. Perhaps because we were already spent, it still took us about two hours.

Going down the same way we came up, the flattened path we cleared less than an hour ago was not easy to find. The view from the opposite direction was totally different.

After two wrong turns, we wised up and once again followed the marked trees, in reverse order. 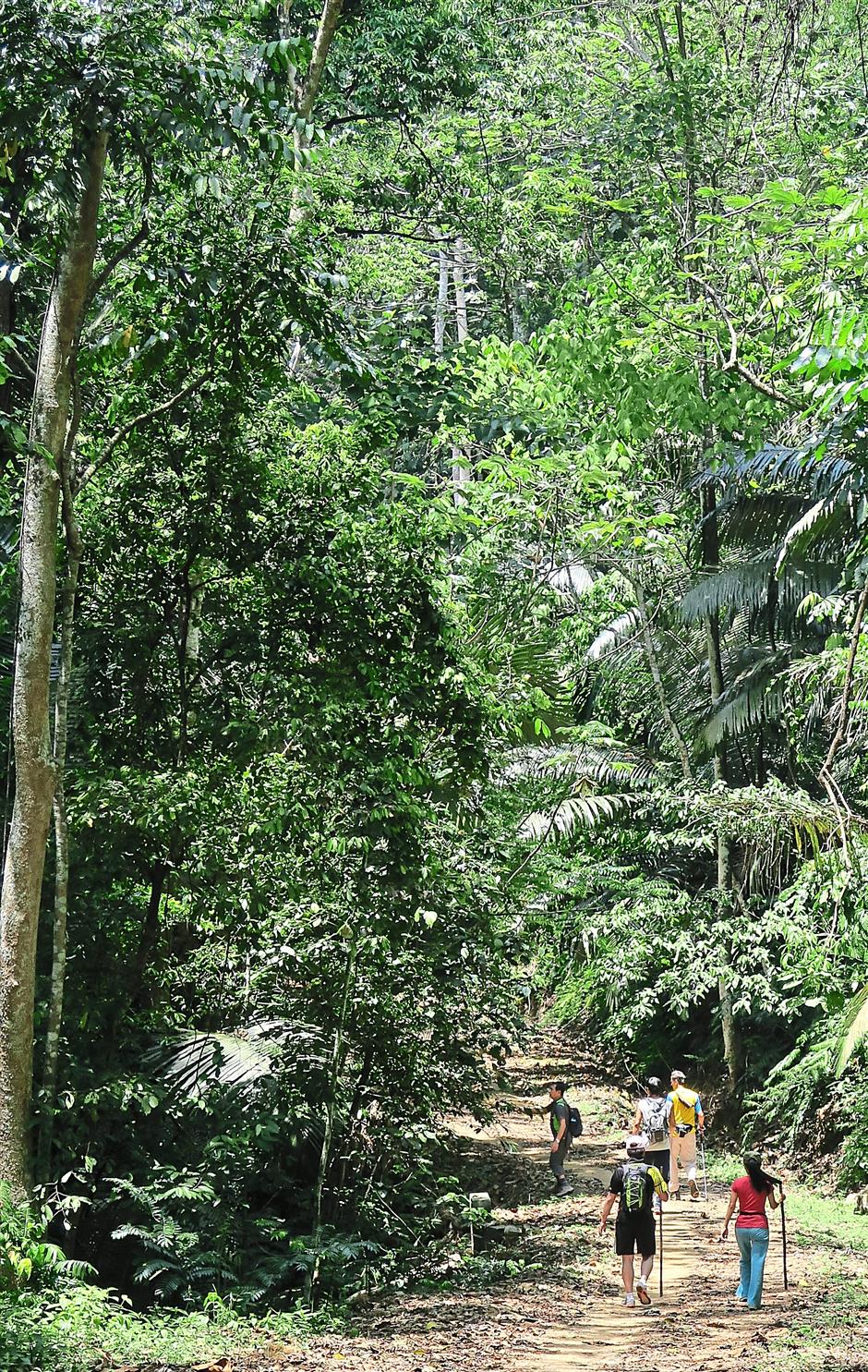 The canopy of trees lining Bukit Hari trail makes an effective shield against the sun.

Back on track, we made good time and I was soon able to recognise landmarks from the ascent. We passed the clearing and pylon and made it to the Pipeline Trail in record time.

The mostly downhill Pacat Trail was a breeze with nary an encounter with the bloodsuckers the trail is named for.

This was so unlike my previous outing here more than a year ago. It had just rained and every single leech decided to have a day out. Despite checking my feet every 10 minutes to remove the slimy creatures, I still had four leech bites at the end of the hike!

Reaching the junction, we turned left, walking on a double-track open trail. We upped the pace, walking briskly for the last 2km. The sun was still out, but less intense.

Despite the cooler air, I was still hot from all the heat my body had absorbed earlier. Proceeding along the pleasant downhill gravel path flanked by tall trees, I could see glimpses of the Botanical Gardens Lake.

At this point, we got off the main trail and went down a narrow path on a grassy slope to the lake.

With the lake on our left, we followed the road to where our cars were parked. We had covered a total distance of 13.2km in five hours.

Founded in 1929 for forestry research, the Forest Research Institute Malaysia (FRIM) sits on a 545ha area adjacent to the Bukit Lagong Forest Reserve in Kepong, 16km northwest of Kuala Lumpur. Through successful reforestation and biodiversity enrichment, FRIM is the largest and oldest man-made tropical forest in the world, as well as the one and only tropical forest research institute in Malaysia.

The once-abandoned tin mine, vegetable gardens and lalang shrubs has been transformed into a verdant forest with a vast virgin jungle. The landscape is mostly covered with closed to open broad-leaved evergreen or semi-decidious forest.

FRIM offers six nature trails, each with its own challenges. Nature lovers will appreciate the multitude of plant and animal species found in the reserve while fitness enthusiasts can take advantage of the paths, slopes and clean air to meet their physical goals.

FRIM was declared a national heritage in 2012, and tens of thousands have enjoyed its pristine, unpolluted environment, just 30 minutes from the city centre.