Custodians of traditional Holy Week celebrations back in prominence

Tradition: Members of the Irmaos de Igreja fraternity in their customary scarlet red, black and white outfits ferrying the statues of Our Lord and Mother Mary at a previous year’s Palm Sunday procession within the compound of St. Peter’s Church.

However, in Malacca, the Irmaos de Igreja (in Cristao, an aged Portuguese dialect still spoken by elders at the Portuguese Settlement in Ujong Pasir) or ‘Brothers of the Church’, the sole custodians of related ceremonies, rituals and processions will be back in prominence when Holy Week gets underway at the 305-year old Church of St. Peter in Pengkalan Rama from March 29 to April 4.

Described as the oldest servicing Roman Catholic fraternity in the region, the Irmaos de Igreja till today adheres to unique ceremonial aspects with regard procedures, vestments, paraphernalia, devotional prayers and hymns, introduced in Malacca by the Augustinian missionaries in the 16th century.

This fraternity was initiated and founded at the Rosary Chapel in 1549 by a Dominican missionary Padre Gaspar da Cruz.

This chapel ruins still stands at a stone’s throw from St. Peter’s Church along the upper reaches of Jalan Bunga Raya adjacent to the old Federal Theatre.

The ruins is listed as a heritage site under the purview of the Ministry of Culture, Arts and Heritage.

Holy Week celebrations, traditionally starts off on Palm Sunday (March 29) explains the current president of the Irmaos de Igreja Oliver D’Souza. It then leads to Maundy Thursday, Good Friday and winds up with the Easter Vigil on April 5. 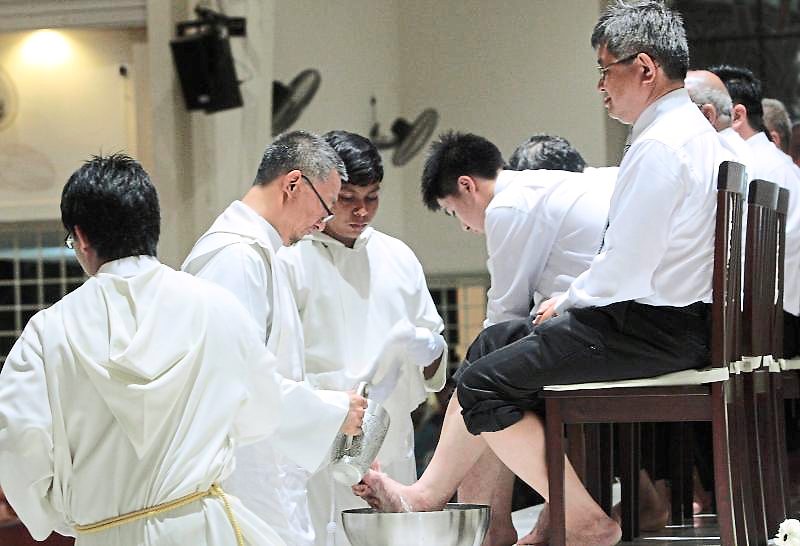 Duty to serve: Father Simon Yong washing the feet of several men at the Church of St Francis Xavier for Maundy Thursday mass previously. On Maundy Thursday, twelve men from the congregation volunteer to participate in the washing of feet, which commemorates what Jesus did for his twelve apostles at the Last Supper. – filepic

For the locals of Portuguese descent most of whom are Catholics, Holy Week is one of the major religious celebrations in their lives that underscore much Hispanic traits and influences.

Like Festas San Juan and San Pedro (feasts of St. John the Baptist and St. Peter observed in late June), it spells reunions for local, outstation and overseas community members who make it a point to ‘return home to their roots while catching up with family members, relatives and childhood friends.

Apart from Holy Week and the feasts of St. John and St. Peter, the fraternity also organises processions relating to Marian devotions especially on feast days linked to the Blessed Virgin Mary in May and October at Praya Lane’s Assumption Chapel and the Portuguese Settlement’s Our Lady of Immaculate Conception Chapel.

Most of all the traditional procedures, ceremonies and rituals for Holy Week and also San Pedro and San Juan were passed down to current members by their community ancestors and forefathers. The pioneers were the ones that also safeguarded the Catholic faith against persecution when Malacca was under Dutch rule from late 1641 till 1825.

It has been an uphill struggle for the Irmaos de Igreja to continue with the “privilege” of organising Holy Week processions just like it is still undertaken in Larantuka in Flores, Macau and Goa.

But resilient as it is, the fraternity has stood firm against change.

“We are a group that only admits male members after careful consideration, and they have to be of Portuguese descent. Fathers who are members can be replaced by their sons,’’ said D’Souza.

New recruits under also put under probation. Also, it is unlikely that we will change our minds about admitting females, a stipulation that stood steadfast from inception,” he added.

The crowds converging at St. Peter’s comprising both Catholic and non-Christian pilgrims and devotees from all over Malaysia and Singapore as well as local and overseas tourists and visitors during Holy Week have been growing in numbers in each passing year.

Inclusive of the curious and uninitiated, they all drop by to witness one of its kind religious proceedings in Malaysia which have withstood the test of time only at this edifice built in 1710.