Refreshing relish on the side

Pajeri nenas is a popular Malay dish that has Indian roots.

It is derived from pacri, or sometimes spelt pachri or paceri, which is usually translated as relish, chutney or salsa.

In Goa, India, it is called pachedi, and can be made with any fruit or vegetable to go with rice and curry.

It is quite similar to pachadi in Indonesia, which is a richer version that contains coconut.

However, we have stuck to the classic form of the recipe without coconut, where it is served as a refreshing relish to go with other richer foods.

This is a vegan dish, but you can add dried shrimp or fish if you want to round out the dish with some umami flavour.

Traditionally, however, pajeri is served as an accompaniment to nasi briyani and mutton curry.

You may also use canned pineapples for this dish, although it will tend to be sweeter because of the syrup.

Be sure to omit the sugar in the final seasoning if you are using canned pineapples. After adding the pineapple stock, bring it to a boil. Then, add pineapple slices. — Photos: YAP CHEE HONG/The Star

1. Remove the pineapple skin and eyes, slice into rings and remove the core.

3. Heat cooking oil in a sauce pan and saute ginger and spice blend for about 5 minutes until wilted. Add cinnamon stick, cloves, star anise and cardamom and saute until fragrant.

5. Season with vinegar, turmeric powder, sugar and salt to taste. The pineapple's skin and eyes are removed first before being sliced into rings and before removing the core. 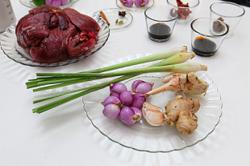