Roasted whole lamb can be enjoyed at one of the live action stations for buka puasa at One World Hotel.

ENJOYING comfort food reminiscent of kampung living is a treat after a long day of fasting during Ramadan.

Even better are dishes that spark excitement and anticipation for the tasty, familiar flavours that remind us of our childhood.

When it comes to buffets that emphasise local food, I am often drawn to the kerabu section and my mouth starts to water when looking at the colourful selection of fresh, mixed sour, sweet and spicy appetisers.

The trick is to start slow, so I filled my plate with small portions of Kerabu Nenas and Sambal Nenas (pineapple salad and sambal), Kerabu Paru, Kerabu Sotong, ulam, Kerabu Mangga, Kerabu Betik and Kerabu Kepah. Some Telur Goreng Belada was added for protein. There was a good balance of flavours in all these dishes. The seafood on ice was another eye-catcher, where fresh prawns, oysters, scallops, mussels and crabs glistened, beckoning diners.

If you are a fan of roti john, they have chicken and beef versions, including Chicken Shawarma, Carbonara Spring Rolls as well as Asian Style Beef and Chicken Pizza.

At the Indian section, the Labu Masala and Sotong Sambal are a must-try. One of the diners raved about the Keema Buritto. There is also a Japanese section where you can have your sushi, sashimi, and maki with assorted condiments.

I can usually control myself at the dessert section, but I had a hard time doing this with the vast variety of Malay kuih and Fried Banana Roll Caramel Sauce.

The Kembara Tujuh Sajian promotion is from 6.30pm to 10.30pm daily until June 4, and priced at RM175 nett per adult and RM90 nett per child from ages six to 12. Reservations are encouraged. 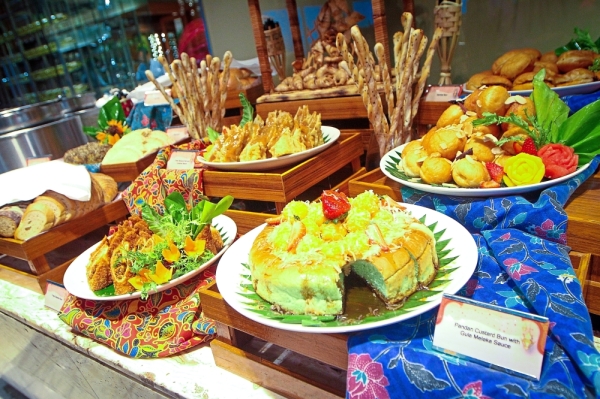 There is an array of desserts to choose from.