A SAKE-PAIRING dinner is not something you come across every day, so it came as no surprise that what was initially a one-night affair got extended to one-and-half months following demand.

The six-course sake dinner at Intercontinental Kuala Lumpur is a chance for those who thought that drinking sake meant having it either hot or cold, to learn that there is more to sake than meets the eye.

The clear and delicate Saito sake comes all the way from Kyoto, Japan.

To introduce its likeable flavours at the sake-pairing dinner was Kizakura Co Ltd manager Daiki Tojo, who walked diners through the elegant flavours of Saito drinks.

Sake is best appreciated with Japanese food and so naturally, the venue of choice was Tatsu Japanese Cuisine with head chef Tommy Kuan Soon Seng plating up dishes he felt would best complement the Saito flavours. Tojo and Kuan’s decision to introduce a simple palate teaser of Oyster Tempura with Yuzu Dressing paired with Saito Yuzu Hikari proved to be clever.

Kuan said yuzu dressing toned down the strong oyster flavour, so pairing it with a yuzu-flavoured sake helped balance the taste.

Our curiosity to further discover other sake offerings on the menu piqued after savouring the light batter-fried oyster and refreshing citrusy drink.

The uncomplicated Kanpachi Rolled Avocado featuring yellowtail sashimi wrapped around avocado slices and complemented by daikon, baby sprouts, squid and ohba dressing was kept simple for a reason – to put emphasis on the Saito Karakuchi. Tojo referred to the Saito Karakuchi as a reasonably priced drink, milled down to offer 70% polished rice in its making.

“Saito Karakuchi is dry and is often used as a house sake in restaurants.

“It goes well with any kind of food and remains fresh on the palate,” said Tojo.

Tojo said richer-tasting sake could be paired with stronger flavoured food as we were introduced to the Taranome Sprouts & Maitake Tempura served with Saito Junmai.

The strong-flavoured aspect of the food may not be understood by just staring at tempura fried vegetables but bite into them and it all becomes crystal clear.

Often relished during spring, the taranome (type of angelica) was slightly bitter and astringent but in a nice way.

Then we had the earthiness of maitake mushrooms, often used in traditional medicine-making as it is believed to have health benefits.

Both of these, in their way, were strong flavoured. 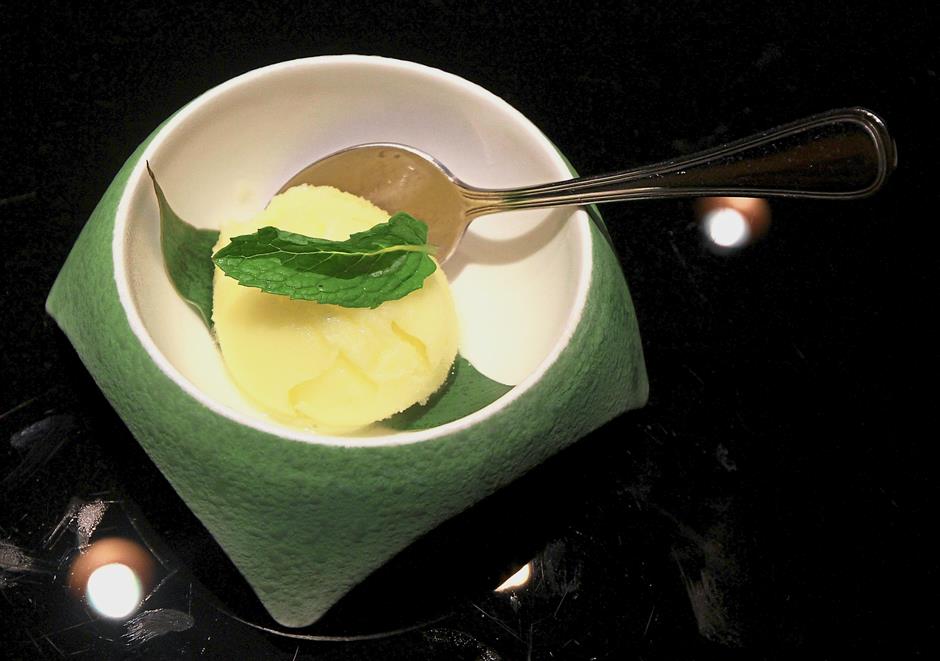 “There are some sake you drink hot and some you drink cold and we wanted to have a sake-pairing dinner to educate diners on appreciating Japanese sake,” said Tojo.

The Saito Junmai Daigino was served next. Tojo said this drink was at its best served cold.

Once again, the highlight was on the sake, so Kuan kept it simple with his rendition of Japan Maguro Sushi (tuna sushi).

The Junmai Daigingo is a versatile drink that goes with a variety of dishes.

Do not be fooled by its mild flavoured and fruity nature as its 15.5% alcohol content is slightly higher compared to the ones we tasted earlier.

“The Saito Junmai Daigino loses its fruity aroma when heated, so it is best to drink it cold or at room temperature,” said Tojo as he walked around the dining room explaining to diners about the drink.

The yuzu sorbet followed soon after, preparing us for a premium drink and Wagyu that would leave us momentarily spellbound. Kuan (right) with Tojo at the sake-pairing dinner at Tatsu.

Kuan’s choice of melt-in-the-mouth Wagyu A5 with asparagus and mixed mushrooms teppan, crispy garlic chips, sake and butter soy sauce for the main course left diners convinced the smaller portions earlier was planned such, so we would have space for the Japan Wagyu A5 Teppan Batayaki.

Described as Saito’s most high-end sake with Yamadanishiki rice grains polished down to 35%, this sweet sake was fruity and smooth with a gentle finish that left quite an impression with diners.

A colourful presentation of Baked Fuji Apple, Matcha Financier, Peanut Butter Soil and a glass of Umeshu closed our enjoyable sake-pairing experience that was priced at RM350nett per person.

The sake-pairing dinner is available until May 16.