Mohd Ridzuan (right) dishing out some of the halal dim sum for customers at his D Aman Dim Sum stall at the Ramadan bazaar outside Darul Aman Stadium in Alor Setar. — Photos: G.C. TAN/ The Star.

FOOD entrepreneur Mohd Ridzuan Mohd Salleh got his first taste of halal dim sum when a friend shared with him a bite-size Chinese dumpling made by a hotel in mid-2015.

That first taste inspired the 30-year-old to venture into the halal dim sum business and he opened a stall to sell the delicacy at a food court in Mergong, Alor Setar, in April last year.

He said business was initially slow as consumers were apprehensive of the dumplings but eventually picked up when he explained that they were halal. Some of his customers became regulars to his stall, including those from outside Kedah.

Buoyed by the reception, he decided to open a stall at the Ramadan bazaar at Darulaman Stadium grounds this year.

It proved to be a good move, as his stall is enjoying a roaring business from visitors attracted to the eye-catching dim sum which come in various colours.

Recalling how he first started out in the business, he said he searched the Internet for information about dim sum and suppliers of halal dim sum after that first taste.

“I found a halal food supplier from Kuala Lumpur who now delivers RM3,000 to RM5,000 worth of halal dim sum per week to me which I distribute equally to my stalls at the food court and Ramadan bazaar,” said Mohd Ridzuan who is from Sungai Tiang in Pendang.

He said while most Chinese enjoyed having dim sum for breakfast, he found that Malays preferred them in the evenings.

Mohd Ridzuan believes that many types of Chinese food such as wan tan mee could be ‘transformed’ into a halal dish for Muslims.

“One needs to change the ingredients from pork to beef or chicken but maintain the original recipes.

“I am in the middle of doing research on wan tan mee such as the skin of wan tan, its ingredients and others.

“Who knows? Next year, I might open up a halal wan tan mee stall at the Ramadan bazaar here,” he added. 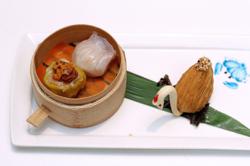 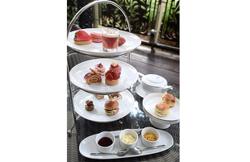 Dainty bites in pink and red