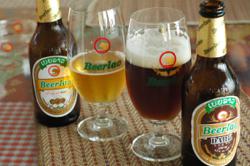 CLOSE your eyes and imagine the warm, spicy aroma of briyani rice, combined with the scent and taste of tantalising siew yoke.

That’s what Malaysia’s first Siew Yoke Biryani from Meat the Porkers is all about.

The brainchild of husband-and-wife team Herukh and Aahana Jethwani, the Siew Yoke Briyani is just one of the many pork-inspired Indian dishes at the eatery.

Dubbing it the Asian porky Indian restaurant, Herukh said he toyed with the idea of including pork in classic Indian favourites.

The problem was, Herukh had no idea how to handle pork and struggled with it.

“I would experiment by making each dish and making my contractors taste it.

Start your meal with the Pork Sheekh Kebab (left) and the Pork Pakora (right).

“I even called my butcher over for dinner to sample the dishes.

“He immediately knew what I was doing wrong and helped me change the meat cuts for each dish,” he said.

Herukh ensures each cut is fresh – not frozen – and delivered daily to be prepared and marinated for the next day’s meal.

The result, although painstakingly long, gave Herukh the opportunity to fine tune and find interesting ingredients that have become the heart of his porky dishes.

When Herukh and his chefs first put the siew yoke in with the briyani, it left a soggy mess in the warm rice.

The eatery’s Siew Yoke Biryani has the siew yoke served on the side along with raita and curry. — Photos: GLENN GUAN/The Star

“So now we take it out and serve it alongside the rice, with raita and curry,” he said.

The crispy pork skin lends a wonderful layer to the rich rice that is both aromatic and tasty while the meat inside is tender.

Appetisers are also a great hit at the restaurant and one must-try is the Pork Pakora.

Cubed pork tenderloin is coated in a gram and corn flour spiced batter before it is deep-fried until golden and crispy.

Alternatively, try the Pork Sheekh Kebab – a combination of minced meat and tantalising spices that is skewered and placed in the tandoor (clay oven). The meat is surprisingly succulent and the tandoor’s smokiness adds to the flavour of the kebab.

Ribs are essentially hard to master but the bubbly Herukh has easily achieved it with the Tandoori Pork Ribs.

The ribs are poked with satay sticks to create holes that allow the overnight marinade to sink in.

Diners can opt to add a scoop of ice cream on top of the Roti Nutella.

“We use honey and brown sugar to get a nice caramelisation on the top.

“Eat it with the three condiments – a homemade tamarind sauce, the mint chutney and Pol, a Sri Lankan side dish made with grated coconut, mixed with chilli and lime juice,” he said.

Herukh wanted to give another twist to a Malaysian favourite, the famous Indian flat bread, naan, and came up with the Bacon Cheese version.

The bacon is sauteed with garlic and butter while the bread is stuffed with good quality cheddar.

Try the bread with two types of side dishes – the South Indian version of Pork Varuval, as well as the Butter Pork.

The varuval is tender and spicy, which cuts through the richness of the food while the butter pork is a rich cashew-based curry that makes a perfect dip for the naan.

“We use lots of cashew nuts to ensure that the gravy is creamy and we also use fenugreek leaves, an expensive ingredient that most restaurants leave out but is essential,” he added.

There is also the Pork 65 Masala, another version of the traditional Chicken 65.

For this dish, the pork is deep fried and then smothered in a thick gravy for added heat.

The varuval is made with a special varuval powder that the team invented, as is with the Pork Vindaloo.

Herukh said the powders helped them prepare the meals quicker without compromising on its great taste.

They also have a tandoori stock that is added to their dishes to give it extra flavour.

Non-pork eaters can enjoy other dishes such as the Palak Paneer, Butter Chicken and Mutton Rogan Josh.

For drinks and desserts, order their Malibu Mango Lassi, a truly delicious Indian inspired drink, and have some Roti Nutella.

The Roti Nutella is made with Romali roti and has the famous chocolate hazelnut paste spread in each fold. Diners can also choose to add ice cream on top. 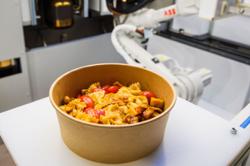