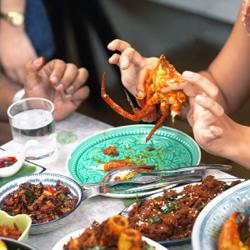 David (right) with his son Adrian who is now the main man at the stall.

The family’s 40-year-old recipe had supported his seven siblings when they were growing up in Penang.

His father, Tan Boon Eng, used to sell mee from a pushcart in Jalan Kuantan, George Town, and David himself started helping out when he was 13.

“All my brothers are in the business of selling Penang curry mee in my hometown.

“He has a stall at the Genting coffeeshop in Green Lane,” said David.

The eldest brother is actively running a supply service in Sungai Pinang, Jelutong.

The chili sauce acts as a catalyst to bring out the flavours of the curry gravy.

The job sees him peeling cockles, shelling prawns and cooking the signature fiery chilli paste and pig’s blood cubes for delivery to other Penang curry mee hawkers around the island.

The Tan family recipe arrived in Kuala Lumpur in 1996 after David fell for a city girl.

But the official version was that David was asked to manage his aunt-in-law’s asam laksa stall in SS2, Petaling Jaya.

After she died, David set up his own business.

His only gripe is not being able to stick to the family’s original recipe 100%.

“Back in Penang, we cook using fresh pig’s blood.

“But in Kuala Lumpur, the suppliers won’t sell fresh blood.

“So we have to buy ready-made cubes from them.

“Pig’s blood is believed to have health properties.

“Customers like hairdressers, construction workers or anyone in a line of work that exposes them to dust, often ask for extra portions,” he said.

David said his father learned the curry mee recipe from a man whose family now runs a franchise business. The difference is the Tans have opted to omit prawn shells from the soup stock for the benefit of diners with seafood allergies.

“In my opinion, prawn shells make the stock too sweet,” said David.

So, what goes into David’s soup is a simple combination of coconut milk, chilli powder, salt and plain water, hence the name “white curry”.

The flavour comes from their chilli sauce.

A big spoonful of this is given with every serving.

Diners have to mix it into the soup before they start eating.

“I can only tell you that our sauce has ground dried chillies mixed in oil fried with garlic, shallots and onions.

“As for the rest of the spices, we have to keep it a secret,” smiles David.

But he assures that minus the pig’s blood, prawns and cockles, the entire dish can be categorised as vegetarian.

David, who started selling this famous Penang tradition in 2007, is confident the family’s recipe will be carried on to the third generation.

His son, Adrian, 24, is now the main man at the stall and his younger son, Alvin, 22, has also just joined the scene. 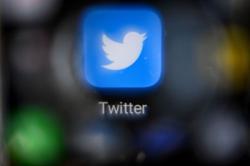 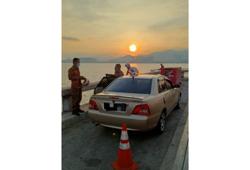