AN ITALIAN and Japanese culinary affair awaits at Villa Danieli of Sheraton Imperial Kuala Lumpur Hotel from now until May 31.

Throughout the promotion, diners can enjoy the flavours of Italian and Japanese cuisine with a five-course menu paired with Frescobaldi wine and Japanese Sake.

It was my first visit to this free-standing trattoria, styled after a country home, and I was glad I arrived early, as it gave me ample time to take in the restaurant’s beautiful interior, cosy ambience and the mural created by Mindy Lehrman Cameron.

The amuse-bouche made a dramatic entrance as it was flambéed upon serving.

Next was the appetiser — tuna tartar layered with crispy beef salami, gari shoga, frisee and glazed teriyaki. This work of art was almost too pretty to be eaten and was paired with the Frescobaldi Pomino Bianco Doc, 2013

This is followed by mirin chicken broth with sansai and potato tortellini with Chitosetsuru Tanrei and Echigozakura Nihonshu. 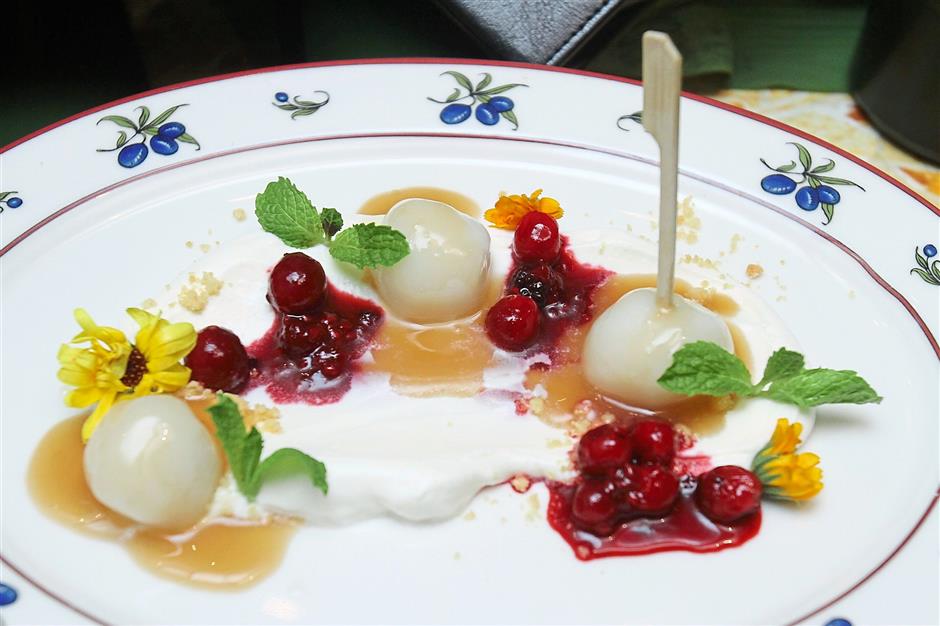 For the mains, patrons have the choice of either beef or fish, both paired with Frescobaldi Castelgiocondo Brunello di Montalcino DOCG, 2008.

However, I opted for the Yamasa-marinated garoupa filled with seared polenta, Chukka Wakame, Golden Ebiko and Dill Voloute.

As for dessert, we had Mitarashi kushi dango with rich ricotta mousse on sable crumble and berries compote. I was looking forward to it as I did not have the chance to try the mitarashi dango (Japanese rice flour dumplings covered in sweet soy sauce glaze) when I last visited Japan.

To counter the sweetness of this dessert, enjoy it with Japanese whisky Suntory Kakubin, which turned out to be really strong. Fusion: The Mirin chicken broth with sansai and potato tortellini is paired with Chitosetsuru Tanrei and Echigozakura Nihonshu.

During the review, we were joined by Erika Ribaldi, Asia-Pacific area manager of Marchesi de’ Frescobaldi, which produces the Frescobaldi wines. She shared with us some wine trivia and entertaining stories as well as this golden nugget of wisdom — “Pair people with wine.”

And true enough, the great company made the wine dinner all the more enjoyable.

It is priced at RM180nett per person for the five-course menu and guests can add RM150nett for the pairing with Japanese sake and Frescobaldi Wine.

For details or reservations, call 03-2717 9900, email restaurants.imperial@sheraton.com or visit www.spgrestaurantsandbars.com/malaysia/kuala-lumpur/villa-danieli