JAPANESE food connoisseurs might frown at the thought of adding apples and strawberries to sushi. Can you imagine the sacrilege of having cili padi (bird’s eye chilli) in a sushi menu?

But when you discover the latest addition to Publika’s food scene, such as the likes of Okonomi, where they dare to include olives, chicken and raisins (much to the chagrin of sushi purists), you will find that the owners and chef have taken on a brave endeavour.

The patrons at Okonomi are no less the adventurous type, ready to experiment in designing their own sushi with choices of 40 different fillings, 16 toppings and 20 sauces.

Upon seeing the menu and order list, we were a bit flabbergasted in deciding what goes with what. “Don’t worry, our waiters are here to help you,” said Arvin Mahendra, who is one of Okonomi’s partners.

Okonomi, in Japanese, means “as you like it”. It opened for business in November and already it has regular customers who have favourite concoctions or their own “perfect creations”. 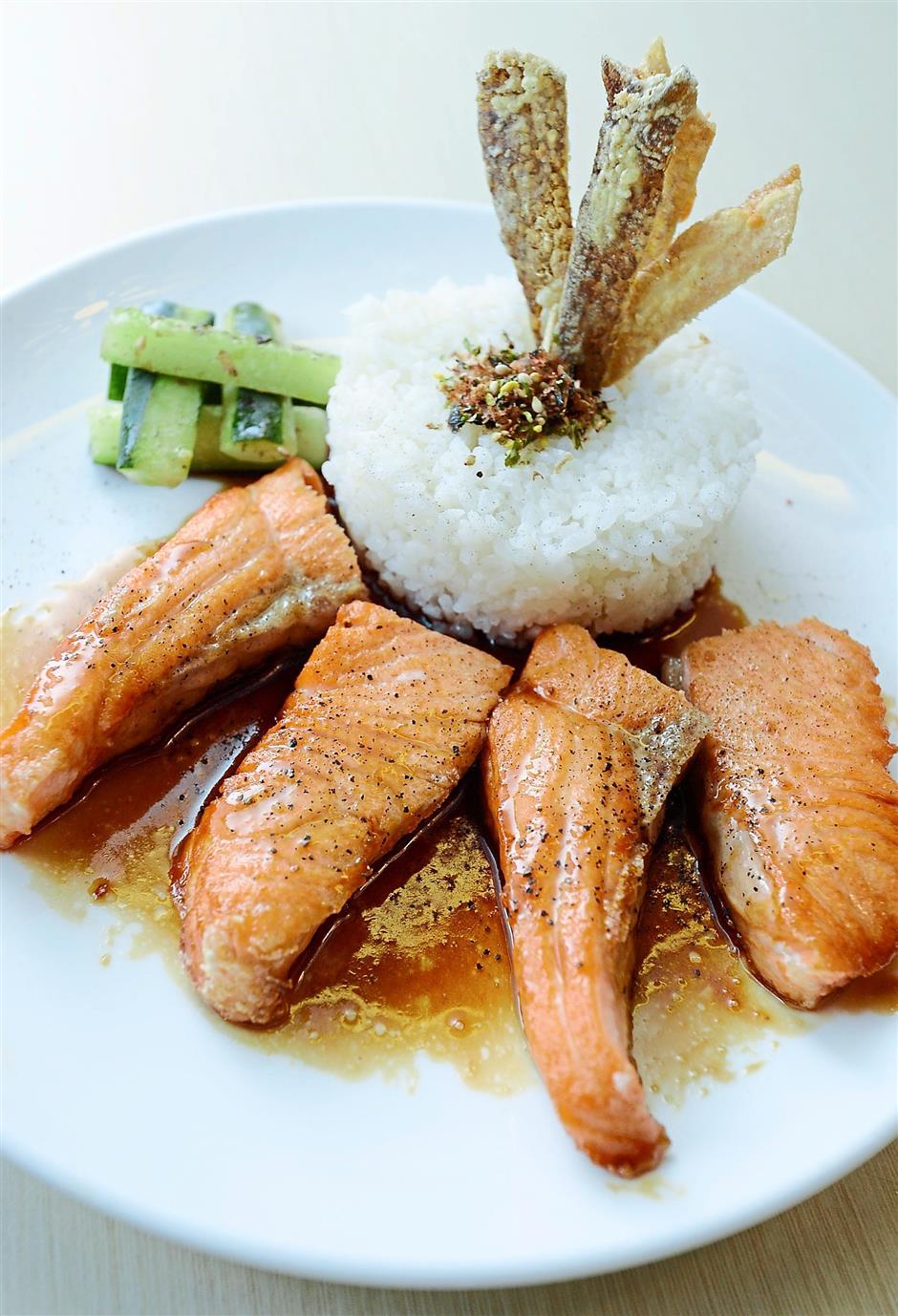 Fresh and tasty: The Salmon Teriyaki is prepared with just the right amount of flavour.

Arvin, together with his two childhood friends – Sandeep Chhokra and Bernard Tang, decided to venture into setting up Okonomi to give sushi fans options. “We did the research and discovered there is a market for people who want something other than normal sushi in a casual, unintimidating setting,” added Arvin.

All three partners come with different expertise under their belt – Arvin has a finance and international business background while Sandeep is in marketing. Tang has experience in the food and beverage industry.

In the open-concept kitchen, Sibu-born chef Alex Lau, who has 20 years of experience in Japanese cuisine, is at the helm. “After mastering fine dining for a long time, switching to semi-fast food is challenging especially when it comes to speed and plating,” said Lau, whose fine dining cheffing involved big players like Nobu and Ichiban.

So how does one place an order? There are three steps – choose your base (white rice or brown rice, maki or uramaki, and seaweed or soy wrap or a salad); choose your filling based on small, medium or large sushi (fruits and vegetables, seafood and meats or premium fillings such as marinated lobster, Hokkaido crab meat, smoked duck or Tempura tiger prawn, to name a few) and choose your sauces, dressings and toppings (ranging from spicy mentai mayo, wasabi mayo, honey mustard and teriyaki, to name a few).

Be sure to read the fine print on the menu for extra charges like upgrading to premium fillings and extra sauces and toppings. 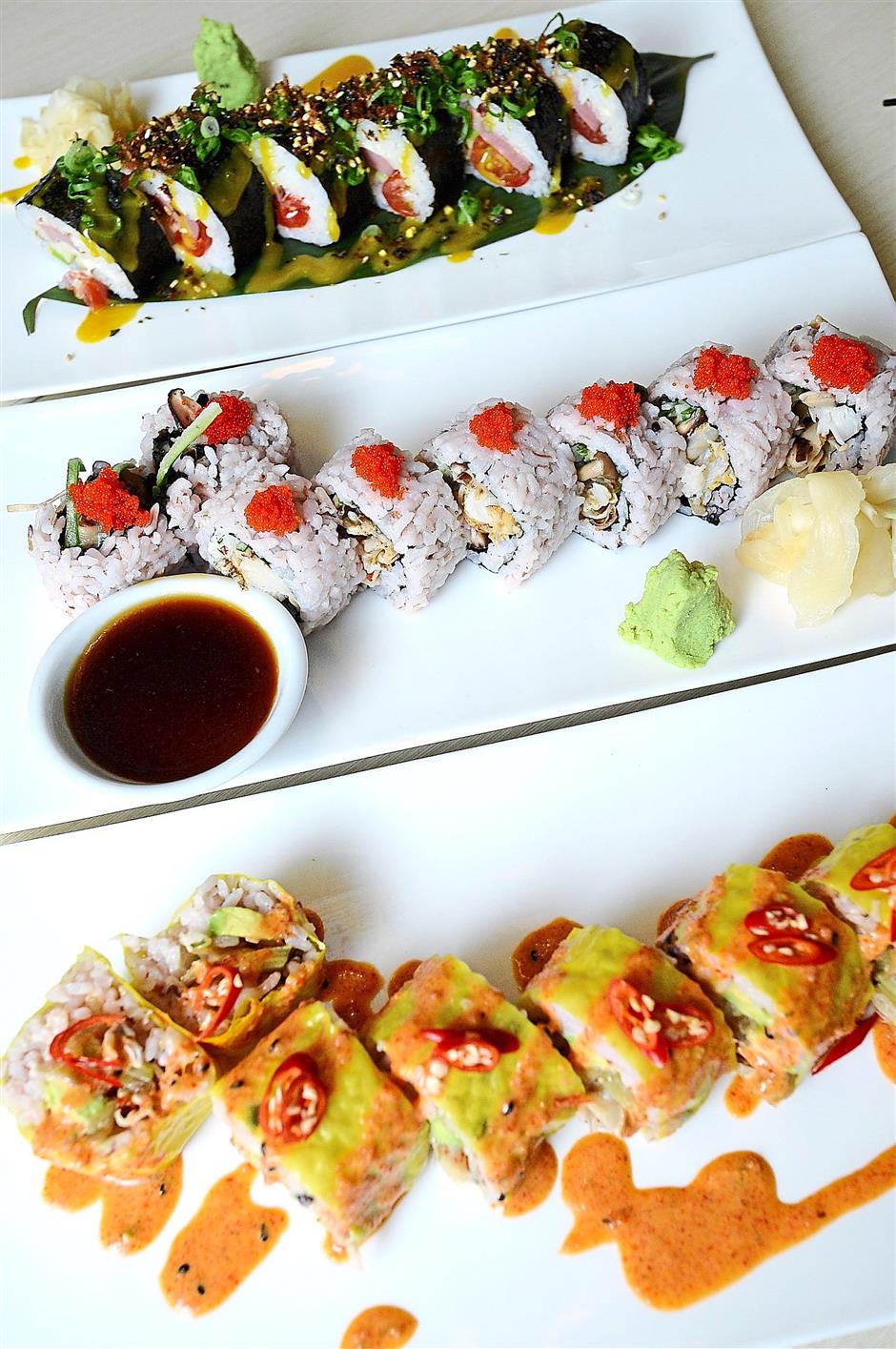 All three sushis had interesting flavour combinations which, surprisingly enough (as it was our first time), complemented each other. Again, proceed with caution with cili padi.

If you find yourself hesitant to be a sushi daredevil, Okonomi has a range of house rolls such as The Seafood Supreme, Veggie Delight, The Health Nut, California Roll and The Firecracker (for chilli lovers). If your tolerance for spicy food is low, we wouldn’t recommend the last one.

There is also the a la carte menu which has items such as Chicken Karaage (caramelised kimchi flavoured chicken tenders battered with cereal) and Salmon Oyako Don (simmered fresh salmon, avocados, tamago and tobiko layered in seasoned rice), both of which are great if you don’t feel like having sushi. The fish in the salmon teriyaki was a fresh catch and prepared with just the right amount of flavour. There is also a generous sprinkling of togarashi (seven-spice chilli powder) on the Salmon Oyako Don. You might want to have a glass of water (or coke) on standby.

They also have salads (we had the salmon salad) as well as rice and pasta dishes.

Dessert fans will not be disappointed with the sweet treats here, as you can choose from lattes and ice cream, parfaits as well as lava cakes and waffles. Our tummies could only accommodate so much so we went with the Azuki Shiratama Parfait – a layered dessert with kanten jelly, matcha syrup, soft serve vanilla ice cream, corn flakes, matcha ice cream, red bean paste, rice mochi and whipped cream, and the Matcha Lava Cake.

If you are a fan of green tea by-products i.e. ice cream and cake, the parfaits and lattes are quite creative and not too shabby.