IN Keeping with the Year of the Wood Goat, a majority of Chinese New Year menus this year will feature mutton or lamb. But Concorde Hotel Kuala Lumpur’s Chinese restaurant Xin Cuisine is staying true to traditional tastes and flavours.

From now until March 5, diners can partake in the restaurant’s wide array of yee sang and festive set menus which are sure to delight.

For a prosperous start, pick from the restaurant’s six varieties of yee sang including variations with shredded duck meat, jelly fish, mini octopus, sliced abalone, Norwegian salmon or even a vegetarian option with Snow Pears.

The different meats and seafood go well with the crunchy texture of carrots, turnips, red pickled ginger, toasted sesame seeds, crushed peanuts and crackers, all mixed with a sweet and sour plum sauce.

During a recent review, we sampled a selection of dishes from three set menus, including a double-boiled soup enticingly called ‘Mini Buddha Jumps Over the Wall’, Steamed Dragon Grouper with Superior Soya Sauce, Assorted Preserved Meat with Rice in Claypot as well as a refreshing dessert dish of Chilled Jackfruit Puree with Sago Pearls and Red Bean.

The soup was a personal favourite as it was flavourful. Premium ingredients such as abalone, bamboo shoots, mushrooms, scallops and sea cucumber provide the dish with its complex flavour.

“There is a legend that a scholar travelling by foot during the Qing Dynasty was cooking a dish containing all his preserved food over an open fire. The smell spread to a nearby Buddhist monastery where monks were meditating. 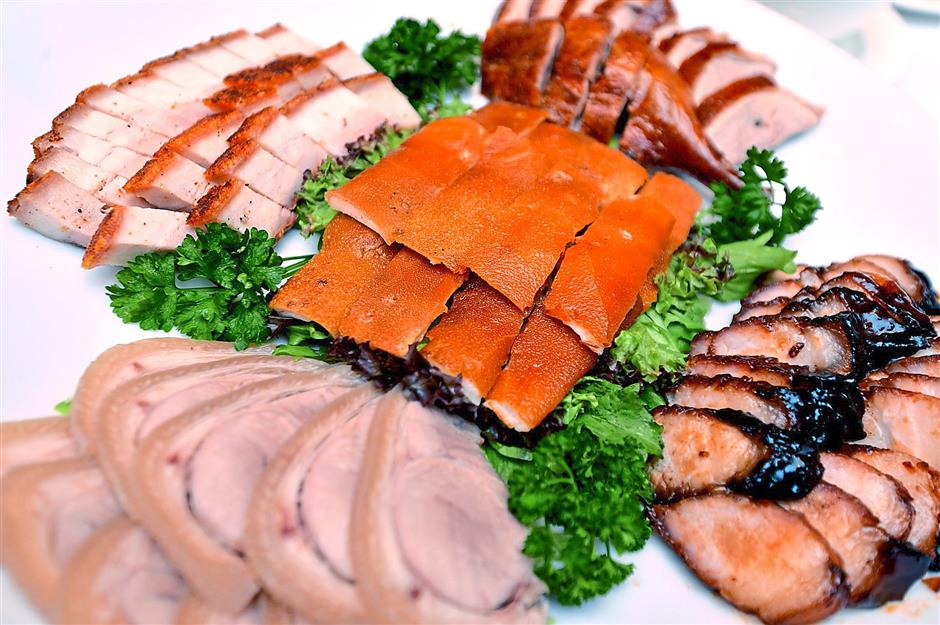 “The smell was so enticing that the usually vegetarian monks jumped over the wall to taste the meat-based dish,” Wong explained.

He said the soup took two hours to cook in order to extract all the flavours from the ingredients.

The Steamed Dragon Grouper with Superior Soya Sauce was a unique combination of sweet and salty.

Chef Wong said he uses hybrid grouper fish with some weighing in at a whopping 10kg.

“This type of fish has a cleaner smell and the flesh is slightly sweet,” he explained.

Cooked with some salted vegetables and bean curd, this dish was a delight.

To satisfy any meat-lover, the restaurant has also come up with the Five Happiness Assorted BBQ meat dish. Comprising of thinly sliced poached pork, roasted duck and pork, suckling pig and BBQ pork, diners have the option of choosing all or selected meats.

To cool down the palate, we had Chilled Jackfruit Puree with Sago Pearls and Red Bean, leaving us with a nice end to the meal. Top man: Chef Wong and his team have whipped up traditional delights for this Chinese New Year.

The three festive set menus — Prosperity Set Menu, Abundance Set Menu and Fortune Set Menu — are priced from RM1,188++ onwards for a minimum of 10 diners, available for lunch and dinner.

Xin Cuisine is closed on the first day of CNY and will resume business on the second day with dim sum breakfast from 9am onwards.