Steamboat dining brings people together over a hot pot of goodies 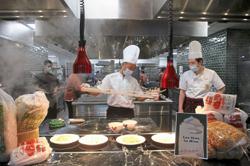 The joy of gathering around a simmering hot pot for meals is a long-practised tradition since the ancient Chinese dynasties, and it is still a popular dining method.

Steamboat, also known as “Wei Lu” in Mandarin, literally translates to “gathering around the hot pot”.

With the mushrooming of steamboat restaurants in Kuala Lumpur, it is not difficult to find a decent one.

A taste of tradition

Stepping into the Dragon Door Steamboat restaurant felt like being transported back to ancient China.

The traditional setting with wooden features was further enhanced by a bucket of glowing ember from the charcoal heating the hot pot.

The person-in-charge of the restaurant, Kim Xiong Yoke, said the whole idea for the restaurant’s setting and cooking method was determined by its five co-founders.

“We wanted to give diners a taste of the old days when charcoal was used to cook food.

“Using charcoal for steamboat is not easy. We buy the charcoal from Taiping where it is produced to ensure good quality,” she said, adding that good quality charcoals did not emit much smoke.

The restaurant serves a selection of four different soups for the steamboat, namely the pork bone soup, fish bone soup, herbal soup as well as the Chengdu spicy soup.

I was served a half pot of pork bone soup and spicy soup and the combination went well together.

The spicy soup was made using Chengdu pepper which gave it the extra kick.

In terms of the soup base and freshness of ingredients, the restaurant definitely nailed it.

Its wide selection of a la carte menu also comes in reasonable portions.

It is by far the best combination I have tasted, it did not compromise on the taste of the food but matched nicely with most of the ingredients, especially the meat.

Kim introduced their house speciality which is their special chicken slices for steamboat.

Its thin layer of meat was almost instantly cooked in the boiling soup and it had a chewy texture.

The restaurant also did well in its taste and presentation of the food. For instance, the seafood platter was nicely arranged in a wooden miniature boat.

Steamboat aside, diners can also taste their charbroil items that consists of pork, mutton and beef slices. Giving tradition a twist: Coco Steamboat restaurant’s pork bone soup in which yam and evaporated milk is added to give a sweeter taste and creamier texture.

Coco steamboat restaurant has definitely made a name for itself after expanding to four branches in the Klang Valley.

Usually packed during weekends and holidays, diners will usually crave for their soup and self-made ingredients and other delectable selection of the menu.

Restaurant founder Wong Woon Chau said one of their specialities was the homemade meat balls with no added preservatives.

“We make a variety of meat balls in the central kitchen and distribute it to the branches to ensure standard quality.

“We prepare the ingredients on the day itself to ensure freshness,” he said.

Wong came from a dim sum background before venturing into the steamboat business.

With years of culinary experience, he tries to stick to tradition but sometimes adds a twist to his cooking to cater to modern taste buds.

“Steamboat usually starts with clear stock but we incorporated the idea to have pork bone soup and nourishing fish head soup.

“We use fresh water carp as the main ingredient and added Chinese herbs like dang gui and Chinese wolfberries.

“As for the pork bone soup, we added yam for its sweetness and evaporated milk for a creamier texture,” he said.

The aroma of the nourishing fish head soup wafted through the air while the flavoursome pork bone soup is to yearn for.

Some of the dishes served are unique such as the Shunde Fish curd and prawn balls.

Digging into their homemade prawn balls was a delight as it comes with a firm texture with a hint of sweetness.