MRT stations designed to tell the story of M'sia 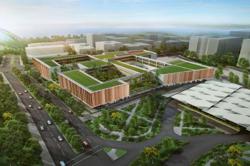 The new underground MRT stations, like this one in Bukit Bintang, stands out with its unique trapezoidal shape and glass and steel structures.

THE opening of 19 new Mass Rapid Transit (MRT) stations complete the Sungai Buloh-Kajang (SBK) line, but there are more to the stations than merely as transit points.

Step up to the entrances to seven underground MRT stations and the graphic and vivid angular structures will grab your attention.

The triangular- shaped roof of the ground level entry and exit point of the Merdeka station takes inspiration from the vents of the iconic Stadium Negara (background).

Few probably know that the underlying concept for these stations was inspired by the Gombak Selangor Quartz Ridge, believed to be the longest pure quartz dyke in the world.

Huge windows at the Pasar Seni station allow commuters to look out along Jalan Sultan and the entrance to Petaling Street. The shape of the windows also mimic the opacity of quartz, the
inspiration behind the design concept for all seven of the underground stations.

Malaysian architectural firm Veritas Architects Sdn Bhd, who was in charge of the Muzium Negara, Pasar Seni, Merdeka, Bukit Bintang stations, said the design concept was a representation of what Malaysia was known for – especially its geographical and natural elements.

Ng says the overarching theme of the underground stations is about telling the history of Malaysia and its continuous growth.

Veritas Design Group principal Ng Yiek Seng said the angulated and trapezoidal shape of the quartz was apparent in the external facade of the stations.

“This theme is also reflected in the landscaping around the stations in various ways through transparent, reflective and angular structures,” he said during a walkabout.

More than the tangible design, however, was the narrative subtly conveyed throughout the stations.

A commuter taking a selfie at the Merdeka station with the iconic image of the late Tunku Abdul Rahman at the proclamation of Merdeka in the background. — Photos: P. NATHAN/The Star

“The seven stations have their own stories, but the overarching theme is about telling the history of Malaysia and its continuous growth.

“While the Pasar Seni station chronicles the founding of Kuala Lumpur, the Merdeka station can be regarded as the epicentre, representing our independence from colonial rule.

Located adjacent to the National Museum, is linked to Stesen Sentral via a pedestrian tunnel-walkway.

The catchphrase here is “Transition”, representing the country’s past recorded in the museum, while incorporating the constant development of the surrounding areas.

Paying homage to the area as a transportation hub, images of old modes of transport including the bullock cart to our very own Proton Saga are subtly displayed on columns.

Outside, the graphic nature of the quartz is clearly seen in the huge sloping windows overlooking the entrance to Petaling Street. Water rippling at the confluence of Sungai Gombak and Sungai Klang is reflected in bright blue panels on the windows.

At the Pasar Seni station, the bright blue panels on the windows represent the rippling water of the confluence of Sungai Gombak and Sungai Klang while its trapezoidal shape is inspired by the Gombak Selangor Quartz Ridge.

Perhaps one of the more photographed stations, the aptly-named Merdeka station pays tribute to the start of modern Malaysia.

Patriotic images are featured at its concourse level and include the proclamation of Merdeka by the country’s first prime minister Tunku Abdul Rahman Putra Al-Haj, as well as text of the Rukunegara.

Look up and you will see that the ceiling pattern is reflective of stripes of the national flag.

The bold yellow stripes on the ceiling of the Merdeka station symbolise the 14-point star on the Malaysian flag.

At the lower concourse, flags of the 14 states are represented on the columns.

This four-level station is seamlessly linked to the Plaza Rakyat LRT station via a walkway, without needing commuters to step out.

The station will also be integrated with the proposed KL118 development (formerly known as Warisan Merdeka), touted as the future tallest building in Malaysia.

The text of the Rukunegara at the concourse level of the Merdeka station.

Conscious of the dynamism of the Bukit Bintang area, the Veritas team chose to express this in trapezoidal shapes in various shades of red.

Commuters have the option of four escalators to exit to street level.