Residents call for removal of abandoned cars in TTDI

By YVONNE NATHAN and NABILAH SHUKRI 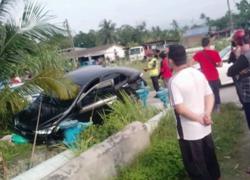 Florence Fredericks, 63, who had been away for several years, returned to her family home at Lorong Datuk Sulaiman 3 and found her once clean neighbourhood now resembling a scrapyard.

“I noticed many abandoned cars along the streets while walking the dog in the neighbourhood in the past month,” said Fredericks as she pointed toward one of the many rusted vehicles on her street.

“Some are turning into habitats for plants and rodents such as squirrels.

“It is such an eyesore for such a beautiful residential area. Most of these cars have probably been left here for years,” she added.

A number of discarded cars were turned into sites for dumping garbage or unused furniture.

Some of the abandoned cars had tires sunk into the soil and road tax dating back to 2010.

Other vehicles had grass growing from its bonnet, moss growing on the road beneath the car because of years of neglect and metal parts stripped off or vandalised.

Traffic notices issued by Kuala Lumpur City Hall (DBKL) were visible on the windshields of several cars – some no longer readable after being left to the elements for years.

Fredericks was disappointed at DBKL’s lack of enforcement as authorities continued to place notices on the cars despite its ineffectiveness.

“The authorities need to find the irresponsible parties and fine them,” she said, adding that the registration numbers should be used to find the owners of the abandoned cars.

Road congestion was another problem resulting from the neglected cars in the neighbourhood and at parking bays in the commercial area.

Several derelict cars were also left directly in front of some houses.

“There are not enough parking spots especially during Friday prayers at a nearby mosque as some abandoned cars are on parking lots,” added Fredericks.

TTDI Residents Association chairman Abdul Hafiz Abu Bakar said this was not the first time he had heard of the problem.

Abdul Hafiz said DBKL put up notices and towed away cars when no one came forward to collect them after a stipulated deadline.

“DBKL has been helpful in this issue. However, to fully get rid of the cars will take some time as DBKL has to be very careful in doing it to be fair to the car owners.

“Only when there are significant signs such as being left for a long period of time and expiry of road tax that DBKL will take action,” he said.

A DBKL representative said there were several steps involved in removing an abandoned car.

“We need to check with the police if the car in question is involved in any cases – if it is not, then we will issue a notice and leave it on the car for seven days.

“If nothing happens, DBKL will tow it and inform the police.

"The car will be brought to DBKL’s depot and the process of disposing of the vehicle takes additional time,” he said.