An aerial shot of a wildfire in northern Miri taken by a drone used by the Miri Fire and Rescue Department.

MIRI: Drones have been proven to be effective in test-runs carried out to deal with forest fires in Miri and Kuala Baram districts.

“The Fire and Rescue Department is borrowing these drones from the Sarawak Natural Resources and Environment Board.

“We are also using certain types of drones used by private companies for mapping purposes.

“These drones have proven to be effective in quickly detecting wildfires in forests and hard-to-reach terrains,” he said.

He added that apart from being able to detect such wildfires, the drones could help firefighters on the ground to locate the nearest access routes to reach fire hotspots.

The Miri Fire and Rescue Department has sent up drones to help in fire detection in parts of Miri and Kuala Baram districts in recent days.

“Because of this hot and dry weather, the risk of forest fires and haze increases.

“Based on previous experiences, forest fires here will become very difficult to tackle once they burn in peat soil.

“There is thus a need to have more effective prevention measures,” he said.

He added that the state authorities decided to use drones to carry out aerial checks and detect fires.

“Aerial checks using drones will be effective in locating the exact locations of any forest fires,” he said at a meeting with the Natural Resources and Environment Board (NREB), the Department of Environment and the Drainage and Irrigation Department here.

Lee said all it takes is five days without rain and a forest fire will be sparked off in Kuala Baram district north of Miri city – making it the most high risk fire hotspot in the state.

Last year, more than 1,700ha of land in the district had been ravaged by fires and the danger of more fires was always looming.

Lee said the people living in housing estates suffered the worst impact especially those with health issues and breathing ailments.

“In Kuala Baram, the fires and also land development have caused the water table to sink lower and this resulted in dried peat that adds to the risk of underground fires.

“We need to have comprehensive cooperation with all agencies, including the Fire and Rescue Department, army and all landowners to put a stop to the annual fire woes here,” he said.

The NREB had inked a deal with four major land developers in Kuala Baram district to implement compulsory standard operating procedure on fire prevention and suppression.

The procedure spells out measures that these landowners must take to prevent and suppress fires on their land.

Lee said the standard operating procedure will be strictly enforced on all other landowners in Miri. 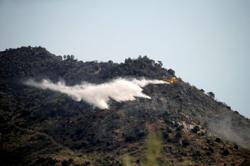