FIRMS in the property and beverage industries in the Klang Valley that outsourced other people to get approval to put up advertisement bunting and banners have been cheated by rogue agencies.

He added that MBPJ would also take legal action against firms for 70 illegal bunting in the SS3 neighbourhood that advertised their properties.

“It was not sent to the Dewan Bahasa dan Pustaka for language verification.

“The Licensing Department did not approve for them to be hung on streetlights.

“We will issue a compound and the Legal Department will prepare the case file,” he added.

Kampung Tunku assemblyman Lau Weng San, who had a joint press conference with Oon, advised all companies to appoint credible advertisement agencies to handle their advertisements.

“Companies in Petaling Jaya and even those from Kuala Lumpur put up bunting to promote their products in the city.

“Most of these are outsourced but the companies must make an effort to double check if the licence sticker is valid,” he said, adding that MBPJ charged RM30 per licence sticker for each bunting.

Lau said bunting found with forged licence stickers in SS3 was a clear-cut case of forgery. 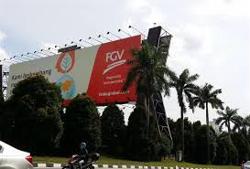