Tangau (third from left) looking at some of the Kacip Fatimah plants which are being grown in Kampung Sagil Parit 2 in Tangkak.

TANGKAK: The Kampung Sagil Petty Traders Association is expected to see about RM100,000 in income through a contract to grow Kacip Fatimah on a 1ha plot of land here.

The pilot project, undertaken by the association, to grow Kacip Fatimah involves 10 members who would eventually expand the project on their individual land.

Science, Technology and Innovation (Mosti) Minister Datuk Seri Wilfred Madius Tangau said the project has potential to see between 2,000kg and 3,000kg of fresh Kacip Fatimah produce per ha for each of its nine-month cycle harvest.

“Based on the current selling price of RM20 per kilo, traders will be able to earn some RM98,000 in profit or a RM8,200 monthly income for the harvest on every hectare,” he said after handing over the project to the association here yesterday.

He added that the project is set to help elevate the lives of rural communities as well as the growth of the herbal industry.

The Malaysian Bioeconomy Development Corporation (Bioeconomy Corp), formerly known as Biotech Corp, implemented the project under the Bioeconomy Community Development Programme (BCDP) after RM24mil for 34 projects was approved under Mosti.

“Members of the association contribute significantly to the local herbal industry by providing Bioalpha with a consistent supply of high quality Kacip Fatimah, which the company will use to create health supplements and other health-based products.

“This is expected to create more jobs, generate additional revenue and increase the social status among the local community, especially since Kampung Sagil has the potential to become a unique tourist destination due to its burgeoning herbal region and close proximity to Gunung Ledang,” he added.

“We are expecting some 600 participants nationwide to take part in BCDP this year, which is expected to have a positive impact on about 2,700 lives.

“To achieve this, we intend to provide more opportunities for the communities to engage in BCDP so the programme can be carried out throughout the country and on a larger scale,” he added.

He also said that as of May, a total of 34 projects, including stevia, mushroom and seeds production involving over 1,900 participants, have been implemented under the BCDP in various stages. Paired road project to be finished by year-end 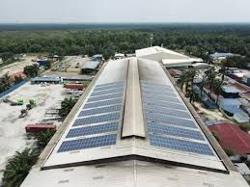