Tengku Adnan is flanked by Leung (left) and Tay during the launch of entertainment and lifestyle hub The Arch.

THE people of Kuala Lumpur can look forward to visiting the city’s largest lifestyle hub with the launch of The Arch at Jalan Tun Razak.

To be developed by Focus Dynamics Group Bhd, the five-storey building is poised to be an urban entertainment centre with food and beverage as well as retail outlets.

The centre is strategically located adjacent to TREC KL, the headquarters of RHB Banking Group and the Royal Selangor Golf Club.

“The company’s strategy is to continue breaking boundaries in creating the latest concepts in F&B and lifestyle establishments.

“Having the Tun Razak Exchange (TRX) across the road cements our belief in building together in this location for the betterment of the Greater Kuala Lumpur region,” he said during the groundbreaking ceremony.

He added that the project would cost about RM85mil and was expected to be completed by the end of 2018.

“As the minister in charge of the Federal Territories, it is my duty to oversee the progress of Kuala Lumpur, Putrajaya and Labuan and ensuring that development is in line with the master plan of the country’s roadmap.

“As such, I am always happy to see the efforts of developers who take lead and contribute to making Kuala Lumpur a world- class business and lifestyle entertainment destination in Asia,” he said.

Other amenities will include a multipurpose hall, Chinese and seafood restaurants, family-themed karaoke centre as well as more than 800 parking bays. 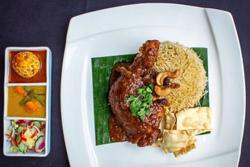