A rider participating in the show jumping competition event during the two-day horse show at the Perak Turf Club.

OVER 60 horse riders from top equestrian clubs in the country gathered at the Perak Turf Club to take part in a two-day horse show last weekend.

Organised by the Equestrian Association of Malaysia (EAM), the riders competed against one another in two competition events – show jumping and dressage, as a warm-up to the remaining two qualifying rounds for the Kuala Lumpur SEA Games.

The two rounds will be held at Selangor Turf Club later this month.

The best riders from each discipline in the qualifying rounds will be selected to represent Malaysia in equestrian events in the SEA Games.

EAM executive secretary Major Yap Mou Soon, who is the show director, said the competitions showcased at Perak Turf Club was a way to get more people to be involved in horse-riding activities.

“We want to encourage youngsters as well as up-and-coming riders, so that they are given the opportunity to compete in national-level competitions.

“The response has been very encouraging so far,” he said when met at the club.

“Based on the riders’ performance in the horse show so far, I can say that the standard of riding is improving with each year, as 90% of the riders here today are expected to attend the final two qualifying rounds for the SEA Games.

“We hope to hold more shows here in Perak to increase exposure of such events to our young riders,” he said.

The EAM also selects national riders and approves riders for overseas competitions. The EAM represents equestrian sports in the Olympic Council in Malaysia. 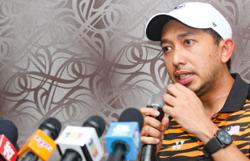