NATIONAL volleyball player Teh Hui Ying has proven that one can be as good in academics as he or she is in sports.

On Thursday, the SMJK Nan Hwa student was named one of Perak’s highest achievers in last year’s Sijil Pelajaran Malaysia (SPM) examinations with her results of 11A+.

“It was totally unexpected. I was thinking maybe 8As but not straight As,” said Hui Ying, who was still taking in the news when approached by reporters at the Perak Education Department in Ipoh where her results were revealed on Wednesday morning.

Hui Ying’s mother, schoolteacher Chin Hee Fong, who turned 58 the next day, could not hide her delight.

“It’s the best birthday present I could ever ask for,” said Chin.

Doing equally well was SMJK Ave Maria student Teh Xin Yi, who will be applying to study in a matriculation course after this.

Xin Yi being given a peck by her mother, Wan Wai Kin, for her results as her father, Teh Kok Kian looks on.

“If given a chance, I would choose to study in the Pure Science stream with Physics as my major.

“My dream is to be an electrical and electronics engineer,” said Xin Yi.

Meanwhile, Randy Ohera Othman has done his community proud by being named Best Orang Asli Student in the state with his score of 2A+, 3A, 1A- and 2B+.

The SMK Raja Chulan student, who hopes to be accepted into a matriculation course in accountancy after this, said he had studied with friends to prepare for the exams.

“My friends are from various cultures. I think many orang asli only socialise among themselves, which is a disadvantage because you actually learn a lot from other races.

“It also helps that my mother is a teacher, whom is always stressing on the importance of education,” added Randy, the second child among five siblings.

Earlier during a press conference, state education director Mat Lazim Idris said a total of 32,509 candidates sat for the exams with 707 achieving straight As.

He added that the grade point average for Perak had increased 0.05 points to 5.17 last year from 5.22 points the previous year. 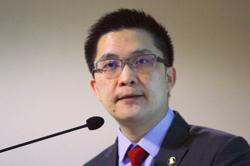