Natalie Chiam, 28, looking at a photo of the elephant mural she took on her smartphone. Also admiring the mural is Cheow Sin Loon, 36. — Photos: MUSTAFA AHMAD/The Star

NINE murals which depict the features and history of Butterworth have been painted on the walls of a back alley in Jalan Bagan Luar to promote the town.

They were completed by seven artists last month under the first phase of a three-phase project initiated by architect Zaini Zainul in collaboration with Think City.

Called Butterworth Art Walk, it is accessible from the side of Lodge 18 Hotel in Lorong Bagan Luar 1.

One of the murals shows two elephants made up of colourful polygonal shapes.

Zaini claimed that numerous elephants once roamed the forests in Seberang Prai and there were so many of them that they were exported to Madras (Chennai) in India.

He said they were also imported from Setul (now Satun) in Thailand during Butterworth’s olden days as an early mode of transport to haul sugar cane and other goods.

“The elephants were herded and kept in an area near the beach which had a pond to provide them water.

“That place eventually came to be called Kampung Gajah which is about 1km from this Art Walk,” he explained.

The other murals show farmers working in padi fields, a one-cent Malayan stamp and the Straits Settlement Coat of Arms.

“The padi fields remind us that Seberang Prai was predominantly an agricultural economy due to the area’s geography and low-lying alluvial terrain that made it ideal for irrigation and cultivation of rice.

He added that a mural depicing a 1kg bag of Prai Sugar was painted on top of a door to highlight this fact.

The art installation made up of food covers suspended across the alley.

A wire-mesh monkey sculpture called Hanuman after the mythical monkey god of the Hindu pantheon which was curated during the Butterworth Fringe Festival last year has been relocated from its original site nearby and now sits perched on top of a pole in the alley.

It is one of four art installations that have already been put up.

Another art attraction is made up of numerous food covers that are creatively hung across a section of the alley to provide shade for visitors.

The remaining two are a flower and tree which are also made from food covers.

Wooden benches have also been set up along the alley for visitors to sit and rest.

Zaini said there would be a total of 45 murals and 10 sculptural installations once the whole project was completed in July.

He said the murals would be painted on the walls on both sides of the alley which is about 200m long. 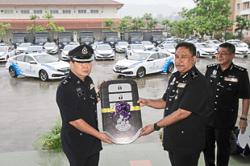