Once-popular field in state of neglect The Astaka field in Petaling Jaya was last upgraded in 2014 and it costs the council RM800,000. The upgrade consisted of returfing and maintenance works. However the field has since deteriorated. There are patches of baldness on the field and this would cause skin abrasion said field users.

Renovation waste is often dumped at the carpark facing the field and beside the river near the motorcycle lane of the Federal Highway.

Park visitors are upset over the poor upkeep of the heavily utilised recreational area.

The state of neglect is glaring and park users want Petaling Jaya City Council (MBPJ) to save the field and the surrounding area from further ruin.

Mosquito infestation also raised concern among the park visitors as the carpark there was flooded with rainwater.

During a visit by StarMetro, the carpark closer to Lorong Utara Kecil was seen used as a temporary hub to store materials for the one-way loop project and in recent months, other waste had been dumped there too.

The field was last upgraded in 2014 and it cost the council RM800,000. The upgrade consisted of returfing and maintenance work.

However, the field has since deteriorated with bald patches visible.

Heaps of rubbish left around the Astaka field.

Regular park visitor Bashir Shariff said the park was in better condition five years ago and had worsened in recent months.

“Five years ago, we could have a pleasant walk around the field.

“Today, the field is poorly kept. Rubbish is strewn all over and it is in such an appalling state. The grass is not well cut, the carpark not maintained and the toilets have been unusable for a few years now.

“The field still attracts hundreds of users on a daily basis.

“Members of the public should be able to enjoy coming to this place,” he said.

He said complaints had been lodged through the council’s complaint hotline, but nothing had been done and the place had worsened over the months.

Another park user Lina Teoh said the field had deteriorated in the past six years and it could barely be used now.

Mahan (left) and Bashir showing the renovation waste dumped at the carpark facing the Astaka field.

“The field itself is in a very bad condition. The grass and soil very badly maintained. The uneven ground, sandy patches and overgrown grass make it very dangerous to use,” she said.

“There are so many mosquitoes here, a sign of just how unhealthy and badly maintained the area is.

“I have never seen anyone fogging the area or cleaning the drains,” she said.

Teoh had often developed rashes after working out at the field.

“The toilets are unusable and in all my years of using the field I have never seen it cleaned, fixed or maintained.

“Astaka is a public space created for the use of all. Isn’t it the responsibility of the council to look out for the interests of the people and make sure it is maintained?” she questioned.

Bashir says the field still attracts many visitors and therefore should be well-maintained for the public’s benefit.

“When I drove past the field last week, I saw the stumps of a chopped tree set on fire. It was done at night and I was shocked. It was burning overnight and it emitted a lot of smoke.

“The following day another tree stump was set on fire. The council should investigate why someone did this,” he said. 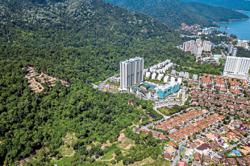