New men at the helm in Penang and Kedah

ACTING Commissioner Datuk Asri Yusoff, who was Kedah deputy police chief from 2007 to 2010, has returned to serve the state as its police chief.

He took over from Comm Datuk Zamri Yahya, who was transferred to Bukit Aman as deputy director of management (services/staffing).

Acting Comm Asri, 58, who was born in Kota Baru in Kelantan, joined the police force on Jan 8, 1984, as a cadet assistant superintendent.

Deputy Inspector General of Police Tan Sri Noor Rashid Ibrahim, who witnessed the handing over of duties on Thursday, commended Comm Zamri for his excellent service in leading the Kedah police force from January last year.

He hoped that both Comm Zamri and Acting Comm Asri would continue to ensure the welfare and safety of the community beside boosting the commitment of police personnel of all ranks to serve the public.

DCP Roslee, 55, took over from DCP Datuk A. Thaiveegan, who has been promoted to be the Bukit Aman Commercial Crimes Investigations Department deputy director.

DCP Roslee was the Penang commercial crime chief from 2009 to 2013.

His last posting before his return to Penang as Deputy CPO was principal assistant director of Bukit Aman’s Secret Societies, Gambling and Vice Division (D7).

The handing over of duties was witnessed by Penang police chief Comm Datuk Abdul Ghafar Rajab at the state police headquarters on Thursday.

DCP Thaiveegan thanked fellow police personnel in Penang for their cooperation during his three years of service in the state. 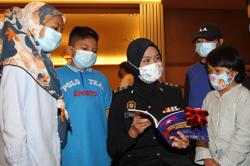