Money changes hands so quickly that people often overlook the finer details and beauty of banknotes.

Bank Negara’s latest exhibition Works on Paper: Art Inside the Wallet gives people a chance to admire banknotes from several countries, some of which date back to the 1400s.

“People don’t look at banknotes closely unless they are rejected by the cash deposit machine.

“Banknotes are not only unique and innovative, some are only second to the national flag as the most recognisable icons of their nations.

“This is why many countries incorporate significant cultural and national aspects into their banknotes,” he said at the exhibition’s launch.

The exhibition highlights how the design and security features were linked to the values and national identity of a nation at different points in time.

The exhibition also showcases the process of designing a banknote as well as the functions of an automated cash centre and a dark room for examining security features.

Bank Negara issued its first banknotes in 1967, and Muhammad said while the icons and security features had changed over the years, one factor is constant.

“Banknote designs have always been drawn by hand, a time-consuming process as the artist must meticulously draw the details.

“All the microlines give a distinctive character but the details are more than aesthetic; the microlines are the first line of defence against counterfeit notes,” he said, adding that no digital copier had ever been able to replicate microlines on the banknotes.

The Works on Paper: Art Inside the Wallet exhibition runs from now until Nov 30 at the Bank Negara Malaysia Museum and Art Gallery.

Opening hours are from 10am to 6pm every day and admission is free. 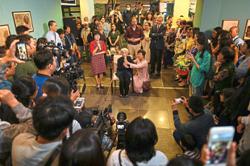