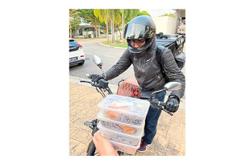 The exhibition on the life and times of Malaysia’s longest-serving finance minister is on until May 29. — Photos: SAMUEL ONG/The Star

HE WAS the only boy among four children who grew up under a familial policy of tough love, with his father telling him, “You are my only son. If I spoil you, you will be finished!”.

Living in a house in Klebang, Malacca, that fronted the Straits of Malacca, the siblings’ daily routine included getting up at 7am to swim in the bitterly cold sea.

As the saying goes, “When the going gets tough, the tough get going” and the strong discipline culminated in great work.

The father and son – Tun Tan Cheng Lock and Tun Tan Siew Sin – both went on to become MCA presidents.

Shortly after World War II, the then Malaya was in a turbulent era where hundreds of thousands of Chinese faced deportation by their colonial masters.

It was Cheng Lock who stepped in to prevent the deportation, fighting alongside Umno and MIC leaders to gain independence for the country on Aug 31, 1957, and enabling the Chinese to get citizenship.

Liow cutting the ribbon to launch the exhibition on Siew Sin at Wisma MCA, Kuala Lumpur.

The country’s history would be very different without the two men.

Siew Sin, who still holds the record as the country’s longest-serving finance minister (1959-1974), had helped lay a strong foundation for the country’s economy.

MCA president Datuk Seri Liow Tiong Lai, who paid tribute to Siew Sin last Saturday, pointed out that this foundation had enabled the country to weather many financial challenges thereafter.

Last Saturday marked Siew Sin’s centennial birthday, and his daughter, Datin Paduka Tan Siok Choo, provided the public a glimpse of her father’s life at an event, organised by MCA, to pay tribute to him.

According to Siok Choo, Siew Sin was born into a family dominated by two towering personalities – his great-grandfather Tan Choon Bock and Cheng Lock.

Choon Bock stayed away from gambling and opium dealings because he believed that “money made from the miseries of others would harm my descendants.”

Cheng Lock also instilled virtues such as frugality in his children.

Siew Sin hated shopping and let his wife, Catherine Lim Cheng Neo, take care of the things he needed, except for his shoes and suits.

While the finance minister was definitely not a fashion icon, he knew how to add value to his wardrobe.

“His suits were tailored by Kwong Fook Wing in Jalan Sultan.

Siew Sin (in white jacket) visiting phase 1 of the Tunku Abdul Rahman College building with officials from the college.

“According to Datuk Khong Kim Lyew, my father always ordered one jacket with three pairs of trousers. Because trousers wear out faster than jackets, with three trousers, my father could wear the suits for a longer period,” said Siok Choo.

Siew Sin and Lim married in 1947 and were blessed with three daughters – Siok Eng, Siok Choo and Siok Lee.

An exhibition on the life and times of Siew Sin is being held in Wisma MCA in Kuala Lumpur, until May 29 as part of the events commemorating his life.