Tasty satay that is a hit with royalty 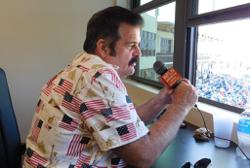 RAUB: A row of food stalls along Jalan Tengku Abdul Samad here is the go to place for tasty satay.

The number 4 stall known as Satay Pak Harun will come to life after 5pm.

Almost every month, the state ruler will instruct his aides to place a delivery and sometimes, request the staff to grill the satay within the palace compound. Sultan Ahmad Shah’s favourite is chicken and liver.

Satay Pak Harun also shot to fame when it was revealed that Najib ordered the dish served to world leaders during several international summits and meetings hosted by the country.

Its supervisor Rosdi Ahmad said previously, they used to set up makeshift stalls at night markets.

“This had been happening for some 30 years before the owner decided to set up a permanent stall here two years ago.

“We have now branched out with one outlet in Kuala Lumpur,” he told StarMetro.

Rosdi, 46, said he could not explain why people kept coming back for more as there were no secret ingredients behind the dish.

He said, however, that the sticks used for the grilling process were from oil palm trees.

“Maybe its the royalty factor, our good service or the media hype.

“We really don’t know but we aim to continue giving the best to our customers,” he said with a smile.

Rosdi is the son-in-law of owner Harun Mat Akhir.

On average, Rosdi said they sell more than 1,000 sticks daily but double that during weekends and public holidays.

He said they also accept catering orders for weddings and other functions.

“During Hari Raya, there will be many reservations, more than we can handle.

“So this year, we are closing our orders early, maybe two weeks prior,” he said.

MCA vice-president Datin Paduka Chew Mei Fun, who was in town for an official function, paid a visit to the stall with her aides.

She also tried her hand at grilling the satay before tucking in.

“This is really good. I never knew we had such tasty satay here,” she said, adding she would help promote the satay and other Raub delicacies.