This bright yellow building’s main entrance is on the traffic-laden Persiaran Perpaduan.

WITH a nine-storey office complex soon to be opened in their neighbourhood, USJ6 residents fear worse traffic and security conditions.

The bright yellow building is located on former Telekom Malaysia land in Jalan USJ6/7, directly opposite the USJ10 Taipan Business Centre, and the main entrance is on the traffic-laden Persiaran Perpaduan.

K.P Nathan, who has lived in USJ6 for 20 years, said he was worried the new complex would worsen the already severe traffic congestion in the area.

“Persiaran Perpaduan is a main road.

“At present, one lane is regularly jammed up by cars turning right into Taipan.

“Once the office block is open, cars will be turning left into its main entrance.

“If there is a boom gate or security checkpoint at the entrance, it will slow down traffic on the left lane as well,” he said.

He is also concerned that this traffic congestion will be aggravated further once the USJ7 LRT station is up and running this year.

Rumours began circulating recently that the office complex with two floors of basement parking lots, was going to be occupied by a college, as the building’s owner Top Speed Property Management is known for its automotive colleges.

This alarmed residents further as a college in their neighbourhood would increase the population density significantly.

“Currently, office workers are already parking in our neighbourhood.

“So even though the new complex has basement parking, it will not be enough.

“There is talk that it may house a college and that is why I want MPSJ to guarantee that it will only be used as an office complex,” he added.

USJ6 residents have been opposing the development of the nine-storey building since 2005.

At the time, more than 30 residents from the 42 houses within 20m radius of the building filed their objections, citing concerns over poor traffic dispersal and illegal parking in their residential area.

Initially in 2005 and 2006, Subang Jaya Municipal Council (MPSJ) ruled that the land could not be subdivided because it was utility reserve land.

However, on April 27, 2010, MPSJ voted to cancel the revocation of the development order and the State Planning Committee then gave the green light for the nine-storey complex.

A traffic impact assessment was done by AZ Traffic Management Consult, which resulted in an “F” rating for saturated traffic in the building’s surrounding areas.

Yet, in May 2011, the Selangor Appeals Board rejected residents’ appeal against the project and the State Planning Committee issued planning permission for the development to proceed under several conditions.

The conditions set by the board included improving traffic flow and that the “development can only be used as an office and cannot be used for commercial purposes such as a cinema, cafes and hotel.”

Subang Jaya assemblyman Hannah Yeoh said MPSJ must ensure that the building, currently up for rent, was used for the purpose imposed by the Selangor Appeals Board.

Top Speed Property Management Sdn Bhd property manager who only wished to be known as Noor Hasanah said the building was approved by MPSJ as a commercial lot.

“It is a commercial building. Regardless of what business a prospective tenant wants to run, they have to first apply for a business licence from MPSJ.

“We can only rent the building to them when they have the licence,” she said, adding that Top Speed Property Management currently had no intention to use the complex for its own purposes.

Noor Hasanah disclosed that no prospective tenants had shown interest in using the premises as a college.

“The building is privately owned and it is up to them to decide the terms of usage.

“We cannot say much but, of course, every business activity has its guidelines. For now, we have to wait and see.

“This project has abided by all the technical conditions set by the council,” he added.

Meanwhile, after years of waiting in vain for a fence promised by MPSJ, USJ6 Residents Association chairman Dr Sairin Salleh said they would take steps to safeguard themselves and their properties.

“The development as well as the upcoming LRT stations will increase traffic and security risks.

“So we are in the process of getting sponsorship for a gated-and-guarded service in our neighbourhood, to curb illegal parking and protect us residents.

“The initial cost will be around RM200,000 to complete the fencing and guardhouse. And monthly, it may cost the residents about RM100 to maintain,” he said.

He added that the residents association was still seeking sponsorship. 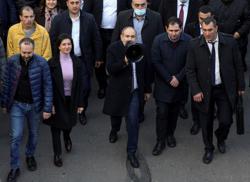