Serving the force for the last 37 years, the 58-year-old cop has vowed to prioritise excellent and efficient services for the public in the Seri Alam area.

Born in Bentong, Pahang, Supt Jokhiri has been serving since May 1979, starting off his career in Johor after training and has had his fair share of experiences in many departments including Narcotics, Criminal and Federal Reserve Unit within the force.

He previously served as the Pontian deputy OCPD for over three years before taking up the role of OCPD, which came along with a promotion to a higher rank, from deputy supt to supt.

With this appointment, I hope to better the quality of police service for the people and strengthen crime prevention efforts here.

“We want the people to feel the presence of police all the time so that they feel safe and combat crime together,” he told reporters after the ceremony at the headquarters here on Monday.

He also reminded officers in charge of police stations (OCS) to step up their game as the state has recorded low levels of solving rates, especially for cases classified under sudden deaths, missing persons and fire reports.

“Upon this appointment, we have fulfilled the OCPD positions for all 13 district police headquarters in the state, so lets move forward to provide better services and ensure the safety of the people,” he said. 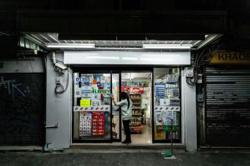